You are here: Home / Food & Cooking / Living With No Refrigeration 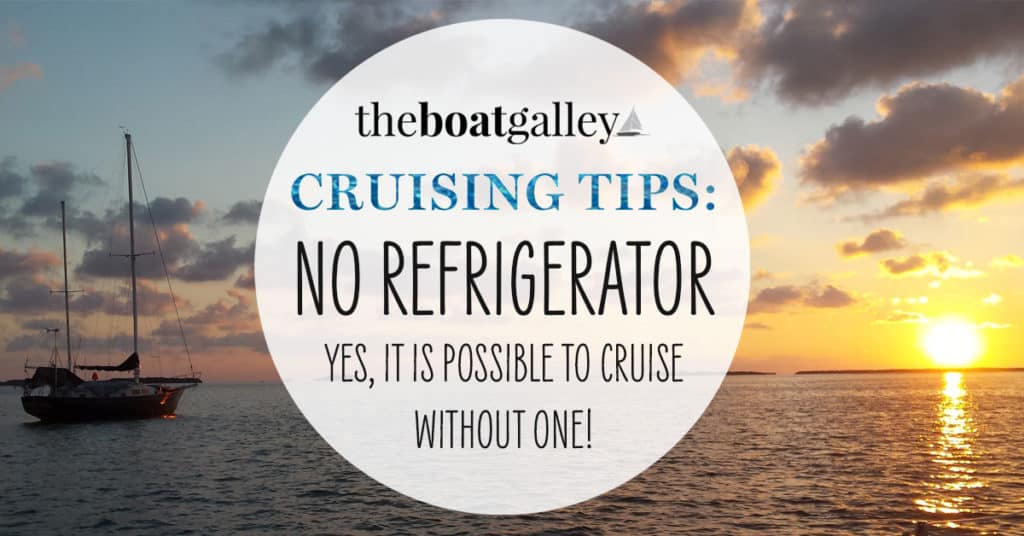 While both our cruising boats have had refrigeration, I’ve done several long-term camping trips without refrigeration.  On four different occasions, Dave and I have gone two months or longer without a refrigerator.  And we ate well!

Even if your boat has refrigeration, it’s a good idea to at least think about what you’d do if it died.  Dave and I always figured that we could just continue on with our plans — no, we wouldn’t have cold drinks, but that was a better option than missing some prime cruising time while waiting for repairs or parts. We could always do the repairs when we were “in town” for other reasons.

Need More Help? Whether you have no refrigerator or a tiny one, the information in The Boat Galley Guide to Storing Food without Refrigeration (229 pages) lets you have great meals, using fresh food, on your next camping or boating adventure. Instead of spending a fortune on freeze-dried meals in a bag, spend just $12 and have fresh fruit and vegetables, meat, milk, eggs, cheese, sour cream and everything else you need for delicious, satisfying meals. Learn more.

I’ll be honest — for long-term cruising and living aboard, having a refrigerator is nice.  But it’s not essential.  Don’t let the lack of refrigeration stop you from cruising, whether for a weekend or an open-ended trip.

The trick to not being deprived is to plan your provisions and meals so that you’re not eating “make do” meals, but real meals. Yes, you can buy those freeze-dried meals and just add boiling water, but they’re honestly not too appetizing for eating day in and day out.  There are lots of better options, using real food.  Admittedly, there are some differences in how you might do things if you set off without refrigeration, versus what you’d stock as a back-up plan.

Canned meat isn’t all Spam and tuna casserole.  You can make a wide variety of meals with canned meat, once you learn a few tricks for keeping it from turning to mush:

If you leave port without a refrigerator, you most likely have a cooler with ice where you’ll stow your veggies.  But if you have refrigeration that gives out, the situation is a little different:  the refrigerator box can be used as a cooler, but you won’t have access to ice until the next time you’re able to provision.

Still, there are lots of veggies that do well even without refrigeration (and this can help stretch a small refrigerator, too):  potatoes, onions, cabbage, carrots, celery and squash will all last longer than you’d expect.  Tomatoes can be bought in varying stages of ripeness and will ripen in sequence.  Oranges wrapped in aluminum foil will last weeks to months.

Most boats also carry a variety of canned vegetables, too, and these go a long way in providing variety if you don’t have refrigeration.  For example, while lettuce is almost impossible to keep without refrigeration (especially with the motion of a boat tending to bruise it), you can make a great salad from canned ingredients.

We always carried a stock of dried fruits such as raisins, dates, apricots, banana chips and whatever else we could find.  Even with refrigeration, many fruits are hard to store on board for very long, and so we used both canned and dried to add variety to the menu.

Eggs will stay good up to a month. Just turn them over every couple of days to ensure that the inner membrane stays moist. And you can do this even with eggs that were previously refrigerated! Read more.

Another option, if you need eggs for longer than a month, is powdered eggs. There are some truly good ones out there! Read here.

Most condiments, such as catsup, mustard, jelly, and so forth don’t really need to be refrigerated.  I’ve kept all of these for 3 to 6 months at a time in the tropics just in a cupboard with no ill effects and not even any mold.

Even though they cost a bit more per ounce, I usually bought smaller containers than I would if we were living ashore, just so that I was opening a fresh container more often.

Mayonnaise and items such as salad dressings that might contain mayonnaise are the most troubling. I never put them in the refrigerator, but always use a clean spoon or buy squeeze bottles so that the contents don’t get contaminated.

True, it’s hard to carry lettuce for a classic tossed salad without refrigeration.  But cabbage lasts forever, and another of my favorite salads uses canned green beans for the base.

A simple vinegar-and-oil dressing is easy to make from non-refrigerated ingredients.  And, to be honest, it’s my favorite!

Butter and margarine aren’t really a problem if you have a cooler or are cruising in temperate climates.  Otherwise, you can use canned butter, available on Amazon, or oil.  Olive oil is great as a “dip” for bread, and canola oil or vegetable oil work well for most cooking.

Milk and Other Dairy Products

While carrying milk and other dairy products without refrigeration can seem like an insurmountable problem, it’s actually one of the easiest to solve.

For milk, you can now buy “boxed milk” in packages like juice cartons in most grocery stores (at mine,  it’s in the Baking Supplies aisle, near the Carnation powdered milk).  If you buy small single-serving boxes, you won’t waste any if you don’t have a cooler.  Boxed milk is available everywhere in less developed countries.

Another option are some of the good powdered milks out there.  Forget the Carnation and generic nonfat ones.  In the US, go to the Latin/Mexican foods aisle and look for Nestle Nido Classic.  It is fantastic!  We also found some great Australian and New Zealand powdered milk in our travels — there are probably others as well.  Use this to make your own yogurt, too — it’s fairly easy and tastes great.

For cooking, cans of evaporated milk work well and can substitute for milk and also for cream.  Evaporated milk isn’t as rich as true cream, but it also has fewer calories.

Also in the Latin/Mexican foods aisle — and in all Latin American countries that I’ve visited — you can find cans and/or boxes of cream and half cream (media crema).  These work well for cooking when you need something richer than evaporated milk, and you can also use them to make your own sour cream.

With all of these great foods that don’t have to be refrigerated, it doesn’t take a lot to be able to eat well without refrigeration.  On a cold day, you can easily make a pot of chili from a canned of roast beef, cans of kidney beans and tomatoes, an onion, green pepper and some spices.  Or a pot of split pea soup with some dried split peas, a can of ham, a carrot and onion and a few spices.

Make my Chocolate Upside-Down Cake for dessert.  For breakfast, have yogurt or a ham omelet.  With a can of shrimp and another of tomatoes and a few fresh veggies, you can make Shrimp Creole.  The list goes on and on!

723 Shares
Some links above (including all Amazon links) are affiliate links, meaning that I earn from qualifying purchases. Learn more.

Living on your boat up on stands isn’t easy. But you can do it. Here’s how to stay safe and comfortable.    [More] How to Live in the Boatyard

Over the years, I’ve used The Boat Galley newsletter to share what we’ve been up to and what we’ve learned while doing it. Here are two posts from a few years back sharing all the important little jobs we did to get Barefoot Gal (and us) ready for the trip. Lots of stuff to do to […]

A question from a friend leads us to list out everything that we’re tackling aboard. It’s extensive and exhausting. We’d still do it again.  [More] Redoing the Whole Boat