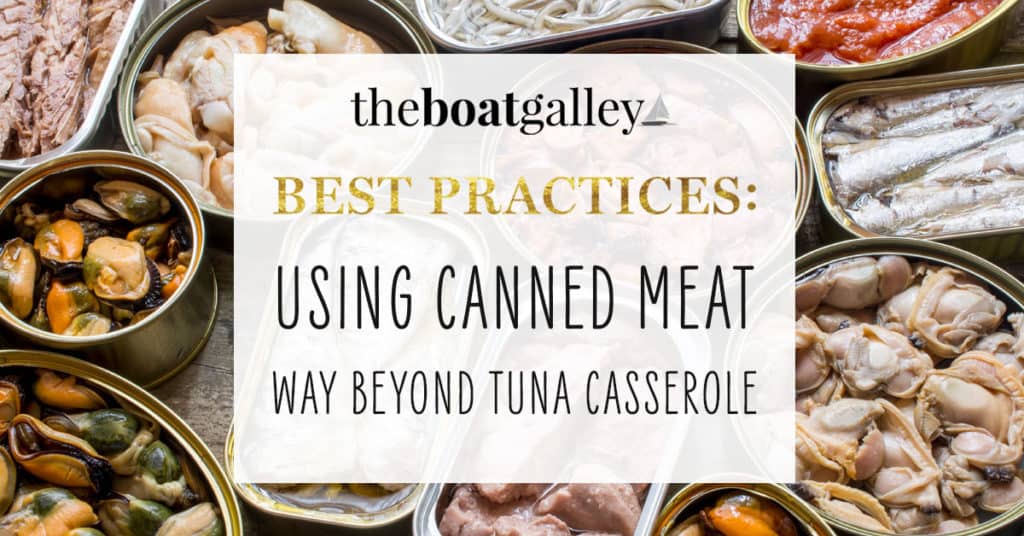 Canned meat goes way beyond tuna casserole!  A wide variety of meats and seafood are available in cans and pouches, and with these tips you’ll be cooking great meals that no one will guess began with a can.

I first started using canned meats on camping and canoe trips, when we didn’t have refrigeration.  And I continued to use them aboard Que Tal to supplement the limited meat supply in our tiny freezer.  We’ve gone for more than two months on several occasions without fresh meat and didn’t feel deprived (we did have access to fresh produce, though).

In addition to being easy to store, canned meat has the added advantage of being quick to prepare since it’s already cooked – translating to less time in the galley when on passage or in an interesting anchorage, and less cooking heat in the boat when it’s hot outside.

It’s not hard to prepare great meals from canned meats.  The canning process tends to take away some of the firmness and flavor of the meat, so the trick is to preserve and enhance the texture and flavor that’s there.

The biggest complaint that most people have with canned meats is that everything in the dish turns into one big blob.  But that doesn’t have to be the case!  You can have great meals with just a little care.  Through the years, I’ve learned a few tips to ensure good results:

I buy most meats in cans about the size of tuna cans – they’re just right for one meal for two people with average appetities.  I use ham, chicken, turkey, tuna, crab, shrimp, corned beef, roast beef, corned beef hash and probably others — I’ve found them not only in the US but also in Mexico, Guatemala, El Salvador, Honduras, and on land-based camping trips in South America and Africa.  More recently, some meats are available in foil pouches, which cost a bit more but are lighter, take up less space and generally have even better texture.

My experience is that the more remote the locale, the greater variety of canned meats you’re likely to find since the local people are unlikely to have much refrigeration.  Mexican fishing villages often had a wonderful assortment!

2.6K Shares
Some links in this article (including all Amazon links) are affiliate links, meaning that we earn from qualifying purchases.