You are here: Home / Food & Cooking / How to Use an Ice Box Cooler for Food Storage 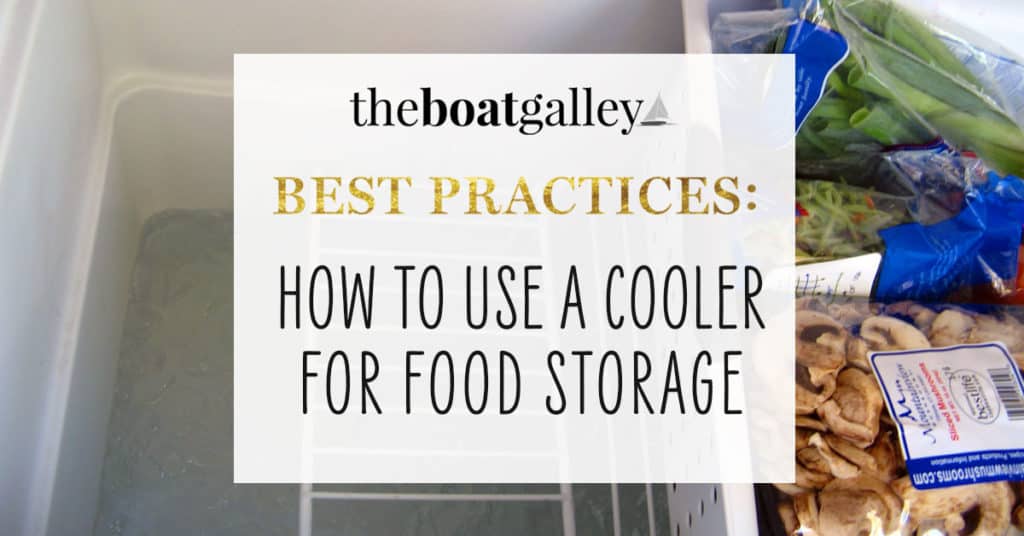 If you know how to use an ice box or cooler for food storage, and a few tricks for making your ice last longer, you can have great meals when you are boating or camping.

Dave and I have done many extended trips where we only had a cooler for storing food. Four times, we’ve gone without a refrigerator for two months or more. And I’ve lost track of how many shorter trips. We eat well on these trips, not just a bunch of dehydrated meals.  Here’s how I use a cold box for food storage.

Need More Help? Whether you have no refrigerator or a tiny one, the information in The Boat Galley Guide to Storing Food without Refrigeration (229 pages) lets you have great meals, using fresh food, on your next camping or boating adventure. Instead of spending a fortune on freeze-dried meals in a bag, spend just $12 and have fresh fruit and vegetables, meat, milk, eggs, cheese, sour cream and everything else you need for delicious, satisfying meals. Learn more.

If you don’t have a refrigerator, using an ice box — a built-in box to keep food on ice — or a cooler set up specifically for food storage instead of drinks gives you a lot more options for food storage. The question is how to do it so the food doesn’t end up soggy from the melting ice.

How to Set Up an Ice Box Cooler for Food

In short, rather than placing food directly on the ice in the cooler — which will melt and you’ll end up with your food sitting in water — it’s far better to get some racks or grates and put your food in bins on the racks.

Before heading to the store, measure the length and width of your icebox or cooler.  If it’s not a rectangle, sketch the space and write down the measurements.

Depending on the size space and your “handy-ness” you can either use several plastic-covered wire “organizers” as shown in the picture, or you can cut wire shelves or grates to size and mount 1×1 strips for the shelves to rest on (you need to be able to easily remove the shelves to replace ice and clean the box, so don’t mount them permanently).

If you use racks like I did, they don’t have to 100% fill the inside of the ice box.  They just have to sufficiently fill the space to form a solid base for the bins.  Two things are important, however:

If you want a heavier-duty shelf, wire closet shelves are available in most home improvement stores and they can be cut to whatever size you need.  They are much sturdier if you’re trying to span a larger distance.

Put Your Food in Bins on the Shelves

Then get some bins to hold your food.  I like the Sterilite bins shown, with solid bottoms (less bruising of produce than having holes in the bottom) and ventilated sides (to allow the cold air to circulate).  I got both the racks and bins in the housewares/storage department in Wal-mart.

Think about what you’ll want to store in the bins and size them accordingly — for example, if you like celery, you’ll need a bin that’s big enough for it!

Depending on the depth of your ice box cooler, you can also get stacking bins and have a double layer.  Put the things that need to stay the coldest on the bottom.  Not only is it nearest the ice, but hot air rises, so it’s always warmest at the top.

How to Make Ice Last Longer

Block ice will last far longer than cubes, although cubes will chill things faster.  For food storage, get block ice when you can — block ice will last 5 to 7 days in a well-insulated ice box even in 90-plus-degree weather (and longer if it’s cooler).  Cube ice will only last one to two days. If you freeze the blocks yourself, remove them from any plastic containers (like milk jugs) before putting them in the cooler — the plastic insulates the ice and less cold gets to your food (see my tips for making block ice).

Put the ice under the racks and the food in the bins on the racks.  If the ice box has a drain, leave it closed except when you need to drain water out. It’s not a bad thing to have some water around the ice as it’s colder than the air.  Leaving the drain open will just let hot air into the ice box.

To preserve your ice and food, it’s best to put drinks in a separate cooler. You’re likely to want drinks more often than food, and having them separate means that you won’t be letting cold out and heat into the food cooler every time you get a drink.  And if the ice melts on the drinks because of opening that cooler more often, you can still drink the drinks whereas food will spoil if the ice melts faster than you expect.

I use the cooler primarily for produce and dairy items. You can also store pre-frozen commercially vacuum-sealed meats for a few days. What looks to be a bottle of ketchup in the photo above actually holds milk — it’s a much better size to fit in the cooler than the box it came in (read more about boxed milk)!

Although I used this system when camping, our meals certainly didn’t seem like we were “camping out.”

Want more info? There’s a book! Available in print, Kindle, or as a PDF:

247.9K Shares
Some links above (including all Amazon links) are affiliate links, meaning that I earn from qualifying purchases. Learn more.