You are here: Home / Food & Cooking / The Best Cooler for Storing Food on a Boat 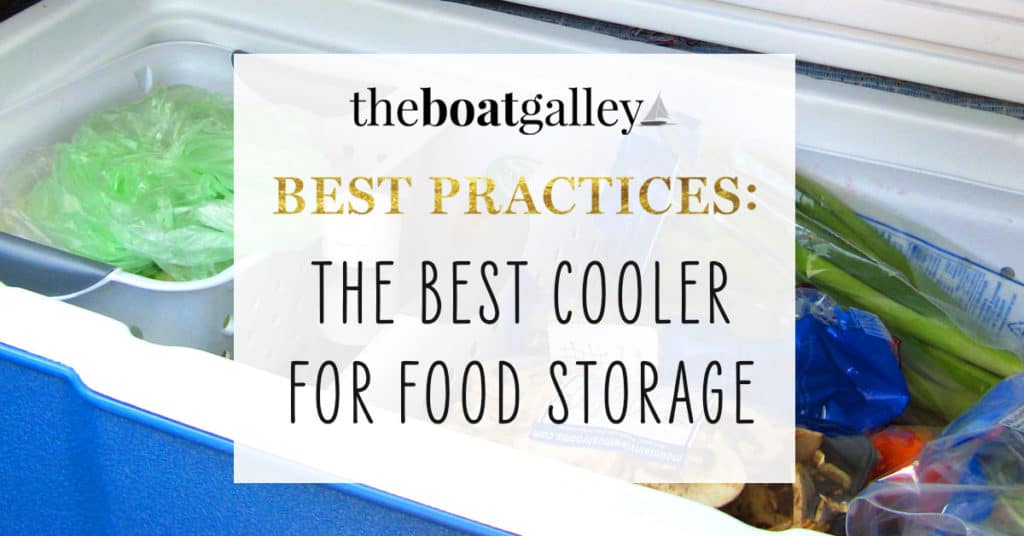 If you don’t have a refrigerator, a good cooler is invaluable for being able to store food and have fresh produce that can’t be kept at room temperature.  With a good cooler for storing food, you have a tremendous variety of foods and menus available, and won’t feel like you’re just “making do.”

But when you start looking at a “food storage” cooler — as opposed to one that will keep drinks or one to keep food cold for an hour on the way home from the store — you’ll quickly see that there is a huge price difference in various brands.  Do you really need to spend $300 (or more!) for a decent ice box?

My basic answer is NO — but it comes with several caveats.  I’ll start by saying that I don’t have any personal experience with using one of the expensive coolers — I have friends and campground acquaintances who have told me their experiences.

I looked very seriously at the expensive coolers a few years ago, before we made a long (2-month) tent camping trip, over half of it in 90+ temps.  I finally decided to start out with a Coleman Xtreme 70-quart cooler that cost less than $50 and see if it would do what we needed.  It did, and we’ve used it on several more trips.

Once you get into the coolers that are marketed as 5- or 6-day coolers, the insulation seems to be fairly equal in all of them regardless of price — about 2″ thick.  The difference between the ones that sell for $100 or under and those going for $300 or more seems to be in the overall construction quality and features.

When to Buy a Tougher Cooler

After I wrote this article, I got an e-mail from Dave on S/V Auspicious, who has direct experience with both cheaper (Igloo) and expensive (Yeti) coolers on offshore passages.

He said, “I purchased an Igloo Marine 72 cooler as part of a “pack” (the big cooler, a smaller cubic cooler, and a seating pad) for about $100. Over the next four years I spent about $300 to replace broken handles, tie down loops, hinges, and latches. When the case of the cooler cracked from cumulative UV exposure I gave up and bought a Yeti cooler. While expensive to purchase initially, two years downstream the Yeti has lived up to its advertised robustness. Perhaps the Igloo is fine for those who loiter in anchorages and only sail in gentle conditions, for those who sail offshore and often the more sturdy cooler ends up being cheaper.”

I’d say his experience fits in perfectly with my thoughts:  if you’re spending time in protected waters, you don’t need the expensive cooler.  But if you’ll be in rough conditions, the extra features and robustness will pay off in the long run.

Tips for Buying a Cooler for Storing Food

A couple of other tips on selecting a cooler for week-long food storage, before I get into my choices:

If you are new to cruising without a refrigerator (and hence maybe not sure of your plans), or have plans to install a refrigerator in the near future, I’d go with one of the cheaper coolers unless you are 100% positive you need the beefier features in the short run.  The expensive ones have their place — I’m not arguing against them.  However, for cruisers who spend weekends or even a week or two at a time on the boat, in reasonably sheltered waters, the cheaper ones will do just as well.

For a less expensive cooler that will need a certain amount of “babying,” I recommend (links are to Amazon; prices are similar at many big box stores and will vary depending on sales):

If you are 100% positive that you’re going to be cruising for longer periods of time without a refrigerator, or need something that can stand up to rougher conditions,  check out the Yeti.  It’s the one brand that almost everyone I’ve spoken with has been happy with.

The other often-mentioned brand of “bulletproof” coolers is Engel (see them on Amazon, about the same price as Yeti — Engel also makes great 12 volt fridge/freezers).  I’ve heard mixed reviews on them — most people liking them, but a few having problems with hinges and latches breaking, although parts could be purchased to repair them.

Whatever cooler you get, pre-chilling your food before loading it in the cooler will really help the ice last longer.

937 Shares
Some links in this article (including all Amazon links) are affiliate links, meaning that we earn from qualifying purchases.