You are here: Home / Boat Work / Find a Fuel Problem on a Boat 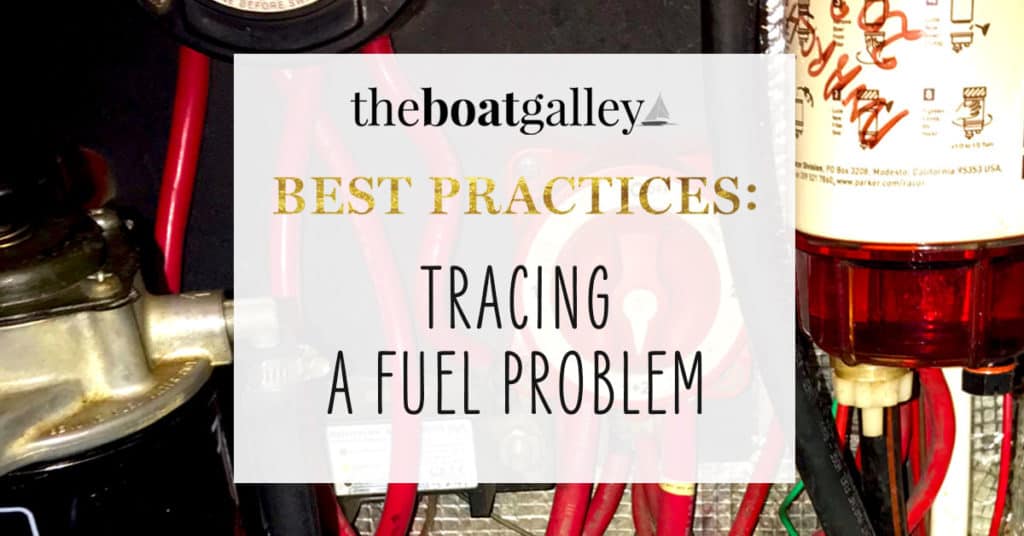 For two months, we worked to find a fuel problem on our boat. Several times, we thought perhaps we’d solved the problem and then when we’d try to motor, we’d find we still had a problem.

Finally, our last fix seems to have done it. We’ve run the engine over 20 hours since then without even a hiccup.

The engine would run fine, then lose RPMs . . . and then come right back . . . and then would lose more . . . and so on, eventually dying. The Westerbeke has an electric fuel pump on it, and if we did the bleed procedure — 30 to 60 seconds of pumping the fuel — it would start again and run well . . . for a while. Then the ups and downs would start again.

Everyone we talked to and all the books we read agreed that the basic problem was fuel starvation. But why? It could be dirty fuel and a plugged filter, a problem in the fuel pickup tube in the tank, water in the fuel that was getting past the Racor, an air leak or even a kinked or collapsed fuel hose.

Finding the Cause of a Fuel Problem on a Boat

We began with the simple, more common problems and then progressed to checking other things that would cause a fuel problem on a boat:

Finally, when we started the engine it ran well. We took the boat out and motored for over 3 hours in 2 to 3 foot waves. We toasted finally tracking the problem down.

The next day, we went out sailing “just for fun.” Not testing anything. Just having a wonderful time.

And as we started up the engine to come back in the harbor, it died. But it started right up again . . . and hasn’t quit again (or had even the tiniest RPM drop) in over 20 hours of motoring.  All we can figure is that there was one last bit of air, maybe trapped in a high spot, that dislodged. We’re now declaring the problem solved.

The lessons that we took away from finding this fuel problem:

861 Shares
Some links in this article (including all Amazon links) are affiliate links, meaning that we earn from qualifying purchases.