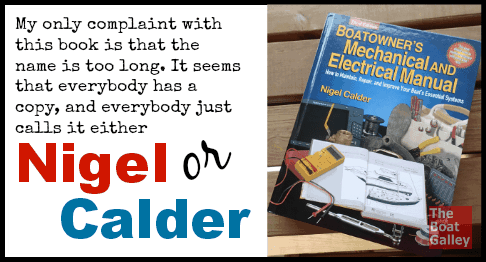 Boatowner’s Mechanical and Electrical Manual: How to Maintain, Repair and Improve Your Boat’s Essential Systems

Wow. That’s a mouthful. And so pretty much everyone just refers to it as “Nigel” or “Calder.” Literally, I’ve never heard anyone refer to it by the title, or even “Mechanical and Electrical Manual.” In fact, if you called it that, I’m not sure anyone would know what book you were talking about.

Now, Nigel Calder has written at least seven other books for cruisers, but whenever anyone just says “have you checked Nigel?” (or sometimes, “what does Calder say?”), this is the one they’re talking about.

We had the second edition aboard Que Tal and used it extensively in troubleshooting various problems. We loved it and recommended it to many others.

In 2005, the third edition came out and it is now about 40% longer (800 pages), largely due to the greater complexity of newer boats and even older boats that have had major refits. In particular it deals with more complex electrical systems and charging arrangements and also talks in far more depth about things such as watermakers and bow thrusters.

I’ve been reading a pretty good chunk of the book over the last couple weeks as we plan some needed upgrades on the electrical system on Barefoot Gal. If I loved the second edition, I don’t know how to describe my feelings for the third. WOW!

UPDATE: In 2015, the fourth edition came out and Dave and I had the opportunity to see one of the first copies at the Annapolis Boat Show — it adds even more.

This is one of those books that almost every boat needs to have aboard, but I have to admit that I’m having a hard time figuring out just what to say about it. It covers:

Whew. And when I say covers, I mean it covers in detail. And not just in words, but with lots of diagrams, photos, troubleshooting charts and more.

One thing that I really like is that Calder does not use photos or drawing from just one manufacturer — which might not be yours. For example, in the diesel engine section on fuel pumps, he has drawings from Detroit Diesel, Caterpillar and Volvo. In another section, he had pictures from both Yanmar and Perkins. Over and over, we’ve found that even if he doesn’t show our exact model of something, he does have one that’s close enough for us to use (generally combined with our owner’s manual) to be able to follow what he’s talking about.

Dave and I are both pretty mechanical, and willing to work on various projects. We’ve found Calder to be a great reference. But we also know a number of cruisers who don’t consider themselves mechanically inclined, yet have found themselves needing to make repairs in out of the way locations. And they, too, have found Calder to be invaluable in giving them the confidence to first diagnose the problem, and then to fix it. And that may be the best part of owning this book — you can do a lot more than you think you can!

For example, early in our cruising it became apparent that something was haywire with the battery charging. This was a topic that neither Dave nor I felt remotely competent in, but it was clear that one of us was going to have to deal with. And so one afternoon, while Dave sailed the boat, I sat below with everything torn apart, reading Calder until I found symptoms that sounded like ours. I did the tests he described and concluded that our voltage regulator was bad. To be honest, I’d never heard of a voltage regulator before we’d bought the boat — and only heard about it then as we inventoried the spares.

And of course, our spare wasn’t identical to the one in use, so it wasn’t going to be a simple swap-out. No, I had to install a whole new wiring harness and everything. But — and this is big — after reading Calder, I understood what I needed to do. Between this book (second edition) and the installation instructions that came with the regulator, I had no problems other than those occasioned by working on a moving boat. I even understood what I was doing in programming the regulator correctly for our batteries (as opposed to a cookbook approach of “do this because I say to”).

My confidence soared with that one episode, and I imagine others have had the same experience. I can’t tell you how many times we pulled out “Nigel” to figure something out. More than one page was covered in grease stains.

The bottom line is that I highly recommend this book, whatever you want to call it (or even if you want to use the full title . . . ). Amazon pretty consistently has the best price, so that’s where I’m linking to. If you buy it elsewhere, make sure you get the fourth edition — it has a lot more info on some systems than the second edition:

It’s available both in hardcover and for Kindle and other electronic formats. I greatly prefer a hard copy of reference materials as I find it easier to flip through real pages to find what I want (I also don’t worry about what may be on my hands). It’s also much easier to to follow many of the tables and troubleshooting charts. So if you are undecided between a hard copy and electronic, that’s my two cents 🙂

A couple of weeks ago, I wrote about Don Casey’s Sailboat Maintenance Manual, and at that time, I was asked if I preferred it over this one. The short answer is No. Dave and I want both aboard (and several others, too).

In general, Casey deals with systems on a simpler level, and deals with far more systems. His book is often a great starting point, particularly when I don’t know a thing about a particular system. But when we need very specific information to deal with a problem we have — basically, something not working — we turn to Calder. In fact, we also have several other how-to books on board as sometimes one covers something that another doesn’t, or covers it in a way that makes more sense to us.

632 Shares
Some links above (including all Amazon links) are affiliate links, meaning that I earn from qualifying purchases. Learn more.