You are here: Home / Boat Work / An Easier Way to Troubleshoot 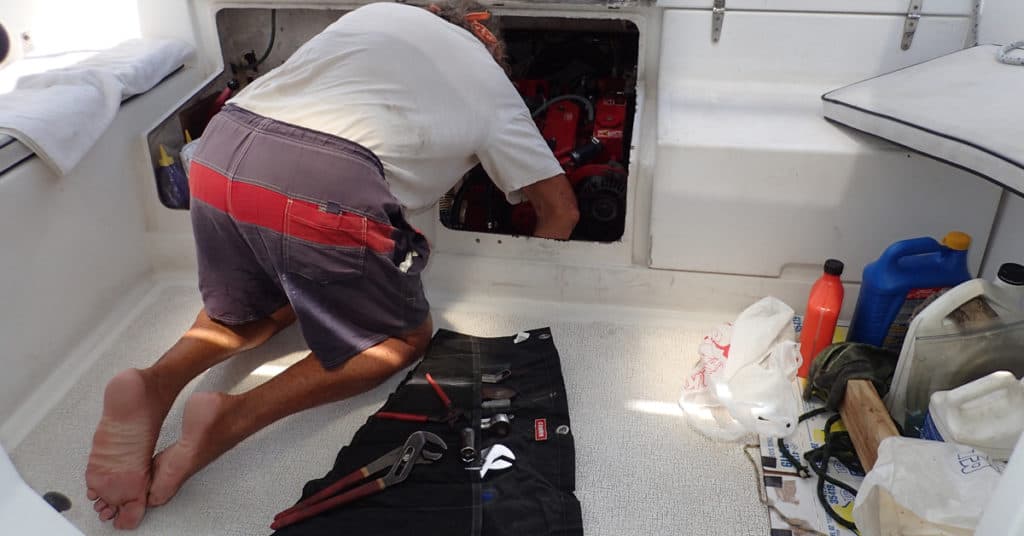 Boats (heck, anything) can have problems. We all know that. But where do you start in troubleshooting?

Most of us start blindly checking things as they occur to us, hoping that we’ll find the problem sooner rather than later. There is a better way!

Two weeks ago, Georgia Hilton posted a great guide to systematic troubleshooting in the Facebook Women Who Sail group, which she also published on her blog. With her permission, I am reposting it here (with slight format editing). In her past life, Georgia did troubleshooting (and repair) for the US Navy; now she’s an ASA instructor, marine technology consultant, sailing coach and delivery skipper.

Hi guys! I’ve been professionally troubleshooting and project managing things for over 45 years, from a light to a worldwide computer network. From swapping out a fuse to tearing down a complete engine. With all the little (and big) things that go wrong on a boat that require troubleshooting, I’d like to offer some insight. This works for your boat, your car, your lawn mower, your house, your computer, everything…

You need a simple systematic approach to troubleshooting or you couple spend all day (or weeks) until you stumble over the issue.

First, it doesn’t matter if you are troubleshooting the Space Shuttle or your toaster. . . there are some very simple steps to make it easier and more logical. These were beaten into me in the US NAVY.

1. Ok, first the OBVIOUS. Stop. Consider. Has this happened before? Do you have specific experience with this problem? If so, then use your knowledge base to resolve it.

Boat owners normally develop a LOT of knowledge quickly and you can draw from that for fast solutions but if you don’t know what the problem is in under 5 minutes then move to step two.

2. Break the system down. Whether its an electrical issue, a mechanical issue, or water is pouring in your boat. Don’t panic, don’t just start looking randomly for the problem. Break down the system. What components are involved? Is the system serial or parallel (serial is something like a fuse between a battery and a light, and parallel is, for example, 10 thru hulls all providing a path for water into your boat)? If time permits, break out a paper and pencil and draw the system to the best of your ability (even if its a simple box, line, box, line, box where the first box is a battery, then the wire, then the fuse, then the wire, then the light). Most systems can be simplified down to basic components.

For example: You have a house battery, an engine battery, a cable from either to an “A-B-Both-OFF switch”, a cable from there to a breaker, another cable to a bus bar, from the bus bar its multiple wires, each going to a breaker/fuse and then to a wire leading to various devices. Draw this and you have a map of the system.

You get the idea… systematically test from the middle. Whether you have a complex system or a simple system, this will radically reduce the complexity and will take less time than guessing and randomly testing. A fuel issue… draw the fuel system, fuel in the tank, tank, fuel feed pipe, water/separator, fuel line, prime pump, fuel line, feed pump, fuel line, fuel filter, fuel lines to engine.

Where’s the middle? start there.

Again, I’m talking about giving you a top-level perspective here. Just about every boat owner knows exactly where to look for a fuel issue with the engine… but….

If you take the fuel example you might start at one end and check Fuel? test one, nope, is the feed pipe clogged? nope, check two, is the strainer full of water? nope, check 3, is the primer pump leaking? no, check 4, etc etc.

For problems in systems with parallel paths… engine won’t start for example, where there could be multiple causes. You need to look at the system and start using the same process on each of the parallel threads. Each path is a system: electrical, water, air, fuel, mechanical. You can normally eliminate one or more paths very quickly and focus down on the offending one with a systematic approach.

In closing, one of my jobs in the US NAVY was to sit and wait for something to break. The problem was the something was a 1 million watt submarine communication system consisting of everything from multiple feeds from various DOD and government agencies, thru comm subsystems, thru crypto subsystems, thru computers, to a single feed to a massive transmitter (the size of a basketball court… the physical transmitter, yes, with power systems and back up train engine-size diesel generators, to an antenna field that took up the entire Greenbury Point in Annapolis.) I was the single tech on duty and I had under 15 minutes to figure out the problem and fix it. If I couldn’t, all hell broke loose and very important people were dragging out of bed in the middle of the night. trust me. I learned how to troubleshoot. I had to deal with cooling systems for the power tubes, raw water and filter water systems, pumps, circuit boards, computers, electrical, diesel, everything was my problem. And the solution to solving simple or complex systems is split it in half until you find the problem.

I hope this helps in some small way when you are faced with a problem on board that is tough to crack.

424 Shares
Some links above (including all Amazon links) are affiliate links, meaning that I earn from qualifying purchases. Learn more.