You are here: Home / Other / Thermos Cooking 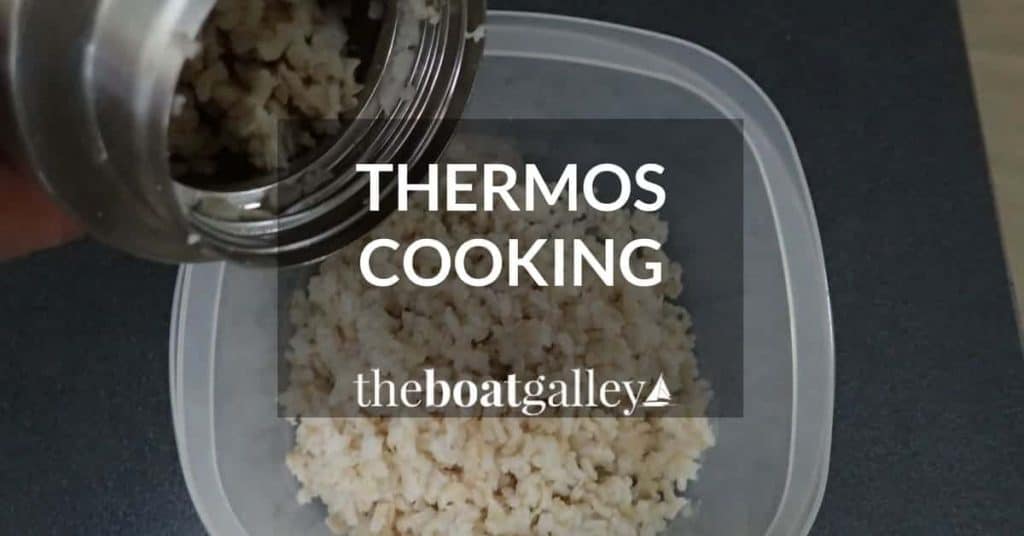 Thermos cooking is perfect in the boat galley!  It saves propane, keeps heat out of the boat, and you get to do something else while the food cooks.  Additionally, Thermos cooking makes using some foods that save space and weight aboard a boat – such as dried beans instead of canned – feasible.

UPDATE: For larger quantities, and for cooking main dishes, take a look at a thermal cooker (I love mine!).

The basic technique is simple:  heat the ingredients, put them in a Thermos, generally let it sit for 4 to 8 hours, then eat.  As with everything, the devil is in the details.  Over the years, I’ve learned 11 key points for successful Thermos cooking.

1. Plan Ahead. Thermos cooking takes time, so you can’t decide to cook dinner in a Thermos an hour before you want to eat.

2. Select the Right Thermos.You need one that is

I particularly like the Thermos Nissan “vacuum bottles” (that’s the generic name for a Thermos).  They are made of stainless steel and get the highest marks for holding heat in numerous reviews.  The 48-ounce Thermos Nissan wide-mouth bottle (1-1/2 quarts) is good for soups, stews, chili, spaghetti sauce and things like that.  The 16-ounce (2 cup) size is good for a single food for two people.  Another good brand is Zojirushi.

Read more about the best Thermos Bottles and/or my Thermos testing (bigger differences than I imagined!).

Beware of inexpensive plastic “insulated bottles” – while they may keep coffee warm for an hour, they simply don’t hold heat well enough to use for Thermos cooking.  They also stain and pick up odors from the foods in them.

Cook Appropriate Foods. It must be something that is cooked in liquid.  Thermos cooking is best for single foods or dishes where everything needs to cook the same length of time, or to pre-cook part of a dish, such as:

Don’t even try to cook the following in a Thermos:

4. Preheat Bottle.Before preparing the food to be cooked, boil water, fill the Thermos, and stopper it.  Let it sit at least 5 minutes to thoroughly heat the inside of the bottle – otherwise, a lot of the heat in the food will be used up in heating the bottle, and not in further cooking the food.  Don’t empty the water until you’re ready to fill the Thermos with food (save the water to use in something else).

6. Brown Meat.  Just as with cooking in a crock pot, anything that must be browned – such as meat and onions for chili – should be browned before being mixed with the other ingredients.  Meat and other ingredients will cook in the Thermos, but it won’t brown.

7. Pre-Cook Food. This was the biggest mistake I made – on my first attempt, I just put all the non-liquid ingredients in the bottle and then poured boiling water over the top.  Six hours later, my split pea soup was still a mass of raw ingredients and lukewarm water.  The heat from the boiling water just moderately warmed up the other ingredients and there was not enough heat to complete the cooking.

Pre-cooking doesn’t just mean putting things into a pan and heating them to boiling, then pouring it into the Thermos.  The cooking has to actually begin before you put the food into the bottle.  Cook things right up to where you’d turn the heat down and let them simmer.

8. Cooking Times. Cooking times will vary, depending on how well the Thermos retains heat, the temperature where the Thermos sits, and how large the food pieces are in the Thermos (smaller pieces cook faster).  The table below provides approximate cooking times for single items.

*Because rice expands beyond the volume of water it soaks up, leave an extra 1” of room at the top

For soups, stews, chili, spaghetti sauce and other things like that, cook them as usual on the stove up to the point where the recipe says to “simmer for x hours.”  Instead, put the food in the pre-heated Thermos and let it sit for approximately twice as long.

9.  Re-Heat if Necessary. Depending on the temperature around the bottle (40 degrees in the boat versus 100), the quality of the bottle, and the total time needed to cook, you may need to reheat the contents so that they will continue cooking.

Until you’ve learned how well your bottle keeps heat in your climate, you should check the contents halfway through the allotted time if the total Thermos time is over 3 hours.  If steam does not rise up when you open the contents, you need to reheat the contents.

10.  Finishing on the Stove. There is nothing wrong with serving food right from the Thermos.  However, for foods that aren’t going to be incorporated into another dish, I prefer to cook them traditionally for 5 to 10 minutes after taking them from the Thermos.  This gives me the chance to add more water or boil some away if needed and add any extra spices that a taste reveals are needed.  But if you’re trying to conserve propane or want something to take along on a hike, it certainly isn’t necessary!

11.  Keep the Bottle Clean. A bottle brush is a big help for cleaning your bottle.  Just use regular dish soap, and baking soda will help remove any food odors or stuck bits.  Do not use steel wool or “Brillo”-type pads on glass liners (can scratch the glass, leading to breakage) or stainless bottles (can cause rust).

Could our cloudy boat windows be saved? Thankfully, we found a product that cleared them with only a little effort.   [More] Clear Cloudy Boat Windows Fast

Give your boat every chance to survive a hurricane. Follow these 11 tips to help it through. [More] Improve your Boat’s Odds in a Hurricane