You are here: Home / Buying a Boat & Gear / Thermal Cooker 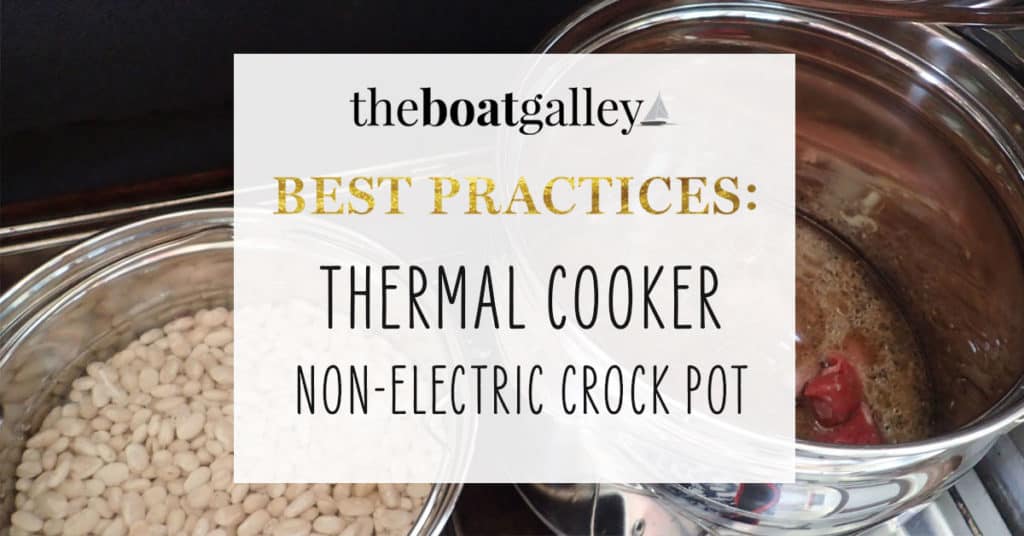 Wow. I love my thermal cooker. It has made getting dinner SO much less hectic. Why didn’t I get one years ago?

A thermal cooker is basically a non-electric crock pot. It’s sort of a really big Thermos, but with a removable interior pan (or two). In short, you start your food cooking on the stove – browning meat, onions, whatever and then adding your other ingredients – and then put the pan(s) into the thermal cooker, put the lid down and let it sit for up to 8 hours.

The food cooks while you’re doing whatever else you want to, and all you do at dinner time is serve up.

You may have seen pieces that I’ve written before about “Thermos Cooking” for rice and dried beans; this takes it to a whole new level of cooking a whole meal.

So What’s the Big Deal?

For me, the big deal is that I can cook whenever it’s convenient for me during the day, and it’s ready when we want to eat.

We tend to do things around the boat in the morning and then do bigger projects or things off the boat in the afternoon. I like to enjoy happy hour with Dave, or maybe we have friends over or go to their boat. For all these reasons, late afternoon is just a really hectic time for me to cook.

In the past, that means that usually I start dinner after we’ve had a drink for happy hour, and then we end up eating at 8 or so. But that’s not good for Dave’s acid reflux. So I try to have dinner earlier, and would manage to do it for a few days . . . then we’d get working on something in the afternoon and we’d revert back to the old patterns.

I’d seen thermal cookers in the past (a reader wrote me about one and I posted it here) and thought one could help, but they were  really expensive for something that I didn’t really know if I’d find useful. The other option that I saw was the Wonderbag (read about it here) and while they were cheaper, they took a LOT of space to store.

Then around Christmas, I saw someone post on Facebook about the Saratoga Jack’s thermal cooker they’d just bought. There were several things about it that really appealed to me, including that it was cheaper (admittedly, still not cheap). I bought one.

All I can say is that I absolutely love it! I use it three or four times a week, particularly on days when I know we have something planned for the afternoon. I’m no longer constantly thinking about when I do have to be done with this in order to start dinner.

In addition to letting me start dinner whenever I feel like it (more on this below), the thermal cooker has other benefits:

Thermal cookers work on a simple principle of having food that is hot through surrounded by hot liquid continuing to cook. The secrets to success include:

The fuller the thermal cooker, the less the food will cool down and the better it will cook. But because it does cool off slightly over time, food doesn’t over cook (unlike what can happen with a crock pot).

Here’s how it works in pictures. I’m making meat for tacos (pulled beef) in the big pan and dried white beans for the next day in the little pan (this was the first day I used it; I learned to put more water in both pans so there was more “hot mass” and less air space):

Bringing both up to a full boil — I like to boil on the stove for about 10 minutes so that it’s not just the liquid that’s hot, but the food in the liquid too. There’s only one lid with the set, but my 8″ round silicone trivet perfectly fits the small pan (buy one here):

Now it’s time to work quickly to get the pans into the thermal unit while they’re still as hot as possible. Take the lids off and put the small pan inside the big one:

Put the stainless lid over both (keep the big burner on until this step is done):

Slip the pans into the thermal container:

Put the latching lid on and place where it won’t be knocked over for 4 to 8 hours (I usually put it in the sink or wedge it on the floor):

Forgot to take pics of the finished dinner, but here’s the next night with white chili (using those white beans) and “recipe-ready” red beans for the next day’s Red Beans & Rice:

Some days, I may start dinner at 9 AM, others at 1 or 2 in the afternoon. How’s that work?

I’ve learned that if I let something cook a little longer on the stove, it needs less time in the thermal cooker. So if life interferes and I start cooking later than usual, I just let it go maybe 30 minutes on the stove and then put it in the cooker. If things really get out of hand, I can even cook dinner completely on the stove in late afternoon, then slip it into the thermal cooker (say while we have a sundowner with friends) and just keep it hot until dinner time.

I wouldn’t say that it exactly takes less actual time in the galley – I still do the same prep work – but the fact that I don’t have to “babysit” a lit stove and can do the prep when it suits me is HUGE.

What Cooks Well in the Thermal Cooker?

Anything that cooks in liquid or has liquid absorbed (such as rice dishes) is a candidate for the thermal cooker. Things that I’ve done and had great results:

Things I’ve done in the top half:

I’ve only scratched the surface of what can be done in the thermal cooker, basically doing things that have plenty of liquid. The Saratoga Jack’s thermal cooker came with basic information on how to use it and a few recipes.

I also bought a thermal cooking cookbook which gave me far more in-depth information and ideas of other things to try – I find the book useful more for the techniques than the exact recipes. I found that I read through it more than using it as a reference, and thus the Kindle version (quite a bit cheaper) was just fine:

NOTE: The author comes to thermal cooking as a prepper and she’s fairly religious, both of which she discusses in the opening chapters of her book; some of her recipe plans are for food storage/prepping as well but can easily be adapted to other situations. Information on buying and using the thermal cooker starts in Chapter 5, “The Basics of Thermal Cooking” with a wide variety of techniques and recipes in the following chapters – she even tells how to make bread in the thermal cooker (I haven’t tried it yet).

Three Options for a Thermal Cooker

A bunch of different companies make thermal cookers. Through readers and my own experience, here are the three I’m familiar with:

You can buy them on Amazon or on the Saratoga Jack’s website. When I last looked, Saratoga Jack’s had considerably higher shipping charges which more than offset the slightly lower price.

There are many other brands of thermal cookers; I don’t have experience with all. The biggest things to consider when looking at them:

Sure, you can find everything on Google. But what if you don’t have internet? Or if you just have messy hands? Our handy kitchen reference comes to the rescue! It has all the quick info you need to keep close in your galley. [More] The Handy Kitchen Reference You Need

5 basic terms to learn, with what they actually mean  [More] Anchoring Basics – A Dictionary, of Sorts!

There are so many things you need to do to help your boat survive a hurricane. Here’s a list that will help you stay focused on this important task.  [More] How to Prep for a Hurricane – The List