You are here: Home / Recipes / My Favorite Pork Chops 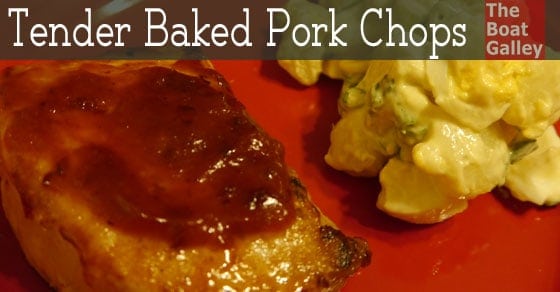 I grew up in Lansing, Michigan and one of my Dad’s favorite restaurants was about an hour away, in Mt. Pleasant.  Called “The Embers,” the specialty was a one-pound pork chop.  And as you left, they’d give you a little folder with the recipe.  We collected a number of them through the years and I often wished I could find one again — I had loved those pork chops and usually requested to go there for my birthday.

Well, The Embers closed its doors several years ago, but I found one of those little recipe folders tucked inside a high school year book just a couple of weeks ago.  And so, for our 17th anniversary last week, I made them.

Well, I have to admit that I changed the recipe a bit — who eats a pound of pork any more?  But they were still every bit as good as I remembered.  So I’m sharing the recipe — but note that this is modified a little from the original to make it a little more “up-to-date” (smaller portion) and “boat friendly.”  If you’re curious about all the changes I made, I’ve listed them below the recipe.

And while it’s written for using pork chops, you can also use a pork roast (it’ll take longer to “cook until tender” though), a pork tenderloin or chicken pieces.

Note that this is not a quick meal to make, and it will heat the boat up some with the baking — great on a special but cool day!  And a nice “company” meal!

If you have the freezer space, you can also cook up a bunch of the pork chops (or boneless skinless chicken breasts) through the “cook until tender” stage and then freeze them (I like to put one in a one-quart freezer bag, makes it easier to thaw the right number, as well as faster).  Then when you want to eat them, you simply the thaw the number you need, make the red sauce and do the final cooking in the oven or grill.

Changes from the original:

606 Shares
Some links in this article (including all Amazon links) are affiliate links, meaning that we earn from qualifying purchases.

It’s the small things that make life onboard more enjoyable. Here are a few of our faves.  [More] 🎧Small Essentials for Life Onboard