You are here: Home / Zon / What You Need to Know About Airpots 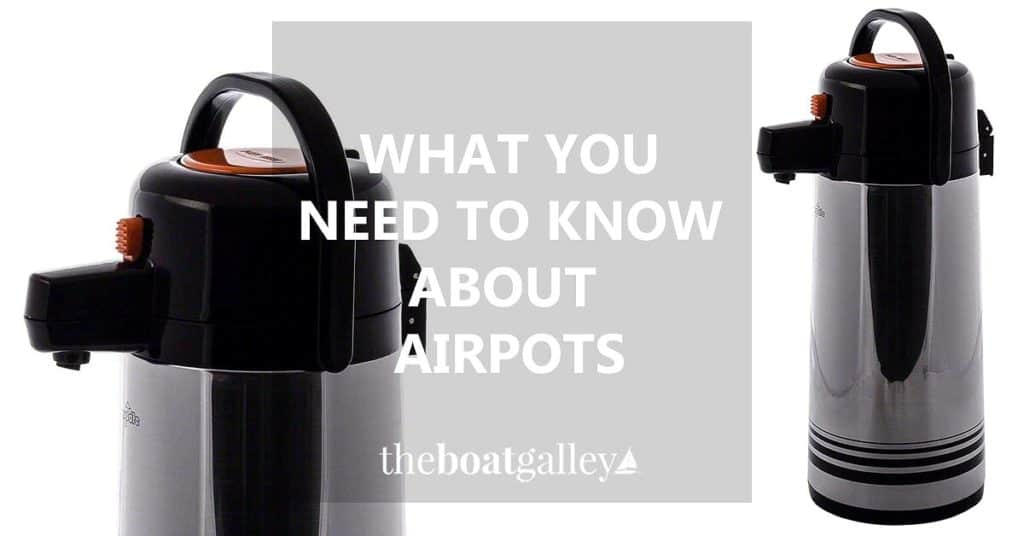 Lots of boaters prefer an airpot to a Thermos bottle when it comes to keeping coffee or water hot.  While a Thermos bottle may be more versatile — you can use it for soups, stews and Thermos cooking in addition to hot and cold drinks — an airpot extremely convenient, particularly when underway.

I’ve been asked a number of times if a bottle will keep coffee hotter than an airpot or vice-versa, and the answer is that there really isn’t a difference between similar quality bottles and airpots.  More on this below, but basically a good airpot will do just as good a job as a good Thermos bottle, but a lesser quality of either one won’t be satisfactory (see an example of a good Airpot on Amazon).

If you’re not familiar with the term “airpot” they’re those pump-style dispensers you find in many coffee shops.  While we see them most often for coffee, they’re also good for hot water, hot chocolate and hot cider . . . as well as most cold drinks (you can put ice or even reuseable plastic or stainless ice cubes in it).

To serve a beverage, you simply hold a cup or glass under the spigot and press on the pump — either a button or a lever. You can make a large pot of coffee in your favorite coffee maker, then pour it into the airpot, or simply boil water and put it into the airpot and let different people make their own instant drinks.

Ditto for cold drinks — you can prepare iced tea, lemonade or another drink right in the airpot, or put cold/iced water in the airpot and let everyone make instant drinks.

Great when on passage and everyone is on a different schedule or when one person is a coffee drinker and one likes tea, and maybe the kids want hot chocolate.  Lay in a stock of Starbucks VIA instant coffee, tea bags and instant hot chocolate and you’re set!

The big advantage of an airpot over a Thermos bottle is the greatly-reduced chance of hot water spilling and burning someone — or, in hot weather, having cold drinks easily available without opening the refrigerator.  Underway, wedge it in the sink so that if anything does spill, it will go right down the drain.

Okay, I said that using an airpot reduces the chances of boiling water spilling.  But yes, you still have to pour the boiling water into the airpot.  Using a teakettle or coffee pot with a spout will make it safer, as will putting the airpot into the sink and wedging it there so you don’t have to hold it.  If you are short and there is a taller crew member on board, get them to do the pouring when conditions are rough so that you’re not lifting the hot pan overhead (I’m short and have had to ask Dave for help at times like these!).

As with Thermos bottles, the insulating ability of different airpots varies greatly.  (Read What Makes a Good Thermos for details on the differences.)  The best ones are those with a vacuum liner; next best are those with foam insulation and worst are those with just “double-wall” construction.  While cheap models are rarely good, buying an expensive airpot is not an guarantee of quality.  While you can find many Thermos bottles with a stainless vacuum liner, most airpots have a glass liner.  While there is some breakage risk, keeping it wedged in place in the sink will almost totally eliminate the chances of it being thrown across the boat and breaking while in use.

With any glass lined airpot (or Thermos), it’s important to pre-warm the unit with warm water before pouring hot liquids into it.  This both reduces the chances of cracking the glass due to the sudden change in temperature and will heat up the interior.

Most airpots have either a stainless or plastic exterior.  The plastic ones have a greater chance of cracking or breaking, particularly when stored.  They also tend to have more problems with breaking the seal on the vacuum — the airpot then loses most of its insulating ability.

The other choice is whether you prefer a push button pump or a lever.  After reading numerous (hundreds?) of reviews, it seems fair to say that levers are both less likely to have problems and take less effort to pump.  Some button pumps also tended to pinch fingers if the user wasn’t careful.  On most lever pumps, the pump can be locked down for storage.  Of course, levers tend to cost a little more on what is otherwise an identical airpot.

Oh, and the difference in color on some pumps?  Orange vs. black?  That’s because most airpots are used in restaurants or offices where they serve both regular and decaf coffee.  Black is “regular” and orange is decaf.  Why orange?  Back when decaf coffee first became popular, the major brand was Sanka . . . and it came in an orange package.  Obviously if you only have one airpot, it doesn’t matter.

Your final choice is size.  Most hold around 2 quarts/liters or roughly 64 ounces.  A mug typically holds about 10 ounces of liquid, so most airpots will hold roughly 6 mugs of coffee or other drinks.  There are some 3 quart and gallon airpots available, too.  One thing to note — if you don’t fill an airpot, the contents won’t stay hot as long.  Therefore, estimating the size you’ll need is important.

Chip Lawson, a reader, recently sent me data from a kitchen counter keep-hot test he’d done on three airpots plus his Thermos Nissan bottle (that bottle was my top performer in similar tests of three bottles).

After 24 hours, the difference was even more remarkable, with the water in the UI Airpot being 136° F., that in the cheap stainless pot 104° F. and the cheap plastic being just above room temp at 81° F.

When Chip tested the UI Airpot against his Thermos Nissan bottle (a standard screw top, not a spigot), they were very comparable.  My conclusion is that a good airpot will keep drinks hot or cold just as well as a good bottle.  Deciding between them should be based on convenience and personal preference, not that one will work better than the other.

In researching this article, I learned that there are many “glass-lined” or “stainless-lined” airpots out there that look virtually identical to those with a vacuum liner.  However, I’d be leery of buying one that didn’t state it was a vacuum liner, as only the vacuum liners are going to keep drinks hot or cold as long as most boaters want (if you’re in a particularly hot or cold climate, a top-quality airpot is even more critical).  Many restaurants go through coffee quickly enough that they only care that it’ll stay warm for an hour or two and hence don’t want to pay the extra for a vacuum lined airpot.

Based on Chip’s tests and additional research, here are my choices (in addition to the slightly smaller one above):

NOTE that the Update International Sup-R-Air line have stainless liners but are not vacuum insulated and hence I do NOT recommend them.

Airpot Bottle Brush — if you use your airpot for anything other than water, you’re going to want to scrub it out.  Standard bottle brushes aren’t long enough, but some enterprising person came up with an airpot brush that works really well (sadly, this products appears to no longer be available; other bottle brushes are only 16 inches and not the 19 inches some airpots require).  Also see my article on Cleaning a Thermos.

702 Shares
Some links above (including all Amazon links) are affiliate links, meaning that I earn from qualifying purchases. Learn more.