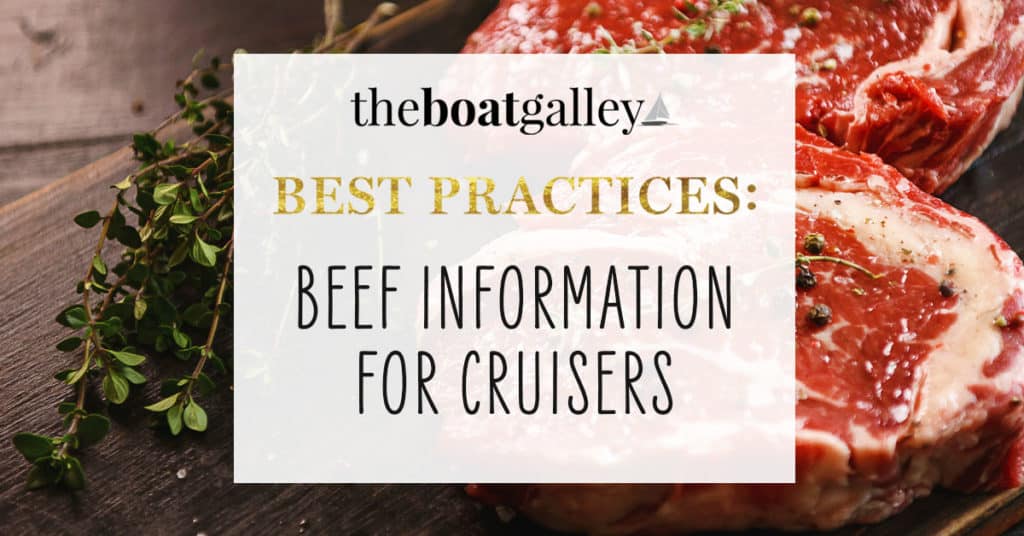 Here are four great FREE downloads for cruisers, three from the Cattlemen’s Beef Board and its consumer information section and one from the folks at Weber Grills.

All are PDF’s—you can click on the link to view the document or right-click and chose “Save Link As” (different browsers may have slightly different wording) and save it to your computer. Each one prints on a regular 8-1/2″ x 11″ piece of paper.

If you’re traveling to Mexico or Central America, the bilingual English/Spanish Cuts of Beef is really helpful. You might want to print it out so you can take it to the store with you—laminate it so it will last forever!  I’ve been looking for a similar chart with French names for the Caribbean, but haven’t yet found one (if you know of one, please leave a note in the comments).

This is a nice chart if you’re not that familiar with different cuts of beef.  It shows a picture of each, which is very helpful if you’re in a foreign country where cuts aren’t labeled and the butcher doesn’t speak English—I found that I often either looked for something that appeared similar, or would show the picture to the butcher, who would then point me in the right direction.

The chart also has little symbols to show the best ways to prepare each cut (skillet, grill, marinate and grill, stir-fry, roast, stew, braise and pot roast), which makes it easy to figure out what you can substitute for what if your first choice isn’t available.

This chart is extremely useful if you’re cruising in Latin America, giving Spanish translations of common American cuts of beef.

However, it’s important to realize that Spanish “names” for something can—and do—vary from country to country or even from one area of a country to another.  It’s sort of like differences between Texas, Boston and London—yes, we all speak English but it’s certainly not always the same English.  So it’s entirely possible that you’ll run across names that aren’t on the chart, but at least it’s a good starting point.

The second problem is that cuts of beef are not the same from one country to another.  There are some popular US cuts that you’re unlikely to find elsewhere—but you can find local cuts that are similar.  In 6 years of cruising Mexico and Central America, I never found a “pot roast” type cut (that is, one large roast-size piece of chuck)—but I could find plenty of 2″ cubes of chuck that tasted great in my pot roast recipe.

It fairly simple, though:  the cow has all the same parts, no matter what country it’s in.  The difference is only in the way it’s cut up.  So the key is to look at the overall structure of the meat—the bones and marbling—to determine what local cuts are roughly equivalent to the ones you’re looking for.

The first chart above sometimes has better pictures of the actual cut, so I found that I often used the two together when we first began cruising in Mexico.  Within a month or so, I was pretty comfortable with the Mexican cuts and names and didn’t have to refer to the charts nearly so often.

The first page of this 2-page handout tells approximately how long to grill various cuts of beef on either a charcoal or gas grill.

The second page gives buying and grilling tips, such as which cuts are best, how to tell if the fire is hot enough and how to use a meat thermometer to determine if steaks are done.

If you haven’t done a lot of grilling in the past, this is a really good reference.  We found that we grilled more on the boat than we had ashore, particularly in tropical summers when we wanted to keep heat out of the boat — plus, we loved to sit in the cockpit and enjoy our surroundings!

Seven pages of information, all pertaining to grilling the perfect steak.  It starts with basic beef information (grades and aging), describes the various steak cuts, and provides detailed grilling instructions.

343 Shares
Some links above (including all Amazon links) are affiliate links, meaning that I earn from qualifying purchases. Learn more.