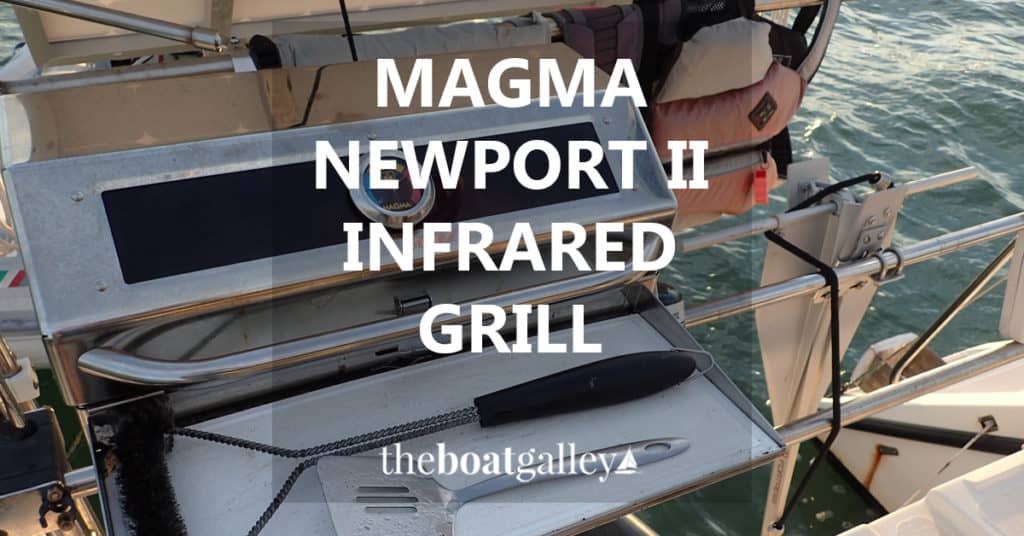 Until this year, I’d never done much grilling (the grilling section of The Boat Galley Cookbook was written by my co-author whose husband grills almost every night). That all changed when I was diagnosed with diabetes last November and switched to a very low-carb way of eating. All of a sudden, all my go-to meals were off limits. No potatoes, rice, pasta, beans. Limited portions of most veggies. Very few “sauces” and virtually no casseroles or skillet meals.

Grilling is a great way to prepare the foods that I now eat quickly, easily and with lots of flavor. I started experimenting with grilling aboard and quickly discovered that (a) I loved grilling and (b) I hated our grill.

I knew that I wanted a gas grill — while I love the flavor that charcoal imparts, we just don’t have space to carry much or store it in a dry spot. So that eliminated some great choices, such as the Cobb Cooker.

After researching, I bought a Magma Newport II Infrared grill. Boat grills in general are not cheap, and this was not the least expensive. It was a big decision, particularly as I’d never grilled that much before — would I really grill enough to make it worth spending that kind of money?

Six weeks in, I think I made a great choice. I love my Newport 2 Infrared and cook at least 5 nights a week on it.

I’ll admit, I had a bit of a learning curve with the grill, but I got a wonderful book called How to Grill and quickly was putting great meals on the table. Another add-on that really helped was getting flat metal skewers for kabobs — the bamboo ones I first had tended to burn (I lost half of my first kabob overboard when a burned section broke as it took it off the grill) and meat and veggies would spin so that the heavier side was always down.

My grilling gear (all available on Amazon):

630 Shares
Some links above (including all Amazon links) are affiliate links, meaning that I earn from qualifying purchases. Learn more.