You are here: Home / Boat Work / Why We DIY on the Boat 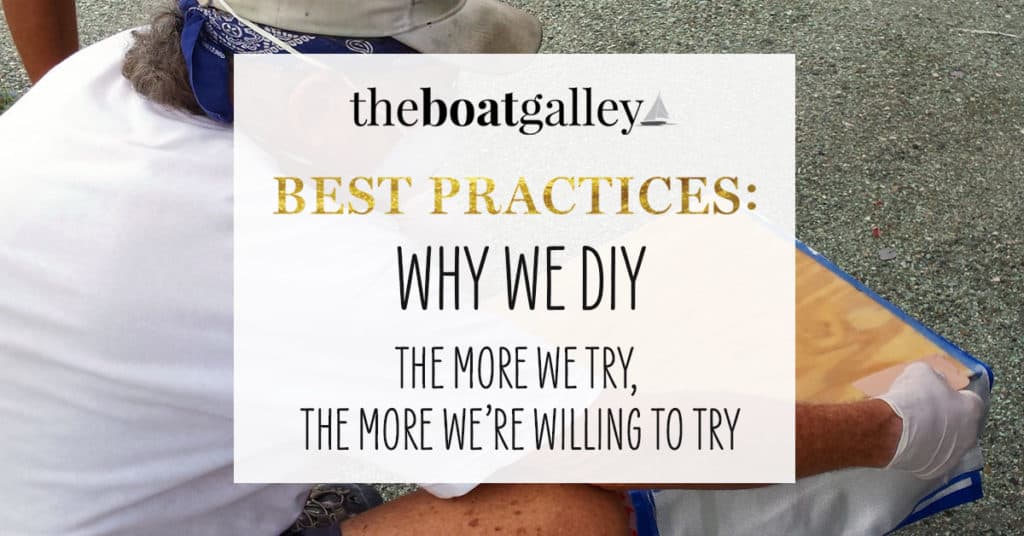 So why do we DIY on the boat?

More than one reader has commented on the fact that we do a lot of our own work on our boat. And – in more polite terms, of course – we get asked a couple of questions quite frequently:

While there may be some element of cost-consciousness in doing our own work, that’s really not it.

We do get a certain satisfaction in being self-sufficient, but we’d much rather spend our time exploring new places, sailing and socializing. But when something breaks or we decide needs to be changed/upgraded, the work has to be done somewhere by someone. Professionals might be faster; often they’re not due to full schedules. By doing it ourselves, we can — to some extent — determine the timing and location.

I’ll start by saying that Dave and I are both reasonably mechanical but we were never big on home improvement ashore. Neither of us came to cruising with any special set of skills or background that would be particularly helpful in boat work. So it’s not like any of this is stuff we’ve been doing all our lives.

When we bought our first cruising boat we hired out most of what we needed done. And we had mixed results – some was very good and some not so good. Sometimes something wouldn’t really be fixed and sometimes it was made worse.

When We Work on the Boat, We Care

When we pay a professional to do a job, we think that it’s going to be done right. Better than we could do it. Faster. And sometimes, yes, that’s true. But many times it’s not. Even though a particular job may have been something we knew nothing about when we started, we were virtually always successful.

I think a large part of that was because we cared. We weren’t just picking up a paycheck for our work, we were going to have to live with how the job was done. So we’d research. Watch YouTube. Do something and re-do it if the results weren’t satisfactory. We were far more tenacious.

A case in point, which was actually a turning point in our DIY or not mindset: in 2005, our refrigerator just wasn’t cooling sufficiently. Two repairmen couldn’t find the problem; we finally figured out that it was low voltage from dying batteries on our own.

It was an A-HA moment. We didn’t have to be experts. We had owner’s manuals, books from Nigel Calder and Don Casey, the internet and other cruisers. With their help, we could figure stuff out. Little by little, we began doing more and more of our own work.

The more of our own work that we did, the fewer problems overall that we had. We had a better understanding of the routine maintenance needed and spotted potential problems before they became something big. When problems did arise, we knew what we’d done before and where the likely trouble spots were.

If we discovered a problem while doing one job, we’d go ahead and fix the other thing as well. Most professionals aren’t going to do that: they do the job they were hired for, and that’s it. Yeah, it’s that old project creep and one of the reasons it takes longer to do something yourself. You know, things like when you run a wire for your new fan and find another wire that’s not crimped but just twisted and taped, so you take the time to take it apart and crimp it properly.

We Choose the Parts

Removing old parts and having to decide exactly what new parts to buy has paid off for us, too, versus letting someone else spec out a job. So many times, it’s when we get in there to remove the old whatever that we discover why it failed or wasn’t satisfactory – or another problem with it. And then when we choose the new, we can read product descriptions and reviews to try to find something that will work better – or an improved installation method. (Admittedly, sometimes we still choose a dud.) Ordering parts ourselves, too, we get to choose the quality. And we aren’t limited to an in-house supplier.

This past weekend, we removed our lifelines and were planning to send them out to be redone (numerous rigging shops offer a service where you can send them your old ones and they’ll duplicate them). A friend convinced us to do them ourselves, saying we could borrow his swaging tool.

Although Dave and I had looked at what we had when we removed the lifelines, it wasn’t until I started measuring what we had in order to figure out what I needed to order that I discovered that we had four close but different size fittings – 6mm, 1/4”, 8mm and 5/16”. And only three different sizes on the threaded studs. So some had been jammed and cross-threaded together. Other connections didn’t have any locking mechanism and I discovered one lifeline with no adjusting turnbuckle. Had I not been buying parts, we wouldn’t have known — and the shop probably wouldn’t have noticed the difference since we would only have sent in the ends with the threaded studs.

I had to buy additional parts, but the problems will be corrected: we’ll have one size of connector, none will be jammed on, the cross-threaded ones are headed for recycling, all that are threaded will lock and we’ll be able to adjust the length of all. We also decided to use different hardware in one area to avoid a chafe problem. And I chose to use 316 stainless instead of the “standard” 304 that the rigging shop uses.

We Don’t Do Everything

Admittedly, we don’t do everything ourselves. AC power is one that we do very little with – a mistake could kill us instantly. Other times, we go a semi-DIY route: we’ll hire a “consultant” or someone to work with us. That was the case with our solar panel installation – Alex helped us figure out what we needed and we did 90% of the work on our own. We learned about our system, it cost less and we got it done sooner than if we’d needed to wait for a larger slot in Alex’s schedule (he was at our boat a couple times for an hour each time and had a little shop time vs. the two days he’d have needed if he did everything).

We Can Do More On the Boat than We Thought

The longer we cruise, the more we do ourselves. We’ve come to realize that most of what needs to be done isn’t really that difficult when you break it down. We’re not trying to come up with new ways of doing things. The how-to and troubleshooting guides are all out there. Google is the cruiser’s best friend.

The more we try (and succeed at), the more we’re willing to try. Dave and I find that often it’s the idea of doing something that’s scary when you’ve never done it before. Who? Me? Fill in a thru hull? But actually doing the work isn’t nearly as mind-boggling as we anticipated. Yes, it may be tiring and yes, we may spend some time at various points staring at parts and re-reading the book and then watching YouTube for the seventh time, but suddenly things will click and we’ll get it done. We’ve learned to allow plenty of time for new things and take it step by step. Hey, that thru hull is patched!

NOTE: I don’t want to imply that we’re against hiring professionals. Good ones are wonderful to work with and we seek them out whenever we can. But we also try to learn how to do things on our own. We’ve found that the truly top-notch pros aren’t afraid to teach as they go.

236 Shares
Some links above (including all Amazon links) are affiliate links, meaning that I earn from qualifying purchases. Learn more.