Hurricane readiness. What does that really mean? It’s more than just prepping the boat; it’s more a whole way of thinking.

How many times have we prepped our boat?  We’ve had two direct hits on our previous boat and five other times when the center of named storms came within 50 miles. Plus, of course, we prepped numerous other times for storms that curved away or fizzled. I’m not sure the total count.

Make prepping for a hurricane easier and a little less stressful with my 10-point tip sheet and editable hurricane prep checklists. Download them for free: Hurricane Prep Checklists.

Some thoughts on being ready for a hurricane . . .

Prepare for the worst, hope for the best

It’s easy to look for the forecasts that say everything will be okay . . . or to keep reading forecasts and forecasts, trying to figure out what’s most likely.

Unfortunately, we’ve seen this lead to delayed preparations and insufficient time. One of our friends admits that he had serious damage to his boat simply because he was too engrossed in reading forecasts and sort of “disconnected” what he was reading from what it meant he should be doing.

Once we’re in the cone of “possibly will be affected,” we start executing our hurricane plan based on the worst-plausible-case and soonest-possible-time forecast for our location. Most often, it turns out we have more time and the storm isn’t as bad as the worst-case. But not always.

Preparing for the worst possible forecast is at the heart of hurricane readiness.

If the storm doesn’t hit you or isn’t as bad as forecast, be glad you had the practice. The first storm we ever prepped for (on our previous boat) fizzled. But we learned so very much about hurricane readiness in prepping for it. Several shackles that we needed to remove were seized and took forever to get apart. We discovered that we needed to make a lot more chafe gear. We suddenly had questions about the best way to anchor. How did our bimini come apart? And more.

Three weeks later, when we did get a direct hit by a Category 1 storm, we were prepared for it because of what we’d learned (and found we needed to learn) in the practice storm.

It’s one thing to think through what all you’d do and make a list. It’s another to actually do it and find out what does and doesn’t work as planned. Read more about how our boat survived a direct hit by Category 4 Irma.

Forecasting isn’t an exact science. While it’s true that hurricane forecasting has come a long way in the past twenty – or even ten – years, there is still considerable track and intensity error three days out. Five days out, when you need to start taking action, there’s even more error.

This mindset of starting to prepare even when there is considerable uncertainty about the track is another cornerstone of true hurricane readiness.

One more note on forecasts: don’t get too focused on the exact track. Instead, note how large the whole storm is. This year, we’ve seen tiny storms with less than 50 mile diameters to the monster Invest99/TD9 at over 1,000 miles. Large storms don’t have to hit you directly to cause serious damage either with wind or seas.

Obviously, if you’re in the target area for the storm, you need to prepare. But what about a storm where every model and every forecast changes considerably? The official NHC forecast once a storm is a tropical depression or above may not change significantly due to what they call forecast continuity – in other words, they’re unlikely to change the forecast significantly from one issuance to the next one six hours later unless there is highly compelling evidence to do so.

If you just look at the forecast, then, you can be “fooled” into thinking that the track is fairly certain.

Every time that the NHC puts out a forecast, they also put out a companion document called a discussion. In it, the forecaster discusses their reasoning for the forecast and also say how confident they are in it. Often, they will discuss several possible tracks and describe the forecast as being “low confidence.”

A low confidence forecast puts Dave and I on heightened alert. We watch closely and are likely to position ourselves for a run to our hurricane hole, particularly if some of the possible forecast tracks would impact us. If there is anything we need to do before heading there, we do it. And we err on the “too early” side of going and prepping. Until there is a high confidence forecast that the storm won’t affect us, we assume it will.

It’s tempting to wait – why start prepping if the storm might not hit? But you want to be sure you have your spot in the hurricane hole, marina or boatyard – and storms can speed up. In 2003, Hurricane Marty went from moving at 4 knots when we went to bed – giving us another day to finish prepping – to moving 20 just a few hours later. Just an hour after we woke up the next morning we were in the storm.

An even bigger reason for preparing early is that when forecasts give storm positions and times, they talk about the center of the storm. By that time, you’re halfway through it!

We’ve learned that we have to know how big the storm is and figure out when the leading edge will get to us (often shown on forecasts as 35-knot winds – gale force) and plan to be ready before then even if the storm speeds up.

The big lesson for us in the first hurricane we faced was that once the wind gets to gale force, you can’t do anything more. Sails are almost impossible to get off if it’s blowing more than 25 (and hard to control at 15+). At 35, even getting into the dinghy to head to shelter ashore is dangerous.

It Takes a Village

The chances of your boat coming through the storm unscathed are directly related to every other boat in your anchorage, marina or mooring field coming through unscathed. Once one boat starts to drag, break a line or have a genoa come unfurled, the greater the chance that it will hit another or pull a dock apart. And that just causes a chain reaction.

Once your boat is prepped, help your neighbors prep theirs. In particular, make sure that they get roller furling headsails off – many people haven’t done this before and might be a little intimidated. A helping hand to assist can mean that they get it done!

An example from Hurricane Marty in LaPaz, Mexico (see photo below). This all started with a couple of genoas that unrolled, those boat pulled one dock apart, and it just cascaded from there. In the end, almost every boat in the marina had serious damage, as did the marina itself.

Check any unattended boats to see if they’re fully ready. If possible, add lines and chafe gear if what they have out is not adequate.

“The more I sweat, the luckier I get.”

I repeat this quote to myself as I’m hot and exhausted prepping the boat. Hurricanes hit during the hottest months of the year and hurricane holes, by definition, block most of the wind. Prepping is hard, physical work.

We’ve learned to make sure we get plenty to drink, eat real meals, take breaks, jump in the water or cool shower to cool off and so on. You have to take care of yourself in order to take care of the boat.

There may be a certain element of luck in surviving a hurricane threat, but it really does seem that the better you prepare for it, the better the outcome. And while friends may say we were lucky to have no damage despite a direct hit by Hurricane Marty in 2003, I’ll also credit our buckets of sweat as we prepared.

That’s our boat on the right during Hurricane Marty: 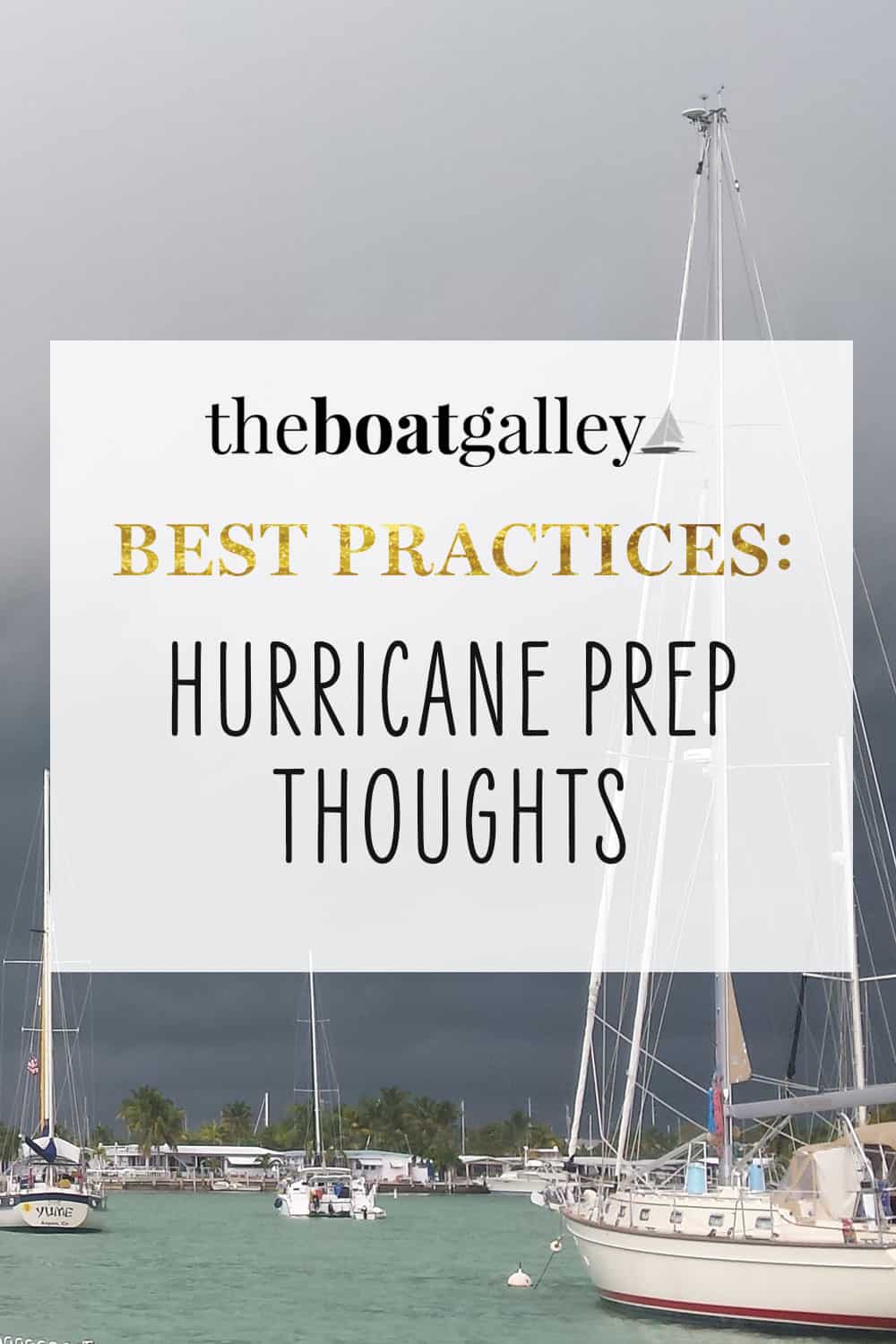 Get an editable hurricane prep checklist and tips for preparing FREE:

305 Shares
Some links above (including all Amazon links) are affiliate links, meaning that I earn from qualifying purchases. Learn more.

Figuring out which cell plan to go with took some trial and error. I wish I’d thought about some of these things up front. [More] Challenges With Cheap Cell Plans 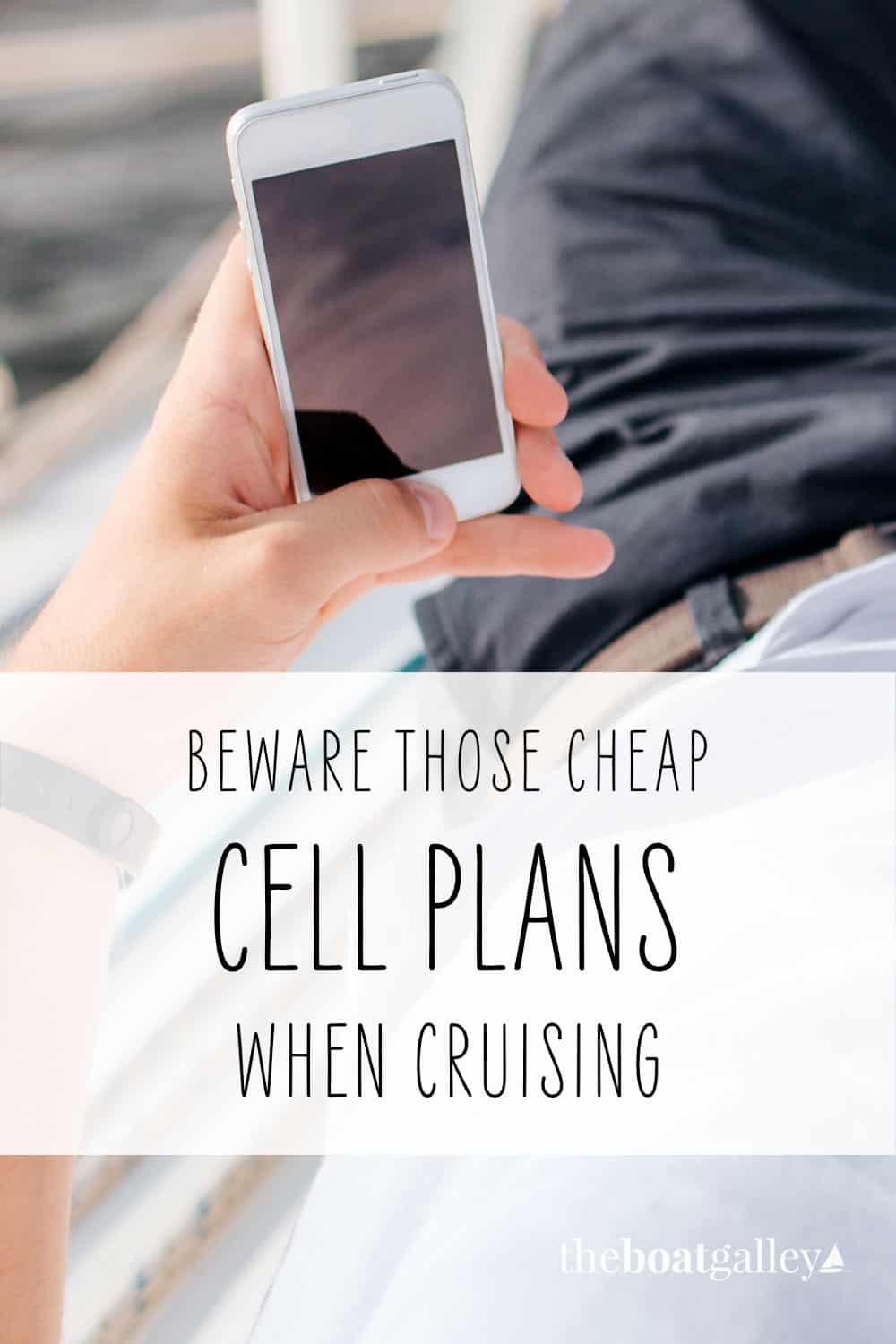 Looking for a simple, affordable, and comfortable cruising boat? An overview and comparison of 10 of the most popular small catamarans. [More] 10 Small Catamarans for Cruisers