You are here: Home / Worries & Concerns / Hurricane Prep: Why Remove Jibs and Genoas 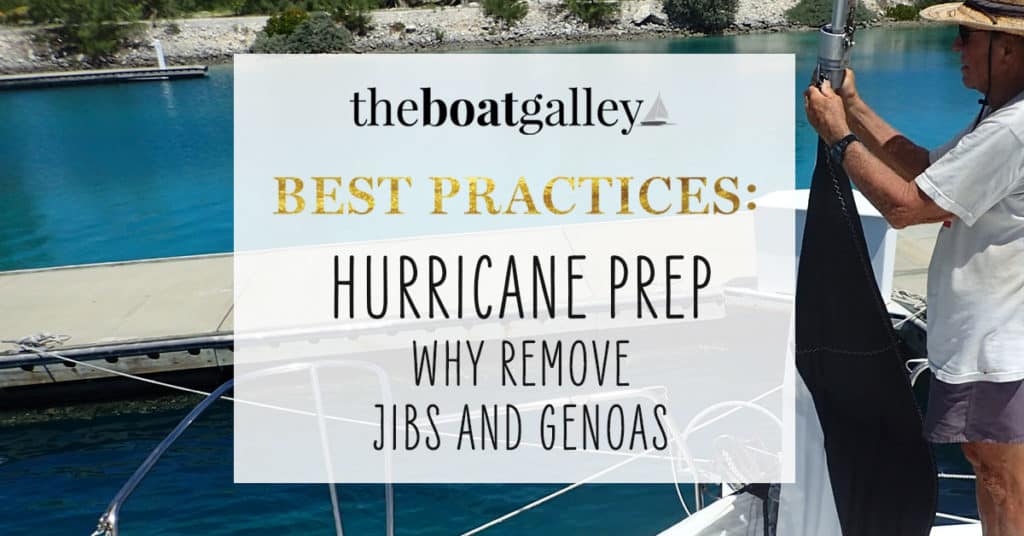 Whenever a hurricane threatens, I post about the need to remove roller furling jobs and genoas. And every time, someone will reply that just tying them off or wrapping with line is sufficient.

It’s not, and the issue isn’t simply possibly ruining your sail.

In 2003, Hurricane Marty raked the Sea of Cortez, where we were cruising. Boaters in the city of La Paz were particularly hard-hit as one marina was literally torn apart in the Category 2 storm (the smaller marina next door also suffered serious damage). Before and after pictures of Marina de La Paz:

Docks were simply ripped apart in the storm. I’ve seen video taken during the storm and talked to people who were there.

Many boats had been left with roller furling genoas still up — generally tied off in some fashion. The video (which I saw but don’t have — wish I could post it) shows the wind slowing tugging a bit of one of the genoas out of the lines wrapped around it — it started with just a couple inches — and then bit by bit, more pulled out and filling with wind until there was a pouch a couple of feet long. That boat exerted more and more force on the dock and cleats, and finally broke free (it’s not clear from the video if it simply pulled away or actually broke part of the dock).

That boat then crashed into others, which were also having their genoas start to unwrap and fill with air. Bit by bit, more boats broke free or pulled docks apart as the storm raged on. The exact sequence of events is unknown as white-out conditions arrived long before the storm peaked, and cruisers also had to take shelter where there were no windows.

Photos taken afterward show almost all the jibs and genoas hanging in tatters. In some cases, you can see lines wrapped around the sail above and below the portion that was pulled out. In other cases, lines simply chafed through and only remnants were found.

I’m certainly not going to say that there would have been no damage if all boats had been completely stripped before the storm. There might have been.

But I — and everyone that I know who was on scene — am convinced that the roller furling jibs and genoas being left on significantly increased the damage as they multiplied the force that the boats exerted on the docks . . . and also caused harder collisions when boats that had broken free crashed into neighbors.

I will say that having had one direct hit by a hurricane and being within 50 miles of the eye on four other occasions, trouble tends to multiply. Once one boat gets in trouble, it’s likely to hit another or snag its anchor. I refer to it as “it takes a village” — whether you are in a marina, anchorage or in the mangroves, you’ll fare best if you help your neighbors after you’ve prepped your boat. Making sure that they are secure and have removed their sails isn’t just helping them, it’s helping yourself.

When a sudden squall pops up, wrapping your roller furling sail and tying it off is usually the best thing you can do. But a hurricane is different. It is likely to be stronger than any squall you’ve been in. It is likely to last far longer than any squall — even if it hits you as a tropical storm and not a full-on hurricane. And you have far more warning than with a squall, so you can prepare better. What works with a squall simply isn’t sufficient for a hurricane.

And if I haven’t convinced you yet of the need to remove the sails, there’s always this reason: Most insurance companies will deny claims if you left sails on, particularly roller furling ones.

550 Shares
Some links in this article (including all Amazon links) are affiliate links, meaning that we earn from qualifying purchases.