You are here: Home / Living on a Boat / Boat Ventilation 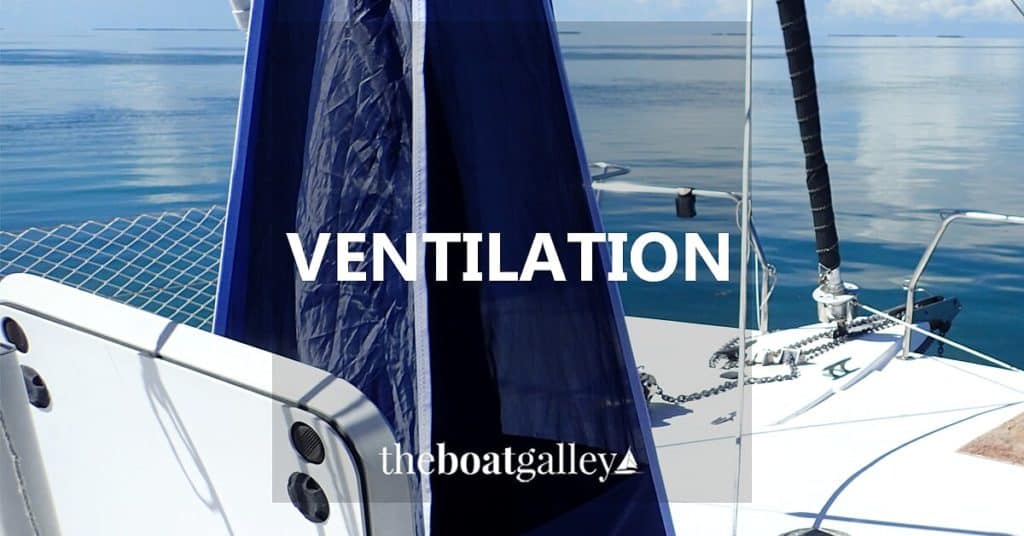 How do you cope with summer heat?

While heat in the boat isn’t strictly a galley issue, cooking is the one thing that puts the most heat into the boat. Different cruisers cope in different ways:

We opted for a fourth choice:  improving our boat’s ventilation so that the cooking heat didn’t stay in the boat. We wanted to be out in the islands, not at a marina or in the US—the summer is gorgeous in the Sea of Cortez and the water is clearest for snorkeling when the temperatures are the hottest. And while we used the grill somewhat, and I tended to cook on the stove instead of in the oven (although I still baked bread frequently), we didn’t want to totally change our lifestyle.

With a little work and a few hundred dollars in supplies (less than the cost of one month in a slip or airfare back to the US), we dramatically improved the ventilation on the boat without significantly increasing the electrical load. Summers were enjoyable.  And when other cruisers came aboard Que Tal, most remarked about how much cooler our boat was than theirs.

Here are our five keys to improving our boat’s ventilation:

Remove the screens when there are no bugs.

In the Sea of Cortez, there were rarely bugs to the point where we felt the need for screens. And when the breeze is light, screens block a lot of air movement. When there aren’t a lot of bugs around, try taking your screens out and see how much more air comes in the boat. If needed, replace the screens near sunset or whenever bugs come out where you are. Along the same lines, don’t use no-see-um screens if regular ones will do:  no-see-um screens almost totally block any wind.

Open up the cockpit as much as possible.

Screens or side-curtain sunshades enclosing the cockpit also restrict air movement—both in the cockpit and for air to move up and out through the companionway. When we had our dodger and bimini redesigned, Danny from Pacific Thread in La Paz suggested that we make the “windshield” removable—another huge improvement to air flow. Admittedly, if bugs are a big problem where you’re cruising, removing cockpit screens might not be practical, or you might have to put them back in place for part of the day.

And now three more suggestions for improved ventilation, all of which don’t qualify as “cheap”—but all of which we felt all were well worth the money:

We’d only turn on the one(s) where we actually were at any time, and since our preferred Caframo fans only drew 0.6 amps, they were not a significant drain on our batteries. The two in the saloon were not permanently mounted, so we also could move them to the cockpit when needed (see photo at the top of this article!).

The previous owner had installed some of the fans and we added more.  We found that we greatly preferred the Caframo 12-volt 2-speed fans to the Hella fans—they moved far more air per amp.

I’ve written a separate article on 12-volt fans, and why we liked these better than other models. However, if you want to go straight to our preferred fans, here’s the link to them:

A wind scoop—or two, depending on your boat’s configuration—brings even the slightest breeze into your boat.  I’ve now written an entire article on wind scoops—please read this update with comments on the best designs and a good place to get them.

Exhaust fan in the galley

We removed a passive ventilation dorade box and and installed an exhaust fan in its place. The first fan we got was a 3″ diameter model, as it fit exactly in the hole. When it died, we replaced it with a 4″ fan which moved considerably more air.

As every boat is different in its configuration, it’s hard for me to make specific recommendations. However, a few considerations include:

One friend went so far as to purchase a small hatch and install it over the galley area.  As it was right at the highest point of the galley and directly over the stove, he didn’t feel that he needed an exhaust fan— the heat just naturally flowed up and out.

No two ways about it, summer in the tropics can be hot. Dave and I, coming from the Midwest, were somewhat more acclimated to it than cruisers coming from the much cooler Pacific coast.

Still, the key for us was planning and preparing in the cooler season for the summer. Having fans and a good wind scoop ready to go can dramatically improve the conditions on your boat and particularly in the galley. And in many places, such as for us in the Sea of Cortez, summer was a wonderful time to be cruising, with the clearest water for snorkeling and generally very calm seas. I would have hated to miss it!