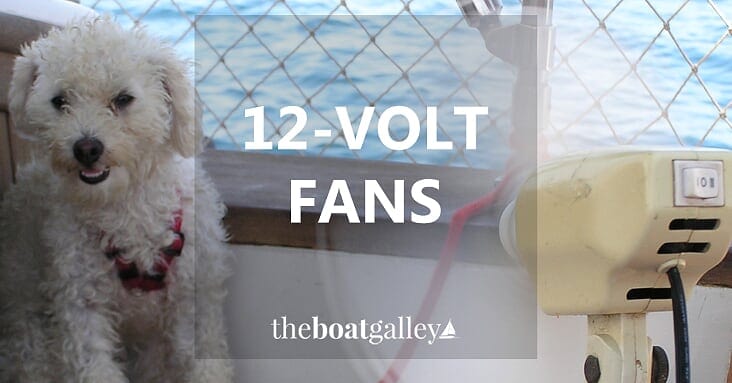 When you think of outfitting the galley, you’re more likely to think of pans than fans.  But in hot weather, the fan will be one of your most treasured pieces of equipment.

You’ll probably want a few more for other areas of the boat, too—we had a total of 8 on board.  Well, I should say that we had 8 out in use, plus a couple more as spares.  Admittedly, we were in a hot climate—often 95+ with occasional days over 100—as we cruised the Sea of Cortez in the summer.  We put 12-volt fans in the following locations:

The previous owner had put a couple of Hella fans on board, and we added Caframos.  We immediately noticed a HUGE difference in the amount of airflow per amp, which is what I want to pass on here.

The Caframo fan pictured above puts out more air per amp used than any other fan.  I know that some other fans may spec out that they move more air, but there is a basic design difference that results in more “useful” air flow with this particular model.

The major difference is immediately apparent:  there’s no blade guard.  With no cage, all the air is directed on you.  Don’t worry about safety—the blades are finger-safe, even for children.  And yes, I’ve put a hand into one, more than once.  It doesn’t hurt any more than knocking on a door hurts—yes, you notice it, but the blade is soft and stops immediately.

An added bonus is that the fan is much easier to keep clean without a cage!

Manufacturer’s specs say that the fans draw 0.59 amps on high speed.  We almost never ran them on high, and they drew about 0.3 amps per our Link 2000.

The fan comes with a suction cup base, and also a screw-in base.  You can also buy an add-on clip base.  The suction cups just never worked for us and I don’t know of anyone who used them.  Where we wanted the fans permanently mounted (most of them), we used the included screw-in bases (you can still change the angle of the fan, so it’s not a totally fixed position).

Where we wanted to be able to easily move the fans—that would be the two in the saloon area, that we also used at the nav station and in the cockpit—we purchased the clip bases and used them.  They’re a bit of a pain to install the first time (holding down a spring and putting a nut on), but not as difficult as many chores on a boat.

The fans come with a 6-foot cord and cigarette-lighter style plug.  Where we permanently mounted the fans, we just cut the plug off and hard-wired the fans.  They have a High-Low-Off rocker switch on them, so hard wiring does not mean that they are on all the time.

On the clip-mounted movable fans, we used the cigarette lighter plugs and they worked well (if a fan suddenly fails, check the fuse in the plug before assuming the fan is shot).

As the fans age, you may notice some vibration and noise.  We found it was due to the blade becoming loose or very slightly out of balance.  Replacement blades are available for about $6 and it’s a 30-second job (no tools) to replace one.  We always kept a few in stock, both for age-related repairs and in case one of us (or something large) fell against a fan and broke the blade.

Out of all the fans we had, the two Caframo fans that we used the most died after about 5 years.  The others were still going strong when we sold Que Tal.  We replaced a few blades over the course of 6 years—I don’t remember exactly how many, but it did not seem excessive for the use they got.

Caframo says that the fans “create minimal electronic interference” and I’d agree with that—the only interference we noticed was with the SSB/ham radio, and it seemed like everything with a motor (the refrigerator, all fans etc.) interfered with it.  We just learned to turn the fans off when we were listening to the net or sending e-mail.  The fans did not interfere with the VHF, radar, autopilot or anything else.

NOTE that Caframo now makes a number of different styles of fans, some of which state they draw less than the fan I recommend (as is also the case with the Hella fans, for that matter).  However, they all have a cage over the fan blades instead of the soft, safe blades.  That cage makes a significant difference in the airflow that actually reaches you—and that’s what I really care about!

Further, I’ve talked to many people who have had a lot of problems with these other (more expensive) models. I don’t recommend them, but I do recommend (and own!) the two-bladed ones that I talk about here.

Sources for the ones that I recommend are the following:

572 Shares
Some links above (including all Amazon links) are affiliate links, meaning that I earn from qualifying purchases. Learn more.