You are here: Home / Boat Work / Adding or Changing Refrigeration: Things to Think About

If you’re installing refrigeration for the first time, or doing a major upgrade on your existing system, you may be overwhelmed by the decisions you’re having to make simultaneously.  Perhaps a few thoughts here will provide a framework.

Like many things in cruising, from your choice of boat to the route you take, there are no universal answers in choosing a refrigeration system.  But understanding how one decision will impact others can narrow down the range of appropriate choices for your situation.

Adding or upgrading refrigeration on a boat isn’t like going out to an appliance store, buying the one you like and having it delivered.  On a boat, you need to consider:

They all have to work together to make having refrigeration pleasant, as opposed to a frustration.

(UPDATE:  Since I originally wrote this article, several readers have written me about Engel refrigerator-freezers as being a great option — see the full article on them here.)

For most cruisers, the first questions with regards to refrigeration are “how much power will it use?” and “how can I provide the power?”

Your other choices will determine how much power the refrigerator uses, as will even your choice of how you power it.  If your refrigerator is next to the engine compartment, as is typical on many boats (a serious design flaw), running the engine to provide power – whether via alternator to the batteries or directly for an engine-driven system – actually will heat up the box and cause you to need even more power to cool it down.  The same is true if the refrigerator is next to a generator compartment.

Relatively few boats opt for engine-driven refrigeration any more.  With an engine-driven system, you run the engine a couple of times a day, generally for 30 to 60 minutes at a time, to cool down large chill plates that then keep the box cool until the next run time.  There are several disadvantages to this system:

While some large boats opt for 110-volt systems using generators and inverters, and I’ve known a couple of trawlers that used RV propane systems, by far the majority of family cruisers opt for 12-volt systems.  A 12-volt system operates off the main battery bank, and power for it can be generated any way you’d otherwise charge the batteries:  solar, wind, towing generator, alternator, shore power or generator.  Most boats use a combination, and virtually all have to increase their power generation capabilities when they install refrigeration if they haven’t had it before.

Two things to consider with a 12-volt system:

Want more help for setting up your galley, buying and storing food, and cooking aboard? Sign up for Cooking for Adventures, a FREE mini-course.

It’s worth taking a bit of time to think about where you can – and where you should – place the compressor.  Yes, you have to find a spot where there is room and that may seriously limit the choices.  But don’t just opt for the first place you find.

In simple terms, most compressors work by transporting heat from the refrigerant to the air around it.   It will operate much more efficiently if there is good air flow around it – and if it is kept as cool as possible and if the air that reaches it is as cool as possible.

Therefore, putting the compressor in the engine compartment is not good.  Nor is putting it in any enclosed location with only small louvers for air circulation.  NOTE:  A few systems use a keel cooler that transfers heat to the water instead of air cooling — with these there is little choice in placement.

You also have to consider distance from refrigerator box, as the refrigerant has to make a full loop from the compressor to the evaporator in the box and back.  Bends in the tubing and also a long distance make for more resistance to circulation of the refrigerant and hence a less efficient system.  Be sure to check the specs before buying a compressor to be sure that it will work in your planned location.

And another important consideration is access for maintenance, recharging the system and other repairs.  Okay, so access is never good on a boat.  But at least don’t put it where you have to stand on your head or dismount the compressor to check a trouble light or recharge the system.

Contrary to home refrigerators, the “box” for most boat refrigerators is custom made.  Consequently, if you’re building a new box, you’ve got virtually unlimited options.

Top-loading or front-loading? If you’re used to a “shore” refrigerator, front loading just seems so much more natural.  And yes, it’s usually easier to see what’s there.  But front loaders have a nasty tendency to have food fall out if the boat moves while the door is open.  And you need to install clear plastic strips to keep as much cold air in the refrigerator as possible when the door is open.  And the opening needs to be either fore or aft facing in a sailboat – otherwise everything will fall out on one tack or the other.

After taking a bit of time to get used to it, I actually preferred my top loader.  With a bunch of bins to keep things organized, I could find things quickly.  And they stayed in place, no matter what tack we were on or how rough the seas.  I was even able to open the refrigerator and make sandwiches while we were riding out a hurricane at anchor and rolling gunwale to gunwale.

A very deep refrigerator can pose problems.  One of the top gripes for many women is “standing on my head to get things out of the frig bottom.”  (From Mary, on Facebook.)

And let’s face it, you want a refrigerator that’s large enough to hold what you want it to.  And that’s a personal “feeling” — you may want enough meat, drinks and veggies for a month at a time, or just food for a weekend.  Read my related article on Reducing What You Store in the Refrigerator, though, before making a decision on how much space you need.

Insulation. In general, the thicker and higher the R-value, the better.  Materials are constantly evolving, so I won’t make specific recommendations.  Of course, if you have a limited space, the thickness of insulation is a tradeoff with space inside the refrigerator.

General design. A lid that latches down (instead of just being held by gravity or a magnetic strip) with a thick gasket is best – far less cold air will seep out.  The lid won’t fly across the boat in a knockdown, either!

An outside surface (surround) that reflects heat will also do wonders to help your refrigerator run more efficiently.  Que Tal had a teak surround that frequently got warm to the touch in summer – you know that’s not good.

If you decide to put a drain in the bottom for when you defrost, it needs to have a trap in it – and the trap needs to be within the insulated area.  An alternative is to be able to securely close the drain.  Otherwise, hot air from the bilge (well, maybe not hot, but hotter than what’s in the refrigerator) will rise into the refrigerator and you’ll constantly be having to cool it.

Freezer. There are all sorts of design possibilities for having either a separate freezer or a freezer compartment within the refrigerator.  The size of the freezer determines how much meat you can carry, as well as how many meals you can prepare ahead for a passage.  But it takes a lot of energy to freeze foods in the first place, although not a lot to keep a full freezer frozen.

My freezer was about ½ cubic foot, and I found it adequate (I boned all meat before freezing so as not to waste space on non-edible items), but I would have loved a larger one.  If you want to have ice, remember to allow room for trays (be sure to get the vertical ones) in addition to food.  Note that very few boat freezers are cold enough to keep ice cream.

The longer we cruised, the more adamant we became about buying brands – and models within brands – that lots of other cruisers were using or that were composed of generic parts.  Regardless of whether it was refrigeration or another system, we found over and over again that having something that other people – both helpful cruisers and local repairmen – knew of and could get parts for was worth not necessarily having the “latest and greatest.”

Good repair manuals that you can actually get, off the shelf parts, and universal fittings are crucial once you’re away from the original installer.  I also like companies that will respond to technical support questions by e-mail (you don’t want to deal with support issues by sat phone).  The time to think about these issues is before you plunk your money down.

As you work through these questions, you’ll almost certainly have to make some compromises to end up with a system that works for you.  The trick is to realize the tradeoffs as you’re making them, and not after the fact when things aren’t working the way you envisioned.  For example, a tiny box with thick insulation won’t use much power – but will it give you the food and drinks you want?

A refrigerator is an expensive piece of galley equipment – even more so if you have to add extra batteries and upgrade your power generation.  As brands and models are always changing, and we only have experience with the Adler-Barbour system that a previous owner chose (and which worked well), I don’t want to recommend specific systems.  But as you talk to sales reps, realize that there are numerous components to the refrigeration system, and choices in each affect the others . . . and your ultimate satisfaction! 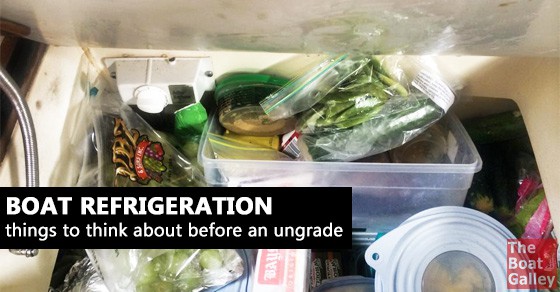 113 Shares
Some links above (including all Amazon links) are affiliate links, meaning that I earn from qualifying purchases. Learn more.