You are here: Home / Buying a Boat & Gear / Choosing Our New Refrigerator 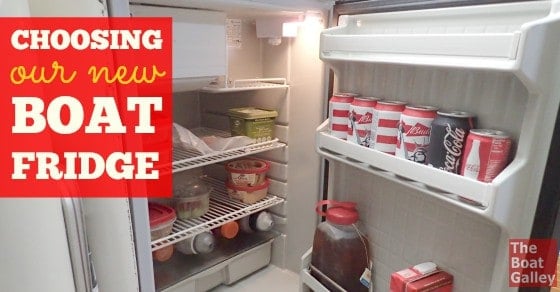 One of our projects this summer was to replace the refrigerator on our boat, and I’ve gotten a whole bunch of questions in response to my Facebook and Instagram pictures about why we chose what we did and why we didn’t go with some other options.

Barefoot Gal was originally built with a Dometic propane/AC front-opening refrigerator, and she still had the original one when we bought her 16 years later.

Whenever we had AC power (shore power), we could run it off that. Otherwise, it ran on propane. These units were originally built primarily for RVs and were considered state of the art in the late 1990’s, before solar power became so abundant and cheap.

Our unit was badly rusted out and would barely keep food cool — not cold. The freezer did still freeze, however. But as it got warmer this past spring, it was obvious that we needed to replace the refrigerator — while we could, conceivably, replace parts, it was so rusted out that any repair would be temporary.

One option was to replace it with the current Dometic model of propane/AC (2-way) or propane/AC/DC (3-way). On the surface, this seemed like the easiest solution, but we’d have to run a DC wire for either one, as even the 2-way units now used DC power for an electronic controller. Additonally:

To be honest, we’d pretty well decided that we wanted a unit that would run on DC even before I began my research, but we’d tended to think that we’d go with a 3-way unit so that we could run it off propane or AC if the need ever arose. It was only when I learned that the electrical source was simply powering a heater and I saw the power consumption numbers (15 amps DC around the clock, not cycling = 360 amp-hours a day) that I realized this was not for us.

So now we were looking at DC units. Several people have asked why we went with straight DC and not AC/DC, the idea being that we could run the refrigerator off AC when at the dock or in a boat yard. But the reality is that if we have access to shore power, it will be connected to our battery charger (we have a 75-amp shore charger) and we’ll have no problems powering the refrigerator off the batteries. Further, DC-only costs about $130 less — why pay for a feature we didn’t need?

We were hoping to find a refrigerator that would be efficient and fit into the spot already designed for the fridge. This meant another front-opening unit (Barefoot Gal is a catamaran; top-loading refrigerators are more common in monohulls). Neither Dave nor I are finish carpenters and having to do any substantial remodeling to the refrigerator area would add considerably to the cost of the project as we’d have to hire it done.

When we had cruised aboard Que Tal, almost all refrigerators were custom built and required either professional installtion or substantial DIY skills to build the box, insulate it and install the mechanicals. Now, drop-in units are the norm, whether they are top- or front-loading, and DIY installation is much simpler. While we never would have dreamed of building a refrigerator from scratch, we felt confident that we could install a drop-in unit that only requires you to run wires and secure the refrigerator to the boat.

When I first began looking at 12-volt refrigerators, I got a really nice surprise: I could get about 50% more interior volume than with a propane fridge with the same exterior dimensions. Going from 3 cubic feet to 4.5 would be a huge improvement! Admittedly, it’s still a small refrigerator, but not nearly as small!

After looking at unit sizes, amp draw and how generally satisfied other cruisers were with various brands and models, we ended up with with an Isotherm Cruise 130 Classic. General comments about it:

UPDATE SEPTEMBER 2016: After a year of using the refrigerator, I’d give it a B grade. It is energy efficient and offers a lot of usable space. Installation was easy. It just works without a hiccup. Food and drinks are cold. That’s all the good stuff — it is way, way better than our previous propane refrigerator.

The bad is that the door latch is on the flimsy side and we’ve had to bend it slightly a couple of times so that the door actually latched shut. The seal isn’t very tight and frost builds up quickly (I defrost about every 10 days in the heat and humidity of summer). And the biggest problem has been that the freezer door hinges have broken twice . . . I got a warranty replacement the first time; the second time I realized that it is simply a poor design that is going to break with even the tiniest bit of ice buildup (it broke two days after I had defrosted!) and so I’m working on my own re-engineered version that hopefully won’t break.

Bottom line: It’s been a huge improvement and was the best choice available, but no, like most things, it’s not perfect. Read an update on this post.

787 Shares
Some links above (including all Amazon links) are affiliate links, meaning that I earn from qualifying purchases. Learn more.