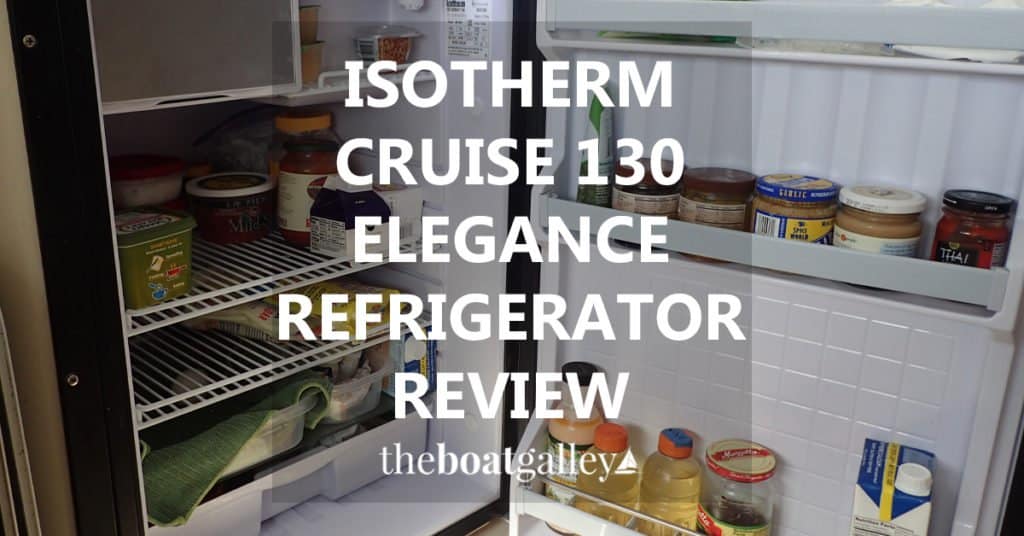 We didn’t regret our decision to switch to a 12-volt refrigerator. The Isotherm Classic 130 was much, much better than the Dometic. For one thing, it had 50% more interior volume while fitting into the same space on the boat. But it wasn’t perfect. After two years of use, I gave it a grade of B in my review.

The trouble spots were that the freezer was small, the freezer hinge prone to breaking, the door seals poor and the door latch flimsy. The door also did not align well with the refrigerator opening. The door seal and door latch problems meant that frost quickly built up and I had to defrost the refrigerator every 10 days to two weeks. The freezer door hinge broke twice and I finally resorted to MacGyvering a new hinge out of duct tape.

When I published my review, Dave Lerbs, the manager of US Isotherm, contacted me about the problems and asked if I’d be interested in swapping out the Cruise 130 Classic for a Cruise 130 Elegance — a new model with improved seals, door latch and freezer door. I was anxious to compare the two. For a variety of reasons (including the little matter of Hurricane Irma), we didn’t get the exchange done until July of 2018. I wanted to use the refrigerator for at least six months — both in summer and winter — before writing my review.

The Isotherm 130 Elegance is the exact same size as the 130 Classic, both inside and out. Interior volume is 130 or 4.5 feet. The freezer is the same size (six liters or 1-1/2 gallons) on both. They use the same compressor and the wiring is the same (wiring is just one positive and one negative to connect).

Both the Isotherm 130 Elegance and the 130 Classic are drop-in refrigerators. Both are very easy to install by boat project standards. And while a little bulky, we were able to get both in and out of the dinghy with just the two of us. Yes, we did the swap without being at a dock!

At the Indel Webasto distribution facility, we met with Fabio (oops, didn’t get his last name!) who showed us the differences from the Cruise 130 Classic to the Elegance.

See all the technical details on the Isotherm Cruise 130 Elegance and 130 Classic models, straight from Indel Webasto, the US distributor.

I’ve now used the Isotherm Cruise 130 Elegance for 6 months. We initially were using it in the Florida Keys tropical summer temperatures; now it’s the cooler winter. It’s a definite improvement over the Classic.

The door latch and seals are so much better it’s just not even funny. And the door aligns properly with the refrigerator opening. This all means that there is a lot less hot humid air going into the refrigerator and less cold air is lost. I’m sure that the better door insulation helps, too. Front opening fridges are definitely less efficient in this regard than top-opening, but not losing cold and gaining heat while the door is closed is huge.

The refrigerator runs less and stays cooler inside. I keep my refrigerator thermometer in the same place as I used to with the Classic. With the Classic, the temperature typically was 46⁰ F. even though I had it set on the coldest setting (7). With the Elegance, it’s almost always under 40⁰ F. and I’m able to keep it set at 6. It runs noticeably less, too.

The power draw is about the same when the refrigerator is running according to the product specs. I would have thought the Elegance used somewhat less based on what we see on our battery monitor.

On average, I’d say we are using at least 10 amp-hours a day less with the Elegance vs. the Classic. It is hard to know exactly as every day is different with how many times we get into the refrigerator, how much warm food we put in, and whether we put anything warm into the freezer. Because we live primarily on solar power, day-to-day differences are hard to track as the solar charging is also different each day.

I defrost anytime the frost and ice build up gets to be 1/4″ inch thick (read my tips for making this as easy as possible). Instead of defrosting every 10 to 14 days as I was with the Classic, I can go about three weeks with the Elegance in the summer and almost four weeks now that it’s cooler and less humid out. Three benefits:

The Cruise 130 Elegance also chills down more quickly after defrosting. Between all these efficiencies (running less, having less frost build up, defrosting less and cooling better after defrosting), we use noticeably less electricity.

The interior of the Cruise 130 Elegance works well, with adjustable shelves and nice door storage. I love having a produce drawer in the bottom and a light inside. Neither my top-loading fridge on our previous boat or the original propane refrigerator on this boat had a light and it’s one of those little things that is nice.

Both models have the same 6-liter freezer, which is on the tiny side if you’re heading to more remote places. Overall, I like the Elegance’s interior but there frankly isn’t enough difference between it and the Classic to make it a reason for choosing one over the other.

The Isotherm Cruise 130 Elegance is a much better refrigerator than the Cruise 130 Classic in my experience. It costs about 30% more, but my feeling is that if you’re going to buy one it’s worth the extra money for far better performance.

312 Shares
Some links above (including all Amazon links) are affiliate links, meaning that I earn from qualifying purchases. Learn more.