You are here: Home / Food & Cooking / How’s the Refrigerator Doing? 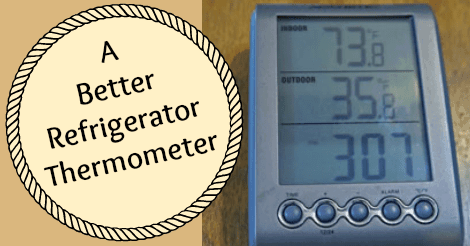 Before writing about it here, I did some testing with the wireless one to make sure it’d work in the refrigerator.  Yep, it’s perfect!  Mine even works in a typical home refrigerator where the signal has to pass through the metal “box.”

A couple of notes and then links to thermometers I like.  First, it seems that humidity sensors often give incorrect readings unless you buy very high end units.  Since this typically adds $10 or more to the cost, why bother? The ones with barometers also tend to get poor marks unless you buy an expensive one.

Second, if you use lithium batteries in both the base unit and the remote sensor, you should get at least a year before having to change batteries.  I’ve only changed the batteries once in using mine over four years.

The “indoor” temp on the display means the temp right where the base unit is.  If you mount it in direct sunlight, you can get some amazing readings if you’re in a hot climate.  Ours was on teak (which soaked up heat) in the companionway (full sun) and I once saw it hit 128° F.!  “Outdoor” refers to wherever you put the remote unit.

Some indoor/outdoor thermometers have an “ice alert” that flashes or beeps.  The ones that flash (using an LED) aren’t bad, but you really don’t want one that beeps if you’re going to use it in the refrigerator or freezer, as the ice alert will start sounding at about 38° F — in other words, constantly if the refrigerator is working properly.  Not only it is annoying but it eats through batteries!

Command Strips work really well to mount both the base unit and remote sensor (don’t put it where it could end up sitting in water or where you’re likely to knock it loose).  If you’re not familiar with these, read my article on them — I love them for securely mounting all sorts of things without making holes!

Of course, the unit that I have is now “out of stock” — since it may become available again, you can view it here (Amazon US only).  Should you get this one, be sure to read the review I left on Amazon to learn a few things about how it works that aren’t mentioned in the user’s guide.

So my alternate recommendations are (basic links are to Amazon US, Amazon Canada/UK shown where available) —

In addition to Amazon, you can buy similar units at many big box stores, including Walmart, and at Radio Shack.  But be sure to check recent online reviews (discount any over a year old if newer ones show a different level of satisfaction).

Mount the base unit where you’ll see it easily — for us, it was right above the battery monitor, which we also checked several times a day.  And then note what the typical temperature is (see my article, Making Your Mark) so that you’ll see not only big problems but also slow, creeping ones.

Keeping an eye on the temperature means that you may catch and solve a problem before you lose a refrigerator full of food.  As Jim and Barbara related, “In 2006 while out cruising, we noticed a rising temperature and were able to replace the blown fuse before any thawing occurred.”

672 Shares
Some links above (including all Amazon links) are affiliate links, meaning that I earn from qualifying purchases. Learn more.