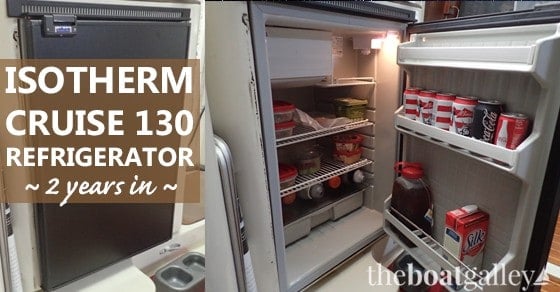 Two years ago, we replaced the original Dometic propane refrigerator that Barefoot Gal came with. After looking at all the various options, we went with an Isotherm Cruise 130 Classic (12-volt only) for the reasons in this post.

So, two years in, what do we think of it?

I’d give it a B. It is an immense improvement over the propane refrigerator we had (and which was rusting into oblivion) and I still don’t know of one that would have been better for us, but no, it’s not perfect.

The Isotherm Cruise 130 is energy efficient, using 5 amps when the compressor is running. Overall average (amount of time compressor runs and doesn’t) results in it using about 50 amp-hours a day in summer; less in winter.

It keeps food cold and the freezer will freeze anything I’ve ever put in it (unlike some boat freezers that will keep items frozen only if they are already frozen but won’t freeze from room temp). At the risk of stating the obvious, this is the basic function of a refrigerator and unfortunately one that not every boat fridge manages to do, particularly in the heat and humidity of a Florida Keys summer.

A big benefit for us was that it fit almost exactly into the cutout for our old refrigerator (we had to cut back about 1/4″ on one side of the opening). It was extremely easy to install as it is all one unit. One wire pair to connect.

Four items could be better on the Isotherm 130:

Isotherm did replace the first freezer door that broke and admonished me to defrost more frequently so that frost and ice wouldn’t break the second one. I have always defrosted when there’s a quarter inch of frost and ice, which is about two weeks with the high temps and humidity here.

I vowed to do even better with the second one. I defrosted the refrigerator, then installed the new door (installation is literally a snap and virtually impossible to do incorrectly). It broke two days later.

I didn’t bother to ask for another replacement that would simply break again. Seeing what the problem was, I knew that I could create a better hinge with a roll of Gorilla Tape (extra-tough duct tape). A bit of Reflectix (foil-faced bubble wrap) both insulated the freezer and made it seal much better. It does not look pretty but it works well.

The Isotherm Cruise 130 isn’t perfect but it is the best thing for our application. We wanted something that we could easily install — it was more important to us to have “something good” that was actually installed than “something perfect that took months and $$ to install (neither one of us is a carpenter to build a new surround).

It does what it is supposed to — keep food cold and frozen items frozen — with a minimum of energy. The design flaws have been things that we could correct in the field. Maybe not elegantly, but workably.

311 Shares
Some links above (including all Amazon links) are affiliate links, meaning that I earn from qualifying purchases. Learn more.