You are here: Home / Buying a Boat & Gear / Engine-Driven Refrigeration? 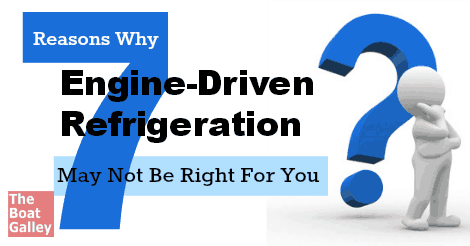 Periodically, I get an email from someone asking me whether I like engine-driven refrigeration, or how it compares to 12 volt, or something similar.  So here goes . . .

Okay, the “advantage” of engine-driven refrigeration is that it doesn’t take power from your house batteries.  It uses a pulley mounted on your engine to run the compressor.  But think about whether this is really an advantage.

If you use a 12-volt system, you can supply the power from any charging source you have — shore power, solar, wind, water, generator or yes, the engine and alternator.  Even if one source goes down, you can still have refrigeration as long as you’ve got an alternate source to charge the batteries.

Even if you’re charging the batteries for a 12-volt system by running the engine, it’s unlikely that you’ll have to run it as long as you would with an engine driven system (this depends somewhat on your alternator, but a new high-output alternator is cheap compared to the cost of running the engine longer).

Additionally, it’s rare to have an engine driven system that has a freezer compartment.  I’m not saying it can’t be done, just that it’s not the norm whereas most 12 volt systems do incorporate at least a small freezer.

Okay, so by now you’ve gotten the idea that I don’t really like engine-driven systems.  Fifteen years ago they were fairly popular on boats, but it’s rare to see a new one installed now unless it’s a dual source system.

Que Tal, our previous boat, actually had two totally separate refrigeration systems in the same box — one 12 volt and one engine driven. At some point way in the past, an owner had installed the engine-driven system.  Just before we bought her, however, the previous owner installed an Adler-Barbour 12 volt system but left the engine driven system in place.

If you really want redundant systems, this is the way to do it — two chill plates, two compressors, everything.  Nothing in common except the insulated box.  And so, when we motored, we would flip on the engine-driven system for an hour.  For one thing, the engine-driven chill plate was on the wall of the refrigerator next to the engine, so this blocked the engine heat (yes, this was a bad design but the way the boat came to us and we decided against totally rebuilding the galley . . .) and it’s also a good idea to periodically run any mechanical device to keep it lubricated and moving.

266 Shares
Some links above (including all Amazon links) are affiliate links, meaning that I earn from qualifying purchases. Learn more.