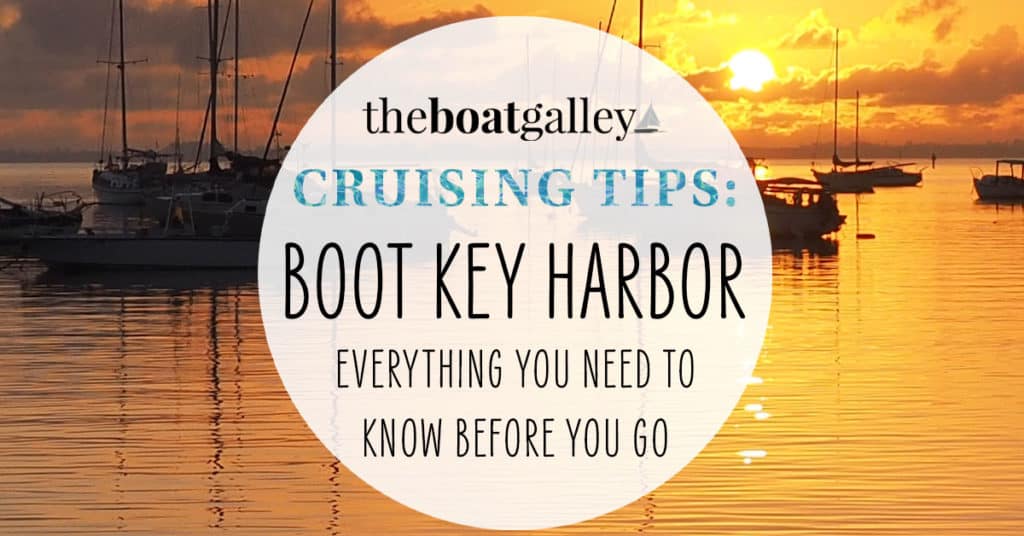 Boot Key Harbor, located in Marathon in the Florida Keys, is a major stopping point for cruisers. And with good reason – great protection in the winter winds, much cheaper than marinas in the Keys, lots of social activities and stores within walking distance.

But there are a few questions that new arrivals always seem to have – and that most cruising guides don’t address fully (or have outdated info on). So while I can’t address every question you may have, here’s some info that you should have BEFORE you get here.

IMPORTANT: I’m giving information to the best of my knowledge; my information may be incorrect or things may change at any time. If you have any questions, call the Marathon City Marina office at 305-289-8877.

Boot Key Harbor has three major shoal areas that are not particularly well marked. Every week, we see boats go aground. Not only is it bad for your boat, these are all sea grass beds where there is the potential for a fine of $1,000 (yes, one thousand dollars) for every square foot of sea grass that is disturbed. Should you go aground, the first thing to check is the tide. If it’s low tide, it’s generally best to just wait – the tide will float you off without further damage to your boat or the sea grass bed.

These areas are marked in red with the numbers 1, 2 and 3 on the picture below. There are widely spaced spar buoys in the vicinity of each of these – see the notes below.

1 – this is the big sea grass bed — locals call it “the flats.” Do not try to cross it in any sort of motorized boat. At low tide, even rowing dinghies may hit their oars; sailing dinghies will hit centerboards. See notes under DINGHIES for information on the dinghy channel across it.

2 – When proceeding down the channel from Green 19 to Green 21 (or vice versa), there are three spar buoys just to the east of mooring ball Q10 and then nothing between there and Green 21. However, the shoal area extends all the way from Q10 to Green 21 and across to where boats are moored. Draw an imaginary line from Green 19 to Green 21 and stay on the channel side of it. There is a tiny mangrove island in the vicinity of Green 21 – you must go SOUTH of it.

3 – this is a small area and hence easier to spot the markers. At low tide, you cannot even dinghy over it.

All of Boot Key Harbor is either an “Idle Speed-No Wake” or “Slow Speed-No Wake” zone. Until you’ve been here long enough to get a cruiser’s guide from the office and figure out which is where, treat all areas as idle zones. In particular, the dinghy channel, the areas around the dinghy docks and the channel beside the office are IDLE/NO WAKE zones.

Dinghies must have lights at night in compliance with state law. Motorized dinghies that can go more than 7 knots must have red/green bow lights and a white stern light; dinghies that cannot go over 7 knots are only required to have a white all-around light. If you have a rowing dinghy, you can check the laws to see if you must have a light but it is highly advisable to have one so that you don’t get run over. I’m serious.

If you leave your dinghy tied up astern of the “big boat” overnight, the dinghy must have an “anchor light” on it.

You must also comply with all laws regarding PFDs, fire extinguishers, sound devices and so on. Both FWC and the Coast Guard frequently patrol the area and stop boats for safety checks.

There is a dinghy channel along the north edge of the shoal area I’ve called number 1. It is marked with several sets of PVC stakes (go between the two in each set) and solar lights. The markers were greatly improved this past winter. I’ve highlighted this on the map below.  Boats larger than dinghies cannot use this channel.

It can be hard to figure out where your mooring ball is. The marina staff will try to give you an idea, but it’s best if you print out a copy of the map above and have it at the helm (just print this page if you want to). The row letters are a little hard to see on the map, but they’re there, in black, at each end of each row.

GETTING A MOORING BALL

Mooring balls are assigned first come, first served although there may be some consideration given to boat length and draft. There are no reservations.

You cannot request a mooring until you are in the mooring field area – east of the “bridge to nowhere” shown on most charts as a bascule bridge to Boot Key at the west end of the harbor (the lift section has been removed so it’s permanently open; the power line has also been removed, so there is unlimited air draft). If entering from Sister’s Creek, you must be out of the creek and in the mooring field channel. Call “Marathon City Marina” on channel 16 or call on the telephone – 305-289-8877.

Once the mooring field is full (2015, it filled up about December 1; it’s been getting earlier every year and it stays full generally until mid-February at least), boats go on a waiting list. You have to be in one of the nearby anchorages to go on the waiting list (there are several anchoring areas near the mooring field).

There’s been a lot of discussion this winter about what boats do and don’t have to have anchor lights. If you are anchored, it’s simple: you must have an anchor light on at night.

In the past, all boats in the mooring field were also required to have their anchor lights on; I’ve recently heard that only those on mooring balls bordering the channels will be required to have them on, but as enforcement of such laws can change, I’d have one on no matter where you’re located (we do). Use one with a photocell that turns on automatically at sunset and you don’t even have to think about it – we use and love a Davis Mega Light as it puts the light down closer to the water where dinghies are more likely to see it.

The latest interpretation that I’ve heard is that dinghies left in the water overnight must have an anchor light on in addition to the one on the “big boat;” those on davits or on deck do not (this rule seems to change periodically, too).

ANCHORING OUT and DINGHY DOCKS

You can anchor in a wide spot in Sister’s Creek (the south entrance to the harbor) with your stern tied off to the mangroves, or anchor either side of the bridge to nowhere at the west end of the harbor (the west entrance nearest the 7 Mile Bridge). When the waiting list is long, both areas will be crowded.

Sister’s Creek has some shallow spots and boats drawing over 5 feet should check charts carefully or talk to someone with local knowledge. We have never anchored there, but I’ve heard that the four large radio towers put out strong electrical interference and can cause anomalies in instruments; some people say it’s damaged their electronics.

Anchoring near the bridge to nowhere has its own challenges. Holding can be poor, so make sure to back down hard and test your set – it’s much better to find you’re not holding immediately than in the middle of a squall at 2 AM. The power line next to the bridge still shows on some charts, but was removed several years ago.

There are no free dinghy docks in the harbor; it is free to beach your dinghy at Sombrero Beach at the south end of Sister’s Creek but there are no stores or services there. It’s one of the few beaches in all the Keys that’s dog-friendly however.

You can pay to use City Marina’s dinghy dock, dumpster, showers, laundry (extra fee), water (extra fee), pump out and community room. That fee is currently $22/day, $85/week or $225/month. For weekly and monthly stays, you also get a vehicle parking space and can have mail and packages shipped to you at the marina address.

Burdine’s (outside the harbor on the west end) charges $8 per day (I don’t know what is included) and Dockside (at the far east end of the harbor) charges $5. Both of these restaurants let you tie up for free while you are eating or drinking there.

Very few businesses outside of those two restaurants and local marinas have dinghy docks. Older cruising guides say that West Marine does; that information is outdated and it does not. None of the local grocery stores have a nearby dinghy dock.

Laundry is expensive at $3 load for the washer and $3 for the dryer at City Marina – both water and electricity are expensive in the Keys. A very nice alternative if you have a car is the Marathon Laundromat (the only public laundromat in Marathon and newly open in Spring 2016) — rates are similar but there are extra large washers and dryers, air conditioning, fast free wifi and it’s much less crowded.

Just about everything is more expensive in the Keys, from groceries to eating out to boat supplies. Fuel costs more and water isn’t free. You can find bargains on some things, but expect your cost of living to go up in general.

The cruiser’s VHF net is on every day at 9AM local time on channel 68. Anything else you need to know, just ask on the net!

Marathon is a fun place, with lots to do and pretty much all the stores and services you could need. Enjoy your stay!

999 Shares
Some links in this article (including all Amazon links) are affiliate links, meaning that we earn from qualifying purchases.