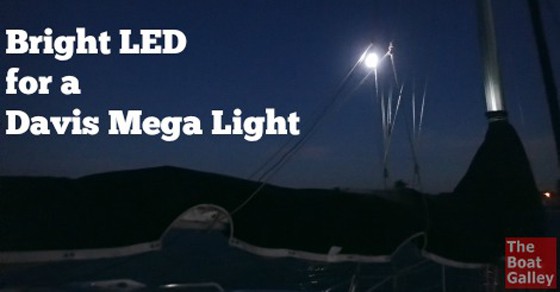 Davis Mega-Lights are nifty lights that can be used in the cockpit or as an anchor light in most places. We used one for years on our previous boat.

Davis Mega Lights plug into a cigarette lighter with a 15-foot cord, operate on a photo cell (that is, they turn on automatically at dusk and turn off automatically at dawn) and are low draw — the incandescent ones we used on Que Tal drew less than an amp.

When we first began cruising aboard Barefoot Gal, we were surprised to find that our masthead anchor light drew almost 3 amps. Multiply that by 13 or 14 hours a day that it’s on and it’s a huge power hog! Plus we had to remember to turn it on. And off.

The previous owner, however, had left an old Davis Mega Light on board — one with incandescent bulbs. We put it into use almost immediately and saw a major reduction in the power used. We simply clip it onto our lazyjacks with a stainless carabiner and take it off when sailing.

Then a friend clued us in to an even bigger power savings: a Davis light with a bright LED bulb. He was in the process of selling his boat and gave us an LED bulb from Cruising Solutions that he’d never used.

WOW! The light is much brighter and draws only 0.04 amp (not a typo — less than 1/10 amp). The bulb is very simple to change and contains 6 LEDs. It is visible well over 2 miles, meeting the standard for anchor lights.

Now I see that Cruising Solutions has an even brighter 15-LED bulb for the Davis Mega Light. This draws 0.1 amp (one-tenth of an amp). The boat behind us here at Boot Key Harbor has one of these and it is easy to pick out in the “starfield” of anchor lights. Of course, our LED will never burn out so it’s unlikely I’ll have to buy another, but yes, if I do, I’ll get the brighter one.

NOTE: These are not the “LED Davis Lights” or the LED replacement bulbs that are packaged by Davis. A friend couldn’t figure out why their LED Davis Light was nowhere near as bright as ours — turns out his had just one LED in the bulb, yet it drew over 1/10 amp. It just wasn’t bright enough to use as an anchor light despite what the company might say.

August 2017: Cruising Solutions has switched and now sells a 12-LED bulb for the Davis Lights. Get it here.

If you’re looking to buy a new Davis Mega Light, I’d get it from Cruising Solutions rather than Amazon, West Marine or other retailers, as Cruising Solutions sells them with the better LED bulbs already installed, so you don’t have to buy the bulb separately (and the whole thing is cheaper than what many retailers charge for just the light without the good LED bulb).

A couple of notes about the Davis Mega Lights:

1.5K Shares
Some links above (including all Amazon links) are affiliate links, meaning that I earn from qualifying purchases. Learn more.