You are here: Home / Boat Work / The Galley on the Hard 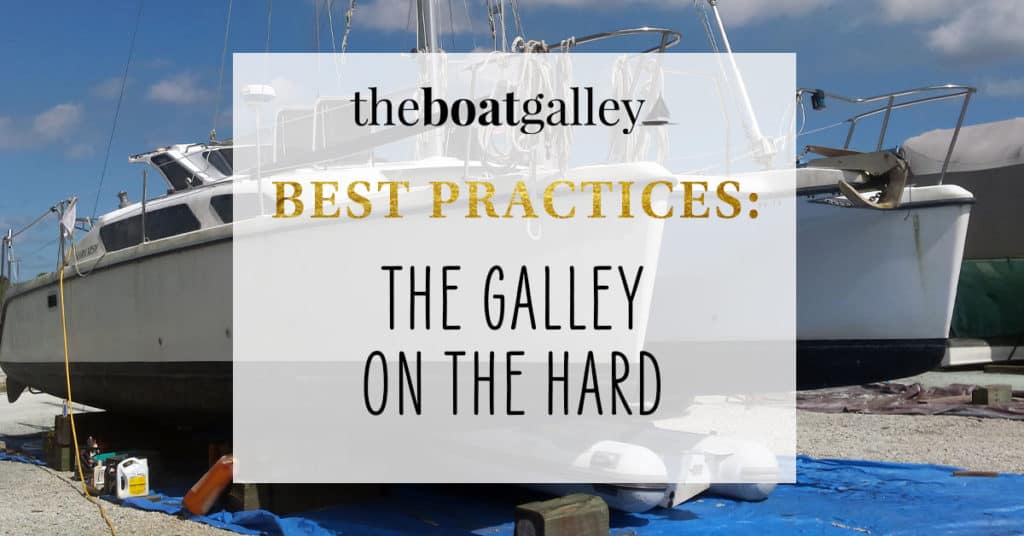 Is it possible to live aboard your boat when it’s hauled out?  The first time we hauled — just for a few days to paint the bottom — my inclination was to say no, just because I was terrified of ladders.  Heights didn’t bother me, ladders did.

However, once we started investigating motels within walking distance, I decided that I really didn’t want to spend $50 a night plus the expense of eating all our meals out.  I’d deal with the ladder.

The yard we were in (Marina del Palmar — aka Abaroa’s — in La Paz, Mexico) had a nice bathroom with tons of hot water for the showers, and a wonderful outdoor sink for dishes. The only bad thing was having to go down the ladder every time we needed the bathroom — even in the middle of the night!

I figured out a bunch of things in those few days.  Six months later we hauled for a total of four months on the hard as we did major work on the boat — replacing the teak decks with fiberglass, painting the boat, rigging upgrades and more — and we stayed aboard all but a few days when the boat was being painted.  That totally got me over my fear of ladders!

Four months of living on the hard taught me a lot about the “galley issues” that arise when living on a boat up in the air.  A few tips (and please add any of your own in the comments below):

While I’m not going to say that I just loved living on the hard, it wasn’t nearly as bad as I anticipated.  While quality of work and price are bigger considerations in choosing a yard, don’t totally overlook the facilities for living aboard (and there are some yards that prohibit it!).  A good shower facility and place to wash dishes can go a long ways in how you feel about your stay, as well as access to grocery stores, chandleries and even the “cruiser social scene” if you are going to be there more than just a few days.

695 Shares
Some links above (including all Amazon links) are affiliate links, meaning that I earn from qualifying purchases. Learn more.