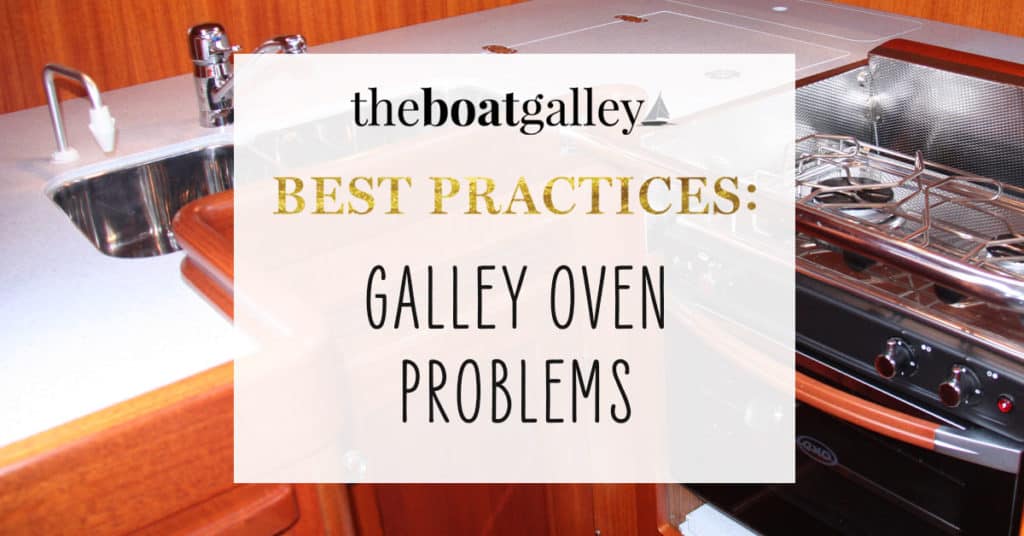 At first, a galley oven seems like a regular gas oven.  And it might be, if it’s a newer one.  Try baking in one that’s more than about 10 years old, though, and you’ll soon find some differences.  Below are some tips on dealing with the most common oven problems.

No Oven Thermostat or Thermometer

Older ovens, like the one I had aboard Que Tal, don’t have a thermostat where you just set a temperature and the oven heats to that and stays there.  Instead, it has an unmarked dial and then you have to look on the thermometer once the oven has heated up to see what the temperature is, and adjust from there.  Several of my friends also reported that their thermometer was not too accurate (I’ve heard that the sensor can get out of position and not read correctly).

If your oven doesn’t have a thermometer or it does not seem to be accurate, the first step is to get an oven thermometer.  It seems that none are 100% accurate, but reviews will show you which ones come closest.  Several other features are important, too:  made of stainless steel, able to be hung from a rack (the inside of some boat ovens are stainless so a magnet mount won’t work on them), and I like 350 being straight up.  If you’re cruising outside the US, it’s nice if it’s marked in both Farenheit and Celcius, so you don’t have to reach for a conversion chart when using local products.  Most oven thermometers are what is called “slow-reacting” – that is, the temperature readout doesn’t instantly drop when you open the oven door to look at it.  I’d also like one with big numbers, but the only one I’ve found with big numbers gets horrible reviews for accuracy.

Once you figure out about where to set the gas dial for 350 and 400, I suggest making a mark on the dial for each with a felt pen or a dab of nail polish.  You may still have to do a little adjusting each time you use the oven, but you’ll be in the right ballpark from the start.

This is one of the two biggest oven problems with a galley stove.  First, let’s look at some possible causes of a galley oven not being hot enough:

Despite all the troubleshooting, you may not find a cause – that was the case on Que Tal.  To cope with low oven temperature, I learned several tricks:

A good baking stone will cost somewhere around $50 (and you’ll probably have to have a tile shop cut it down to size), but it’s a lot cheaper and simpler than buying and installing a new stove.

The second common problem with boat ovens (typically older ones) is that they have uneven heat, or hot spots that cause some areas to burn.  Generally, this is due to one (or more) of three reasons:

There are three “nothing-to-buy” solutions to try, but they generally only provide partial relief for oven hot spots:

If your oven pans are on the thin side, they won’t conduct heat evenly and will also contribute to food scorching in spots.  My recommendation is heavy stainless pans, with high-quality nonstick such as the Chicago Metallic pans.  They’re sold on Amazon (amongst other places) and you can check out the huge variety of pan sizes available in the nonstick Chicago Metallic pans, many of which are actually of a useful size for a boat oven.  Yes, they are about 40% to 50% more expensive than the Baker’s Secret pans you can buy in every Wal-mart, but you’ll have much better results with them.  Not only are the Chicago Metallic pans heavier, the nonstick is higher quality, the pans clean up much better (less water used), they’re less likely to warp and will last far longer.  In the long run, they are less expensive as you won’t have to buy new pans every couple of years.

I use both a baking stone and a heavy Chicago Metallic pan and no longer have a problem with hot spots!

352 Shares
Some links above (including all Amazon links) are affiliate links, meaning that I earn from qualifying purchases. Learn more.

You don’t have to give up baking in the summer. Learn how I manage cooking & baking onboard on hot days. [More] How to Bake and Cook in the Heat

Clunk! The last thing you want to hear underway. Learn what happened and how we dealt with it. [More] Learning From a Sudden Break

How to use a simple self-priming valve to siphon liquids
[More] Shaker Siphon – Cool Tool!