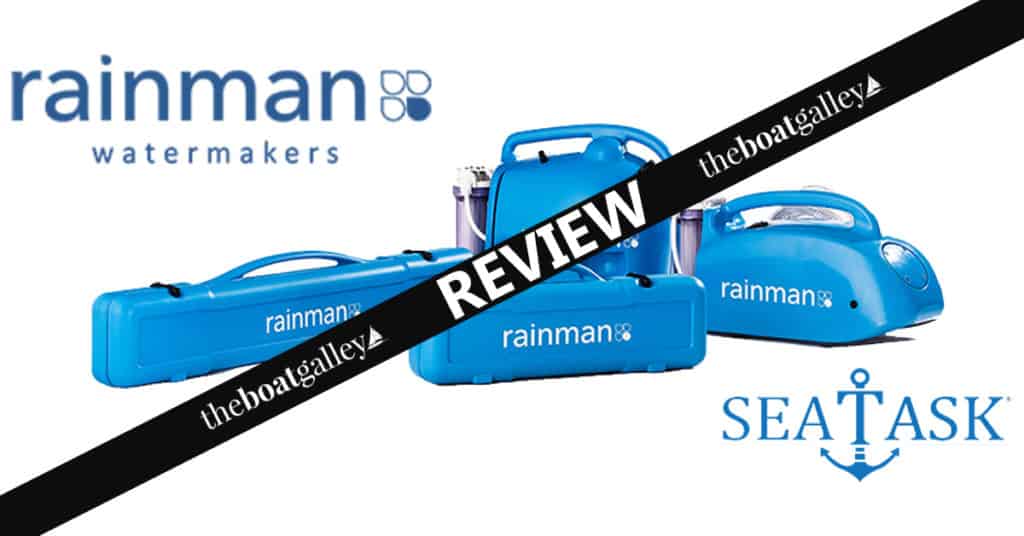 Six weeks ago, SeaTask Group in Fort Lauderdale, Florida (US) loaned us a Rainman Watermaker to use and review. After ten days with it, I published our first impressions and am now putting out the full review.

Summary: I love it. The Rainman works out of the box with no installation; all parts are off-the-shelf; it is designed to be able to be repaired by the average cruiser. It is a simple system, with no fancy bells and whistles, making repairs both less likely and easier. One switch for on/off; one valve to adjust the pressure. It just works, something that is all too rare in boat parts in general and watermakers in particular.

The System: We’ve been using their AC electrical system, run off a Honda 2000 generator, with their high capacity membranes (26 to 37 GPH). We’ve consistently been making 30 gph or slightly over here in the Florida Keys.

They also make a totally self-contained gasoline system (used mostly in disaster situations — most cruisers prefer to have a separate generator that can be used for other purposes as well) and a high capacity 12v system which uses 32 amps. The output varies depending on the membranes chosen.

The choice between AC or DC is a tough one; unless you have a large battery bank and plenty of solar/wind power, you’re probably going to have to run the watermaker while motoring or run a generator for power even if you opt for the DC system. DC, however, does provide the possibility of using solar and wind, or the engine/alternator, should your generator not work. SeaTask (and also our local electrical guru Alex Miller of Sea-Tek) say that the AC units can run off lithium batteries and a large inverter.

The units are nominally portable, meaning that they are relatively easy to move from boat to boat and do not require installation or intake and discharge through-hulls. This is a major plus for several owners I’ve talked to (it just so happened that last night we had dinner with two other couples that both had Rainman units on their boat). No need for a haul out to install a through hull. No need to wait for installation. It’s immediately usable. Further, while the systems are designed to be owner repaired if necessary, it makes it easy to move the unit to a more accessible place to work on it.

The portability/no installation is important for boat owners who are less than confident of their installation skills, as not having to hire someone can save $500 to $1,000 or more for a professional installation. And if there is a problem, it’s almost always cheaper if you can take your unit to a shop for service than if you have to have a technician come to your boat to work on it.

All that said, most owners do opt to “semi-install” both the pump unit and the membranes to secure them when underway. Some utilize through one or more through hulls while others continue to put the hoses out a convenient port. Using a through hull for the intake is better if you intend to use the unit underway — the hoses will otherwise rise towards the surface and can suck in air which is bad for the pump and membranes.

You can make your installation as simple or complex as you wish, with everything in the same compartment or the pump and membranes separated. And the pressure control valve can be separate from the membranes. It is still relatively simple to remove the pump unit or membranes for work.

Still, you have to find space for the two units somewhere. You can find the dimensions here. And this, really, is the only downside to the Rainman unit: you need one place that is large enough for the pump unit, instead of spreading it out as can be done with modular assemblies. The size of the membranes is comparable to other watermakers so isn’t a special problem for the Rainman — but is certainly something to consider. The option of the smaller membranes — at the “cost” of reduced output — makes the Rainman work for some boats that have a problem finding space for full 40″ membranes

Since we were only borrowing the unit, we did not give it a permanent home or make any connections to our water tanks. Consequently, it took about ten minutes to set the unit up each time we wanted to make water. For freshwater flushes, we put water into a jerry can. Overall, it would be much simpler to use if it were somewhat more installed with hoses not having to be hooked up before each use and if we could use the tank water (with a charcoal block filter on it) to do the freshwater flush.

One thing to note whether installing the unit or not is that the pump can lift water about 6 feet. If you have a higher lift, you’ll have to install and use a boost pump. See all the installation information here.

The watermakers that came on both of our boats had far less capacity than the Rainman. And we lived with it. But I have to say that being able to make 30 GPH is nice. We don’t spend nearly so much time making water in general, and if I want to do a water-intensive cleaning project, it’s no problem. And I love being able to shower on board without guilt at the water I’m using.

Bottom line: Our experience is that the Rainman is a great watermaker, particularly well-suited to boats that want a simple plug-and-play solution. Not needing to be fully installed makes it cheaper for anyone who is not a confident DIY-er, and easier to service for all. No proprietary parts also makes repair and ongoing maintenance cheaper and also achievable in remote places. It’s a solid unit that just plain works.

We love the unit and were all set to buy it instead of return it. Unfortunately, when we tried putting it in the space we wanted to, we discovered that the pump unit would not fit. We have a very small catamaran and really don’t have an alternative location that doesn’t have other problems. So, unfortunately, we’re going to be saying goodbye. I’m going to miss it.

509 Shares
Some links above (including all Amazon links) are affiliate links, meaning that I earn from qualifying purchases. Learn more.

Shopping for boat gear and parts? You may have more options than you think. Here are some great locations you should try. [More] Sources for Boat Parts

Is it worth having a SodaStream onboard? Here are the pros and cons for cruisers. [More] SodaStreams for Cruisers