You are here: Home / Cruising & Chartering / How To Prepare A Boat For A Major Hurricane 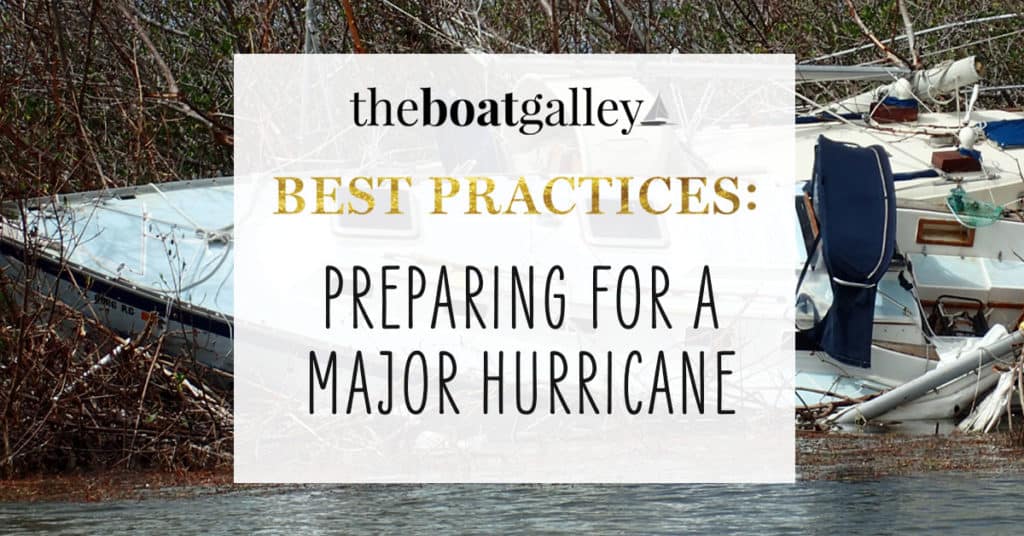 How do you prepare a boat for a hurricane? What do you do if there’s a major hurricane – Category 3 or above – bearing down on your boat? Surviving the storm involves a certain amount of luck but you can substantially up your odds with good preparation.

Here are my top tips, published in Cruising World (May 2018) as “10 Tips To Survive A Hurricane.”

Double-check your insurance policy for required preparation for a major hurricane. Also re-read the hurricane plan you filed, stating how you would prepare. Should a claim be necessary, you’ll have to prove you fulfilled your obligations.

Be sure to take your policy with you when you evacuate!

Sails must come down for any hurricane, doubly so for a major one. Tying off a roller furled sail (genoa or main) is simply not sufficient against hurricane-force winds, which will tug at the exposed edges of the sail and pull out a little pocket – first six inches, then twelve. It doesn’t seem like much, but when winds are 70, 100 or 130 knots, that’s enough sail area to put substantial pressure on your lines and anchoring.

Your sail will be shredded, but that’s not the worst part. During Hurricane Marty (2003, La Paz, Mexico), marina docks were pulled apart by “sailing” boats, which then crashed into other boats and docks, pulling them free as well. In other storms, we’ve seen cleats ripped out of docks and boat decks due to the force of the wind in just a scrap of unwound sail. Boats on the hard have been toppled or flipped, creating a chain reaction.

Additionally, most insurance policies will not pay out if sails are left on. Getting sails off is arguably the most important thing you can do to help your boat survive the storm. Read more.

Reducing windage is key to reducing the stresses on your lines, mooring/anchor or jackstands. Removing sails was the first – and biggest – part but get everything else inside that you can. Bimini, dodger, flags, grill, decorative lights, MOB pole and throwable, window covers, cockpit cushions . . . it all adds up.

Find a secure place inside the boat or ashore for the dinghy – davits are about the worst possible place as the dinghy will catch wind, act as a good-sized sail and possibly rip the davits off. Read more.

Having new lines of the right size and type is critical. Whether it’s dock lines, mooring lines or anchor snubbers, if your boat is in the water the lines are the only thing keeping it in place.

In Hurricane Irma, our boat was one of only a very few in Boot Key Harbor with literally zero damage. We think that it was roughly 50% luck as no other boats careened into us, but the other 50% was our prep – and part of that were our brand-spanking-new lines.

The boat right beside us, which did not put new lines on, broke free from its mooring and was a total loss. After the storm, I pulled up their mooring pennant with the remains of their mooring lines on it. Every single one had simply broken in the middle (not at a chafe point). Sunlight, stretching, chafe and salt all take a toll on the fibers with even a few months’ use, weakening the line and lessening its ability to stretch and absorb shock. Only one mooring failed in Boot Key Harbor, but 172 boats broke free of moorings.

Don’t use large, low-stretch lines for a storm. Lines need to be able to stretch to take the shock that waves and wind gusts will generate. Undersize lines can part from the shock loads but oversize lines that don’t stretch will pull cleats and other attachment points out.

Nylon three-strand rope is the best combination of strength, stretch and abrasion resistance. We use one size larger than our “everyday” lines as a compromise between the need for elasticity and strength. Read more.

The other part of the “line” equation is protecting them from chafe. Fire hose is the chafe gear of choice. Fire departments are required to periodically replace hoses and generally give the old away for free if you ask.

Cut pieces about 10” long. Make a small hole about an inch from one end, pass the line through the hose, and then use a piece of light line through the hole you made to tie the fire hose to the cleat, stanchion, or dock. Don’t tie the chafe gear to the line, despite what many books say. If you tie it to the line, it will not stay in the right place as the line stretches during the storm.

Use as many lines as possible, going to different attachment points on both ends. If one cleat, piling or dock section fails, you want something else holding your boat. Any long tails on lines should be tied off so that they don’t become damaging whips during the storm.

Disconnect from shore power – hurricanes and electricity are a bad combination. Close seacocks other than for bilge pumps and engine, if you leave the keys in the engine (see below).

We made a conscious decision to tie our solar panel in place for Hurricane Irma instead of removing it, realizing there was a good chance we’d lose it in the storm (we didn’t). But we were evacuating five days before the storm was forecast to arrive and we wanted our batteries to stay fully charged to power the bilge pumps if needed.

Don’t take just a few photos; take 50 to 100 detailed photos of how and where every line is attached and protected from chafe, as well as overall shots showing the sails off and decks stripped as well as the general configuration of lines. Be sure to take these with you!

Part of surviving a hurricane is not having another boat slam into yours. While location plays some role in this, don’t rely on luck alone. Having well-prepared boats around you is key. Once your boat is ready, see if any of your neighbors need a hand.

We have been told that most of the damage to boats in Boot Key Harbor during Irma was caused by one large boat that broke free, slammed into docks and broke them free, and then this whole pile started hitting other boats and breaking them free. In Hurricane Marty in La Paz, it was a few boats that had left roller-furling jibs on that that led to the destruction of most of one marina. Your boat is only as safe as the boats around it. Read more.

Should you lock your boat when you leave it? There are pros and cons; it’s a personal decision.

We did not lock Barefoot Gal when we evacuated for Irma, realizing that she could be looted while we were gone. We also left the keys in the ignition in case she broke free and needed to (and could) be moved.

We figured that if Barefoot Gal was damaged, someone might try to come aboard to save her (another boat in the harbor was lost before the storm when Good Samaritans couldn’t get inside quickly enough to stop her from sinking). Or someone might have needed tools, food or even a place to sleep. We decided that the potential reward of leaving the boat unlocked – both for us and others in the community – far outweighed any additional risk: we were already at serious risk of losing her!

Above all else, get yourself, your family and pets to a safe place. Much as it pains me to say it, boats are things. Don’t risk your life to try to protect yours. Evacuate early, particularly if you will have to use public transportation. Expect significant delays.

The first step in hurricane recovery is to survive the hurricane so that you can recover from it.

Unfortunately, major hurricanes result in sunken and wrecked boats littering the water, along with building debris. Some dangers are obvious, such as broken masts, tangled rigging and boards with nails protruding.

Less obvious is the fact that all the destroyed boats have severely polluted the water with diesel, gas, and oil, holding tank contents, battery acid, engine coolant and every other liquid aboard the boat.

Cuts that contact the water will quickly become infected; treat immediately with antibiotic ointment and seek medical help at the first sign of infection. If you get in the water to secure or refloat a boat, take extreme care not to swallow water or get it in your eyes or lungs. Again, seek medical attention immediately if you do – before you have any symptoms of a problem.

One friend of ours, preparing his sunken boat to be raised after Hurricane Irma, had a near-drowning experience and ended up on life support for six days due to the diesel fuel and other things coating his lungs (he did make a full recovery). Almost all divers had respiratory infections that required medical treatment. Read more.

727 Shares
Some links above (including all Amazon links) are affiliate links, meaning that I earn from qualifying purchases. Learn more.