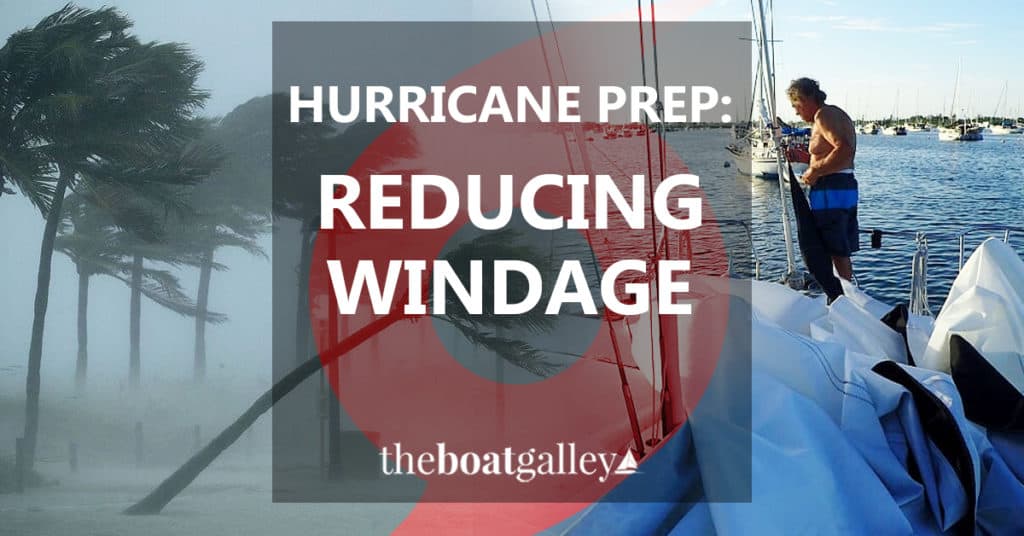 Whether your boat is at anchor, on a mooring, tied in the mangroves, at a dock or even hauled out, reducing windage is key to lessening the stress on the boat itself and also on its attachment points.

Even at anchor or on a mooring, the boat almost never lies perfectly head to wind. At a dock, tied to mangroves or in a boatyard, you can almost guarantee that it won’t be pointing directly into the wind. The smaller the profile of the boat, the less area for the wind to hit and bat it around.

That puts less stress on the rig overall, heels the boat less (heeling or rolling can really add to the wear on items . . . or flat break things), reduces chafe on lines and reduces the load on the anchor, mooring, dock, or anything else the boat is attached to.

I’ve written before about the importance of removing roller furling jibs and genoas due to their tendency to unroll and actually cause the boat to sail. But it’s also important to remove other sails (for sailboats) and everything that can be taken off the deck of the boat. A bonus is that you’re less likely to break or lose the items themselves!

NOTE: The same advice applies if you are storing your boat for hurricane season. Fully prep it before leaving it; don’t count on someone else to do it once a storm threatens. Every year I hear stories of how the person who was watching a boat simply didn’t have time to fully prep all the boats they were watching.

Having a mainsail on the boom is typically 4 to 5 times as large as just the boom. If you feel that you have to leave it on the boom, at least tightly lash it down both to reduce the size and minimize the damage to it. Yes, stackpacks are harder to remove, but they also have more windage than a traditional sail cover.

Dodgers and biminis also create significant windage. While hard ones can’t be removed, canvas should (and is a reason that they should be attached to frames with zippers — the original ones weren’t on our first cruising boat and we had them altered after just one bout of hurricane prep where we had to dismantle all the framing to get them off). During Hurricane Marty, some people left dodgers on to give them protection while on watch in the cockpit; some of those who did had significant damage to the canvas. If you will not be on board during the storm, there is no reason to leave any canvas on.

Dinghies both have considerable windage and can act as mini-sails to catch the wind. If at all possible to store them below deck or in a secure building ashore, do so. Davits are not a good choice — a dinghy that catches wind really adds to the windage, can break the davits and it can rain harder than any drain hole can allow water to escape (we had 22 inches of rain in one Tropical Storm . . . ). If you have to store an inflatable dinghy on deck, deflate it and tie it down extremely securely — wind will get under it and try to rip it loose, causing the big boat to yaw more and quite possibly damaging the dinghy. Hard dinghies can be sunk — but be careful with buoying them as boats may be motoring semi-out-of-control if their anchor dragged or they are trying to avoid a boat that’s dragging.

Dinghy motors should be removed and stored as for a passage (again, below deck or securely ashore is great but often the only real choice is on the stern rail).

Cockpit cushions should be brought below . . . before the first rain hits.

Flags, burgees, and decorations should all come down well ahead of the storm. They’ll be destroyed and yes, they do add a bit of windage and every inch counts.

Any removable lights (Luci lights, Davis lights, other cockpit lights) need to come down. Again, each little thing adds windage and since they’ll be destroyed if left out in a hurricane, why not?

Propane tanks (that are not in a propane locker) and fuel jerries are best left outside for safety reasons, but we set them into the cockpit and tied them down. Keep the area that you would steer from clear in case you have to motor during the storm. Water jerries should be brought inside.

Solar panels. Ugh. It would be best to remove them, but that’s not always practical. In Hurricane Marty, we left ours on — the four over the dodger were each attached with four rail clamps; the two larger ones were on the stern rail with two rail clamps each — we folded them down and tied them securely with several independent lines so that if one chafed through, the others would take up the load. On our current boat, we have one very large (345 watt) panel attached to the dinghy davits. We haven’t had to actually make a decision yet, but our tentative thought is to leave it in place if a category 1 or 2 storm is forecast but to cut the wires, dismount it and store it inside if a Cat 3 or above were forecast. Reality: I have a feeling if it looked like we’d have a direct hit by even a Cat 1, we’d remove it. It’s big and a lot of windage, could break our davits and flying debris could break the panel.

Safety gear. We have always taken in our horseshoe buoy and MOB pole. The unfortunate reality is that if someone were to go overboard in the storm, the gear is unlikely to be of any practical use in those conditions. It adds windage, and is likely to be torn off the boat or otherwise destroyed in the high winds.

Deck brushes, boat hooks, and other deck gear should all be placed in the lazarette or otherwise brought inside.

Canvas covers for jerry cans, hatches, winches and so on should be removed. With these, it’s not so much the windage as the fact that they are likely to be destroyed.

Every boat is different as to what’s on deck — take a walk around your deck and see what all could be removed. Swim ladder? Outboard crane? Kayak or SUP? Radar reflector? Cockpit table? Grill? Whisker/spinnaker pole? Add them all to your hurricane prep checklist.

Finally, take photos of your fully prepped boat. Should you have significant damage, photos showing an extremely well-prepared boat will go a long ways in an insurance claim.

390 Shares
Some links above (including all Amazon links) are affiliate links, meaning that I earn from qualifying purchases. Learn more.

When liveaboards need surgery, there’s a lot to think about. Learn from our experience when Dave got his hip replaced. [More] Managing Surgery When You Live on a Boat

A description of what projects needed to be done before we could head off – and why those were critical  [More] Get Her Seaworthy!

Ovens are great. But they take up a lot of space. And not every cruiser needs one. Do you? [More] Does Your Boat Need an Oven?