You are here: Home / Living on a Boat / Composting Toilet Tips 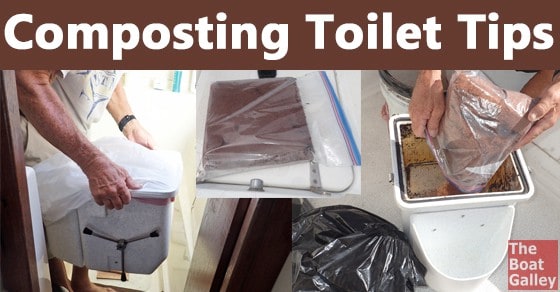 A little over a year ago, we changed from a traditional marine head to a Nature’s Head composting head. It’s been a learning process with the best info coming from other cruisers — readers left some very helpful info on my “Learning to Love our Composting Toilet” post. So now, our contribution in the spirit of “paying it forward.”

THIS IS THE LATEST POST ON OUR LEARNING CURVE AND IT SEEMS THAT WE FINALLY HAVE THINGS DIALED IN.

NOTE: We love the composting toilet and would never go back to a traditional marine head. So this isn’t a post to the effect that we regret it. We just wish there had been more complete information about how to use coconut coir as the compost medium (saying to add water “until moist but not wet” just wasn’t specific enough for us) and what to do if we did get flies. Figuring that others would probably like to know these things, too — here it is.

Coconut coir is a great compost medium. First off, it’s a readily renewable resource, whereas peat moss takes millions of years to form. Coconut also takes a lot less space to store and is far less likely to have bugs in it. But you do have to rehydrate it and crumble it up.

Okay, this section isn’t fun and no one seems to discuss it. But it’s a fact of having a composting head. Sometime, you’re going to have a fly infestation. It happens. Not all the time or even every year. But sometime. Frankly, we find it less nasty than having to change a joker valve to deal with clogged hoses in a traditional marine head. First, some prevention tips.

Fly infestations need to be dealt with as soon as you think you might even remotely have a problem. We had one . . . but it took us two tries to eliminate it as we just didn’t realize what drastic action was needed.

Hope this helps others making the transition to a composting head.

1.3K Shares
Some links above (including all Amazon links) are affiliate links, meaning that I earn from qualifying purchases. Learn more.