You are here: Home / Buying a Boat & Gear / Choosing Our Composting Toilet 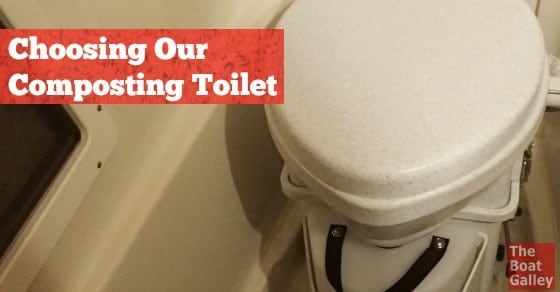 One of our big “home improvement” projects has been to change from a traditional wet marine head to a Nature’s Head Composting Toilet (using this link gets you an automatic $25 off at checkout if you buy one).

As we’ve been working on the project and I’ve been posting photos on The Boat Galley’s Facebook page, I keep getting two questions:

So why did we decide to switch to a composting head? It was a big project, both in terms of work and money, so why’d we do it? In a nutshell, pump outs, stink and time spent repairing the system:

We decided to bite the bullet and deal with the hoses, holding tank and everything else once. The total cost of the project was about $1400, not including yard time (it could be done in the water if you don’t intend to fill in the thru-hulls). The cost will vary depending on the brand/model of composting head chosen, whether you remove and fill the through hulls, any remodeling needed where the head will sit, the vent chosen and what small bits of hardware and wiring are needed.

The time involved will also vary considerably by whether you decide to fill in the thru-hulls and whether anything must be remodeled in the bathroom to accommodate the composting toilet. Once the space was ready, it only took a day to do the actual installation.

So why the Nature’s Head? There are three popular brands of composting toilets for boats: Nature’s Head, Air Head and C-Head. All three are good, solid designs and people seem happy with whichever one they choose.

On some boats, only one brand composting head will fit, so this makes the selection simple. The measurements for each brand are different so if one won’t work, it’s likely that another will — and some are designed to be used in v-shaped bow locations or against a sloping hull. We did not have any special circumstances that limited our choice.

As we were researching, we very quickly decided against the Air Head due to the need to use a coffee filter for solid “deposits.” Some may not be bothered by this, but it just seemed weird to us. Further, several people have said that the coffee filters can get tangled with the agitator in the composting medium. It makes it hard to crank and then they have to be cleared — a nasty job that just goes against many of the reasons we want a composting toilet.

So that left us choosing between the C-Head and the Nature’s Head. The C-Head actually was originally designed for Gemini catamarans, so it seemed like the obvious choice.

But as we talked to friends that had either a C-Head or Nature’s Head, several who had chosen the Nature’s Head gave the same reason for choosing it: the 2.2 gallon urine tank. If you like to entertain aboard — having people over for drinks or dinner — you do not want an overflowing pee bottle in the middle of the party!

That made the decision simple for us. A secondary factor was that we both preferred the way that the Nature’s Head looks.

All that said, I think that we would have been happy with whatever brand we chose. Almost every person I’ve known with a composting head says it’s one of the best upgrades they’ve done . . . regardless of what brand they chose.

701 Shares
Some links in this article (including all Amazon links) are affiliate links, meaning that we earn from qualifying purchases.