You are here: Home / Living on a Boat / Our Composting Toilet 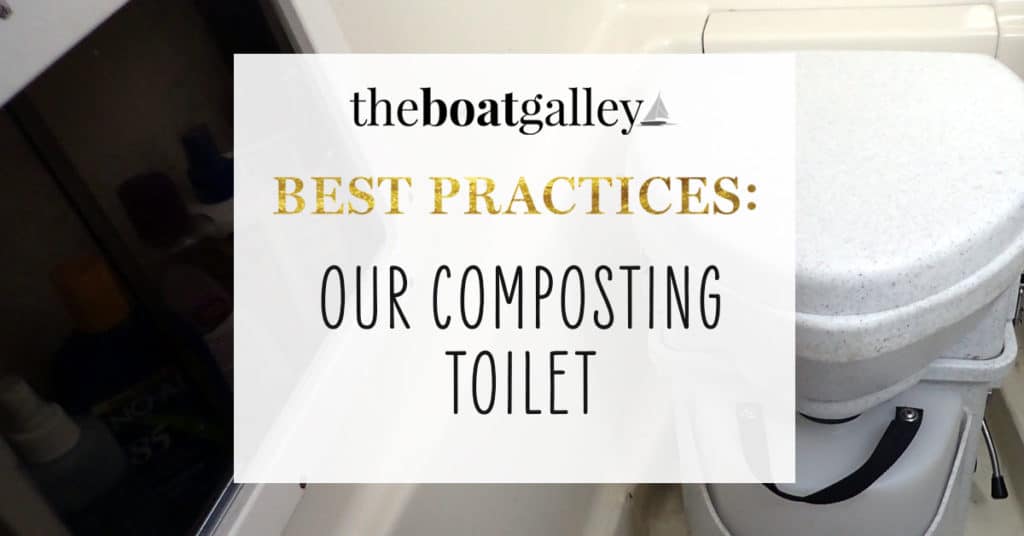 Eight months ago, we ripped out our standard marine head and replace it with a Nature’s Head composting toilet (note: should you decide to get one, using the links here will get you an automatic $25 off at checkout). So, how are we liking it and what have we learned?

Bottom line: we’re really happy that we made the switch, but there has been much more of a learning curve than we expected . . . and in talking to numerous other people with composting heads, that seems to be the case for well over half of new owners.

We like it for all the reasons we thought we would – no holding tank (ours was tiny), no pumpouts, virtually no smell, and the ability to be in remote places for long periods.

But it has taken us eight months to get to this point . . . and at times we really wondered if we had done the right thing. Did everyone just say they liked their composting head to justify having bought one?

Here is what we wish someone had told us when we first began using the Nature’s Head. Hopefully, it will help others who have installed one or are thinking of doing so.

IMPORTANT: I have written an updated version of this post where we’ve improved things even more. I’ve noted the changes below, but suggest reading the updated one instead: Composting Toilet Tips.

First off, it’s important to know that we’re using coconut coir as the “composting medium” as opposed to peat moss.

Coconut coir has to have water added to it and then be crumbled up before use. It expands tremendously as water is added. So here’s the dilemma: add too much water and you’ll have a foul seepage around the crank handle; don’t add enough and it will absorb water from the waste deposits and expand and overfill the compartment so that the handle won’t turn.

We had both problems as we tried to figure out the system. At first we added the amount of water stated on the coconut package for reconstituting it to use in a garden as a soil additive . . . which was way too much. We were then told to use just 5 cups of water per brick . . . but given no size or weight info on the “brick.” That was way too little. Finally, we were able to find out exactly how much water someone was using for a specific weight brick and were able to extrapolate from there to our bricks:

NOTE: We do not put toilet paper into the compost bin. It takes up space and can tangle with the agitator. We never put paper in our regular marine head, so it wasn’t a big change for us.

HOW OFTEN TO CHANGE

We have learned to change the composting medium at about 3 weeks, or 21 days. There are two of us aboard full-time. We’ve tried letting it go longer but frankly, it was pretty nasty to change. By changing it sooner, it’s a lot nicer job. Pre-purchase, things we read led us to believe that we’d get 30 days between changes. My guess is that those people perhaps work ashore. Other brands, number of people and so on will require a different schedule . . . but the bottom line is that if it’s nasty job, you’ve let it go too long. Try a shorter interval.

Now that we’ve got the procedure down and aren’t having to clean up a mess because of too-watery coconut, it takes us about 30 minutes to change it.

If you are using the unit full time, it will not be anywhere close to composted when you change it. This is a misnomer. Unless it goes into a compost bin for considerably longer, it is not compost. Even if it is left long enough to compost, it should never be used on food crops.

By not using peat, we’ve cut down on the bugs considerably. But let’s face it, we live in the tropics. There are bugs. And they love poop. Anything you read will tell you to use various amounts of diatomaceous earth to get rid of them (see what we bought on Amazon). It did not solve the problem for us and apparently for some others we know in the tropics.

Oh, we still use some diatomaceous earth as we don’t know if the problem would be worse without it, but a friend told us of another product that has helped far more: Rid-X Septic Tank Treatment Packs (Amazon). We use 1/2 of a pack at a time and mix it into the fresh compost when we change it. It’s a dry powder that helps the waste break down faster, the theory being that bugs aren’t interested in the waste once it starts to break down.

We hooked the vent hose up to our old pump out port and put a mushroom vent on it. Nature’s Head comes with a fan that is wired into our 12-volt system and draws next to nothing. Three things that we’ve learned:

There is very little odor associated with the composting head, but there can be a little when the compost bin has been open while emptying the urine or when changing the compost (or if you have a problem with urine getting in the compost or too-wet compost). There can also be a little smell when we’re underway and the vent is turned off.

Instead of air fresheners, we found a product we like much better:  Med-Aire Biological Odor Eliminator (Amazon) – it was designed for hospitals, nursing homes and the like to actually remove odors instead of covering them up. I also use a quick squirt of it in the trash can where the used paper goes. An 8-ounce spray bottle lasts us over a year. (It will also remove odor due to seasickness and almost anything else that’s “biological” including dog and cat odors.)

Almost everyone, it seems, has problems getting the coconut/water ratio right to begin with, and most internet sources just give descriptive terms such as “moist” or “not wet” or “quite dry.” Those are all very subjective and we found them not helpful. Even the YouTube videos we watched of someone preparing coconut coir didn’t give a “recipe.”

Once someone told us their mix ratio, 90% of our problems were solved. It’s also important to use less coconut in the initial fill than peat moss, as coconut swells as it absorbs water and peat doesn’t.

Someone asked me about the “yuck” factor of dealing with emptying the urine bottle and changing compost. We find both to be far less objectionable than changing joker valves, pumps and hoses on a traditional marine head . . . all of which occurred with annoying frequency. Those parts also cost considerably more than the coconut we use. Finally, dumping urine or changing coconut are relatively quick jobs compared to many of those on a traditional head and, if something else is going on, changing the compost can be put off a day or two. If a traditonal head has a blocked hose, sorry – it has to be fixed right then.

The benefits of the composting head are tremendous and will pay off for years. We don’t regret switching at all and recommend the Nature’s Head brand (admittedly, we have no experience with other brands). It is so much better than dealing with a traditional marine head . . . and we now have two fewer thru hulls!