You are here: Home / Other / Media Crema Recipes and Uses 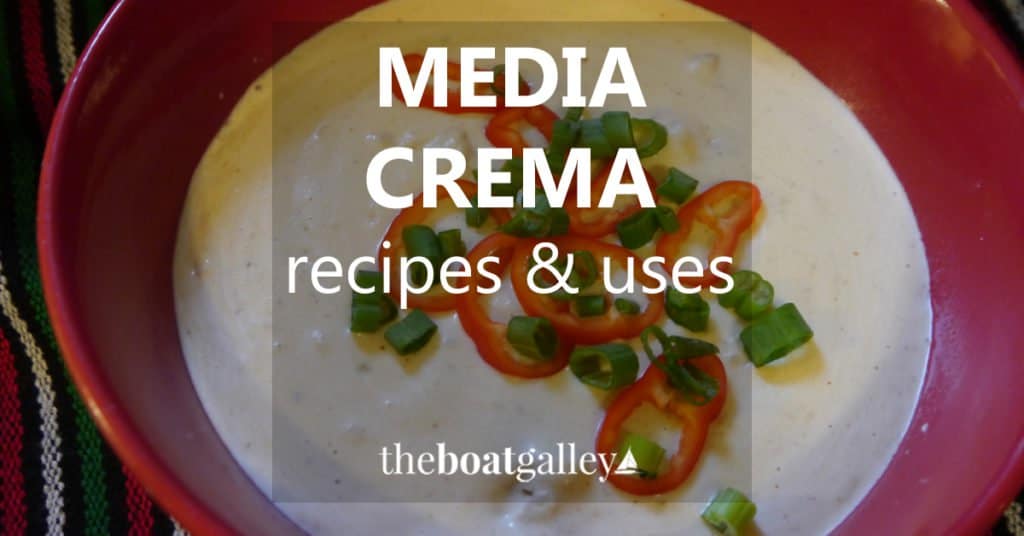 Media crema is half-and-half or light cream that comes in a can or box. It doesn’t need to be refrigerated until you open it. Keep some in your pantry and you’ll always have cream on hand to add a touch of richness to any dish that calls for milk.

You’ll find media crema in the Latin foods aisle of most grocery stores, or in a Mexican grocery.  Of course, in Latin America, you’ll find it in just about every grocery store everywhere — even in fishing villages. Table cream is similar although not quite as rich. Media crema is not the same thing as evaporated milk or sweetened condensed milk.

I’ve never seen it in little boxes in US, but that’s often how we bought it in Mexico — and one box or can holds just about 1 cup (it varies slightly by manufacturer).

Unopened, media crema will last six months or more and can be stored just about anywhere. The solids will settle to some extent, so be sure to scrape out the container when you go to use it. Don’t just pour out the contents and miss the richest part.

I use media crema in lots of different dishes.  My favorites where it’s just SO much better than milk:

The only bad side to media crema is the fat and calories — yep, unfortunately, it IS just like using cream.  If you’re looking for a lower fat option, use evaporated milk — it also comes in a can and will last nearly forever.  It’s not nearly as thick and rich, though.  And you can’t make sour cream from evaporated milk.

902 Shares
Some links above (including all Amazon links) are affiliate links, meaning that I earn from qualifying purchases. Learn more.

Is the hanging locker on your boat useless space? Here’s an easy DIY plan for getting more from that space.    [More] Get Better Use from a Hanging Locker

Struggling to manage the stress of cruising? There are a few ways to increase your confidence. Try these.  [More] How to Avoid Cruiser Stress

Need to work your heart on a boat–level up. Here’s how. [More] Cardio Aboard