You are here: Home / Living on a Boat / Why You Should Turn Off the Water Pump on Your Boat 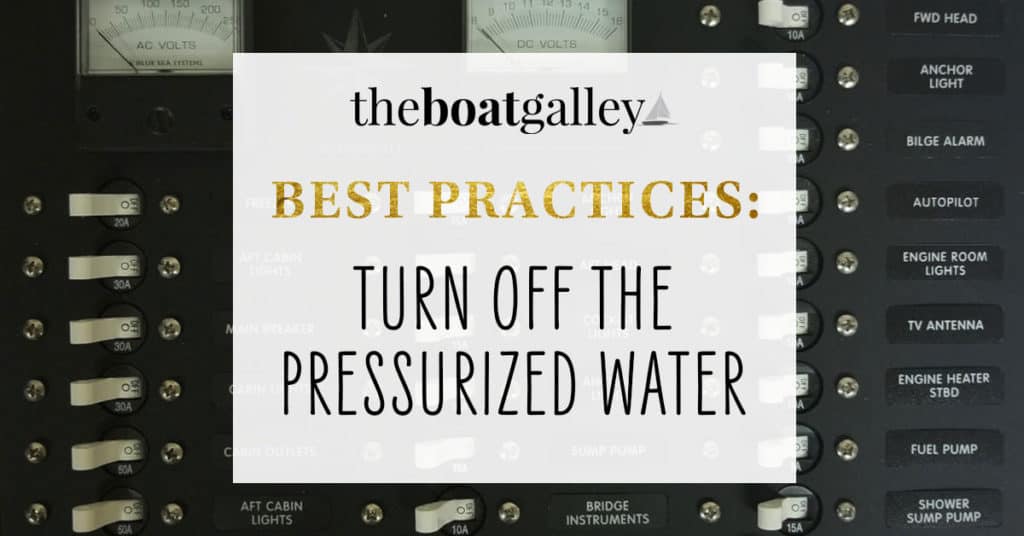 This post arises out of a “Voice of Experience” article in SAIL magazine (read it here).  In brief, it’s the story of a fresh water hose clamp that came loose while underway from Florida to the Bahamas.  With the clamp loose, the pressure switch on the freshwater pump kept the pump on — pumping all the water from the tank into the bilge and threatening the batteries and engine.

The engine noise — and then the bilge pump noise — obscured what was happening, so that the owners didn’t initially realize what the problem was.

So, three basic tips from this:

When motoring, you may get a little water in the bilge from the packing gland.  For us, it meant that if we didn’t run the “little” bilge pump (we had two — one large capacity that was mounted higher in the bilge and wired with a float switch and alarm, and one smaller one with only a manual switch and no alarm, with the intake in the very bottom of the bilge) every few hours, the big pump would go off after about 4 hours of motoring.

We learned that if we were motoring, we should run the little bilge pump every hour when we made our log entries and at the end of a trip.  That took care of the packing gland drip. And that made it so that when the whooper went off, we knew we had a problem.

Twice it did go off in the middle of the night.  And yes, we woke in an absolute panic.  The fact that the pump turned off after about 30 seconds calmed us slightly — obviously the pump could keep up.  With one, the taste test revealed it was fresh water and we discovered a pinhole leak in our freshwater tank.  The other was salt water and turned out to be a problem when the stuffing box (which contains the packing gland) had been removed and reinstalled on a haul out — we had just relaunched.

Turning off the freshwater pump when you’re not using it reduces the possibilities of a problem occurring.  And if you only turn it on when you need it, you’ll immediately realize that you have a problem if you turn it on — without a faucet open — and it starts running and doesn’t quickly stop (often, it’ll run a few seconds when you first turn it on).

Yes, we had that happen too.  And we were able to find the problem fairly quickly — a faulty pressure switch in the pump — as we were able to verify that no water was flowing into the bilge.  That meant that there wasn’t a loose connection or hole/crack in a hose.  We could easily see that there wasn’t a leaking faucet.  Changing out the pump — we had a duplicate in our spares — took only about 30 minutes and solved the problem.

Okay, that last part was a bit of a digression from the main point of this post — a good “standard operating procedure” in the galley — but it’s a good example of how you can troubleshoot a problem such as this.

404 Shares
Some links in this article (including all Amazon links) are affiliate links, meaning that we earn from qualifying purchases.