You are here: Home / Buying a Boat & Gear / Why Have a Bilge Alarm? 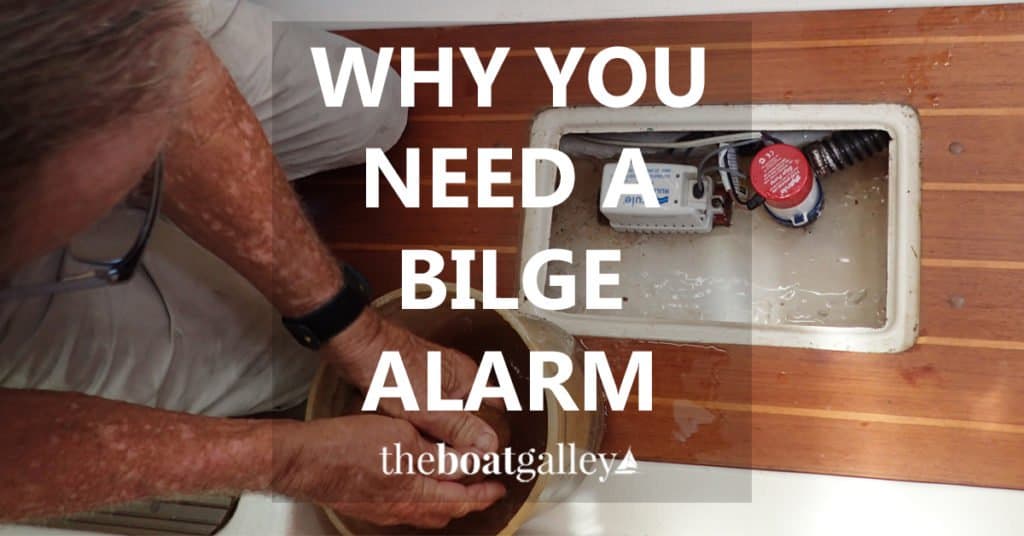 I didn’t intend to write about our bilge alarm today. Sometimes life makes choices for you.

We were doing our normal morning stuff aboard Barefoot Gal. I was replying to some emails and Dave had just brushed his teeth. And suddenly was a loud whistle noise coming from the port side of the boat. The bilge alarm??

Dave was standing right over the bilge access panel and looked in. He was rather shocked to find a couple of inches of water in the bilge, which is normally totally dry (Barefoot Gal is a catamaran, there’s no stuffing box and her bilges are very shallow). We typically check it every few days and there is just never anything in it.

The water wasn’t yet deep enough for the automatic bilge pump to kick on yet. But the alarm had let us know that we needed to check out a potential problem.

And so we’re checking. The first thing to check in a situation like this is whether the water is fresh or salt, so you know where to start looking. And next check the rate of flow.

Our leak is nothing that is going to sink the boat, that much was immediately clear. After a full day of checking, we know lots of things that it’s not. We’ve checked all the potentially big problem areas and they’re not problems. We finally have concluded that there was a tiny crack in a water hose where it went on a hose barb. We’ve fixed that and will see if any more water appears. We’re now checking the bilge every 30 minutes. But really, the source of the water isn’t the topic of this article.

What I want to write about here is the importance of having a bilge alarm. It let us know there was a problem even before the bilge pump kicked on — had it been a big problem, even a few minutes early warning could have been critical.

Twice on our previous boat, our bilge alarm alerted us to problems: once an improperly replaced stuffing box after we’d been on the hard and another time that we had a pinhole leak in our fresh water tank.

You can do bilge alarms several different ways:

We opted for a “hot water heater” alarm that runs on a 9-volt battery. It’s not as loud as some others, but still loud enough that we can hear it over the diesel engine. We like that in an emergency, we can silence it by drying the contacts or just pulling the battery. While we like having an alarm tell us of a problem, we do not like one constantly sounding as we are troubleshooting! It says that one battery will last up to 5 years and the alarm will sound for 3 days if activated; just to be on the safe side, we use a lithium 9 volt battery and replace it every year on our anniversary (the old one gets put into a blood pressure cuff where we’ll see if it dies).

You can buy 12 volt or battery-powered alarms many places, such as automotive, hardware or home improvement stores. There are probably hundreds of different models available and they’re quite inexpensive for the peace of mind. Marine stores also sell more expensive “marine” alarms, and I honestly don’t see that they are any better. For both boats, we’ve bought alarms on Amazon:

I have not used an alarm that sends a message, but a guy that stopped by our booth did tell me about one they were using while I was at the Annapolis Sailboat Show. A particularly nice feature of this one is that it is powered by a cord that plugs into a USB socket, which most boats have. Then you simply need a reasonably good wifi connection (not a hotspot from your phone which will not be available when you take your phone off the boat).