You are here: Home / Recipes / Make Your Own Taco Seasoning 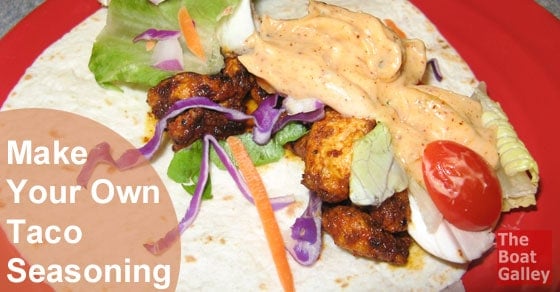 One of the first things I learned aboard Que Tal was that packaged seasoning mixes don’t mix well with the typical humidity on a boat.  The previous owners had left several packages of taco seasoning and I got one out to use the first week we were aboard.  Imagine my surprise as I opened it to find it all globbed together and moldy!

Hmm, time to learn to make my own! (Learning how to store spices and packets was also a priority.) And as we cruised Mexico and Central America, I almost never saw packaged taco seasoning — Mexican tacos are actually quite different from what we call tacos in the US.

Over time, I experimented with my seasoning mix and actually like it better than what comes in the packets.  Three other benefits:

Unlike the packaged mixes, this does not contain any cornstarch and you don’t need to add water as you’re cooking the taco meat.  With ground beef, I generally just sprinkle the seasoning over the meat as I’m browning it.  For chicken or fish, I put the seasoning and the meat in a plastic bag and shake to coat it all before cooking.

You can use it in other recipes just as you’d use a packet of seasoning.

Makes enough to season 1 pound of meat. Make as mild or spicy as you desire by changing the amount of chili powder and cayenne. If you use the full amounts of the chili powder and cayenne, this is spicier than most packaged mixes. It probably won’t make tears come to your eyes, but it’s definitely spicy. I like it, but I like things spicier than most Midwesterners (those used to eating Tex-Mex probably won’t find it overly hot). If using with ground beef, sprinkle over meat as it’s browning. If using with fish or chicken, coat meat before cooking. Do not add any water to the meat.
Nutrition Facts
Taco Seasoning
Amount Per Serving
Calories 41 Calories from Fat 9
% Daily Value*
Fat 1g2%
Saturated Fat 0g0%
Cholesterol 0mg0%
Sodium 71mg3%
Potassium 113mg3%
Carbohydrates 8g3%
Fiber 2g8%
Sugar 0g0%
Protein 1g2%
Vitamin A 1395IU28%
Calcium 29mg3%
Iron 1.9mg11%
* Percent Daily Values are based on a 2000 calorie diet.

901 Shares
Some links in this article (including all Amazon links) are affiliate links, meaning that we earn from qualifying purchases.