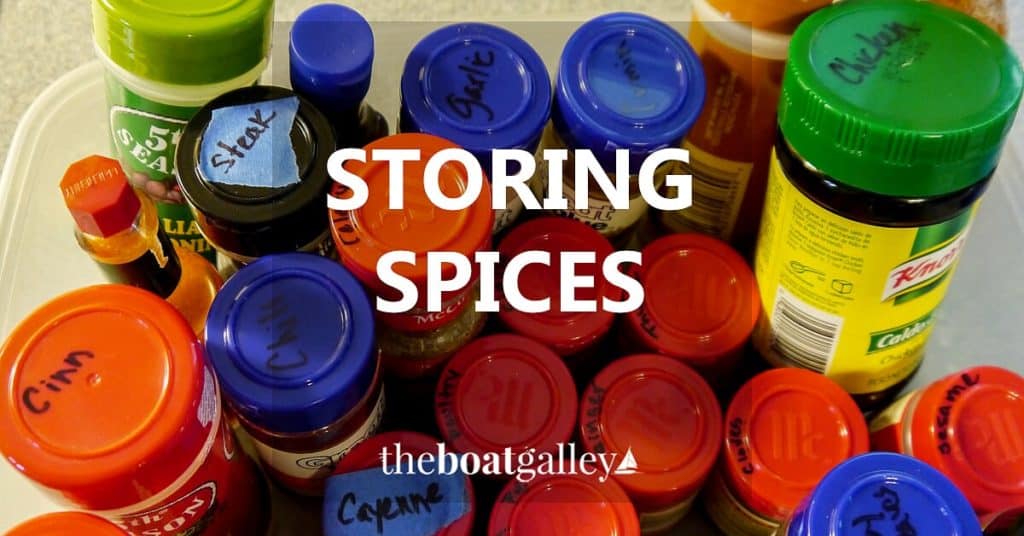 Ever make a pot of chili and notice that it’s just not as spicy as usual?  Or your garlic shrimp just isn’t very garlicky?

Spices seem to be one of the hardest things to store on a boat.  Not that containers break, or critters invade.  It’s just that spices can lose their flavor quickly in the typical storage conditions aboard a boat.  And the whole point of spices are to add flavor to a dish.

Mix packets are another problem item.  There’s nothing like scoring a “find” of taco mix and buying several packets — and then when you go to use some a month later, opening the packet and discovering that it’s a hard lump that’s starting to mold.

Keeping your spices and mix packets in good shape takes a bit of work and you probably won’t end up storing them in the most convenient spot — particularly if you’re in the tropics!

The two enemies of spices and mix packets are heat and moisture.  While these are both obviously abundant in the tropics, you have to watch out even in the upper midwest in the summer, particularly if you don’t live aboard full-time.  I grew up in Michigan and know well how hot a closed-up boat can get in the summer.

So what can you do to ensure that your spices stay flavorful and packets are usable?

I try not to buy more of any spice than I am likely to use in 6 months.  On one hand, this bugs me as larger containers cost less per ounce.  But what I have to consider is how much a particular size will cost me over the amount of time that I actually use it.  If a large container cost $5 and I have to throw half of it away after 6 months, it cost me $5 for that 6 months.  If a smaller container costs $4 but it’s pretty well used up in 6 months, well, I saved a dollar.

Normally, I like to keep a stock of various foods on hand — particularly things that can be hard to find where we’re cruising.  That doesn’t work with spices and packets.

For spices, I wait until I’m almost out of an item to buy more.  If I can’t find it immediately, sometimes this means that I have to do without for a while.

For packets, I don’t buy more than what I’ll use in the next 6 months — and only buy more when I use some.

Check Packets When You Buy Them

When I buy packets, I’ve learned to shake each one to make sure that the contents aren’t already “lumped.”

During the course of our 6 years of full-time cruising, I also got so that I used fewer and fewer packets, primarily because it was hard to find ones that hadn’t already picked up moisture.  While packets had seemed like such a good idea for quickly making some things, I found that making things from scratch didn’t take much more time and the results were far more predictable than hoping the packet contents would still be in good shape.

Use the Oldest First

With spices, it’s relatively easy to use the oldest first — it’s the one that’s open.

For packets, I make it a practice to put the new ones behind the old ones when putting them away.

Make Sure Spice Containers Are Airtight

Outside the US, spices are often sold in bulk or in small cellophane bags.  Even in the US, spices sold in metal containers with plastic flip tops aren’t usually airtight.

You can either put spice containers inside freezer Ziploc bags (the regular Ziplocs aren’t airtight enough in my experience) or transfer your spices to airtight containers.

Initially, I put the packets I had (primarily dip mixes, alfredo sauce mix, and taco seasoning packets) in regular Ziploc bags and then stuck then in an open bin.  After a couple of months, I discovered that just wasn’t good enough.  Moisture was still getting in.

My solution was to still put the packets in Ziplocs so that all the packets of one thing were together — this was primarily to make it easy to find things and also to know when I was getting low on something.  But then I got some high-quality lidded plastic containers — Lock & Lock or Rubbermail Lock-Its, both have gaskets — and put as many of the Ziploc bags in one as would fit.

You can either use one large container or several smaller ones, depending on where you’re going to store it.  Which brings up the final point . . .

Store Your Spices and Packets in the Coolest Spots

All too often, boats come with spice shelves or racks either over or next to the stove.  Or nice and high on an adjacent wall.

Unfortunately, these really convenient spots are about the worst for preserving the life of your spices.  You need to keep both spices and various packet mixes as far away from the heat of the stove and oven as possible.  And since heat rises, they also need to be kept low.  On Que Tal, I did some tests with a thermometer and discovered that in the saloon — away from the stove — it was about 20 degrees warmer near the ceiling than the floor during the summer.

I ended up keeping my spices in a drawer just off the floor.  And the plastic bin of packets in a locker under the settee.  Extras of both were under the floor.

And don’t forget to put wasabi and horseradish in the refrigerator (see article).

I’ll admit that at first it seemed a bit of a pain to get my spices out when I was cooking.  I was used to having them right at hand when living ashore.  But the reward was having flavorful food — and that’s what using spices is all about!

670 Shares
Some links above (including all Amazon links) are affiliate links, meaning that I earn from qualifying purchases. Learn more.