You are here: Home / Buying a Boat & Gear / Stove Considerations 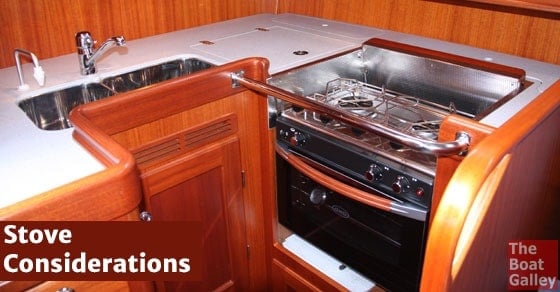 A few weeks ago, I wrote a post about how many of the boats on display at the Annapolis Sailboat Show had small 2-burner stoves and while that may not be much of a problem when cooking on top of the stove, it also made for a small oven.

In the very lively discussions that ensued on Facebook and in the comments, I heard a number of different things relating to stove choice and wanted to gather them here — and possibly add more via Facebook and additional comments.

Not All 3-Burner Stoves Are Large

Over and over, people commented about the burners being so close together that it was impossible to actually fit three pans on the stove — more than a few even had problems with 2!

In researching this further, I believe that my Force 10 stove was a 3-burner “American standard” size — and that’s the largest size for the three burner stoves. I never had a problem with using three pans and didn’t realize that some of the 3-burner stoves were so small. But yes, they are.

If you are looking at stoves in person, I’d suggest taking along at least one of your larger pans. By placing it on a burner, you can very quickly see how it will or won’t infringe on using the other burners.

If you are looking at stoves online, it can be VERY hard to find detailed info on burner layout. I spent over an hour looking at several manufacturers’ web sites and found none. I could find all sorts of overall dimensions and information for installing, but none showing dimensions of the burners and space between.

Nonetheless, it’s probably one of the most important factors in how happy you’ll be with the stove, and I agree with several readers who felt that there was no point in having three burners if you could never use more than one!

“BTU” stands for British Thermal Unit and is a measurement of how much heat something puts out. Higher numbers mean more heat. (Note: BTUs are used for propane, CNG and alcohol stoves; watts are used for electrical stoves — same concept.)

In general — and there are no hard-and-fast rules on this — you need about 7,000 BTUs to saute effectively (brown meats, stir fry) or boil a pot of water with any speed. If you plan to use an Omnia Stove Top Oven, you’re going to need a burner with close to this heat in order to preheat the oven properly.

Many different brands of marine stove have one or more burners with 8,000 to 9,000 BTUs (and sometimes more). That’s great for fast cooking, but not so great for slow simmering. These burners are almost impossible to turn down to a nice low setting — they go out first.

I had this problem and got what’s called a “flame tamer” to keep from burning everything I made. They cost about $7 — the cheapies work just as well as the really expensive ones — and I wrote about them here.

The better way is to have at least one burner with lower BTUs — what many companies call a simmer burner. These are typically 3,000 to 5,000 BTUs.

When you look at a stove, the larger burners typically have higher BTUs and the smaller ones have lower. Some manufacturers/models have all burners the same size and usually (but not always, as nothing is “standard”) that means they have the same BTUs.

The good news is that the spec sheets from every manufacturer that I checked did list the BTUs for the individual burners, often saying something like “one 9200 BTU burner and two 3400 BTU burners.”

My personal preference would be to have at least one higher BTU burner and one lower, but you know how you cook.

Many marine ovens come standard with a broiler, but some brands make models with and without. I’m betting that a lot of readers are asking why they’d ever use a broiler. How about if I said I used it almost every day?

We didn’t have a toaster and my preferred method of making toast was under the broiler — very quick and easy. Admittedly, there are other ways of making toast on a boat (read here and here), but given a choice I’d prefer to have a broiler and do it that way.

As a side note, the tiny house we bought when we moved back ashore has the only “land” oven I’ve ever seen without a broiler. Not a broiler that doesn’t work, but never had one (the things the builder did to save $10 are legend). Two or three times a year I really wish I had one — not often enough to buy a new stove, but often enough to kind of wish the old one would die and I’d have a reason to get a new one. Of course, this means that it will work flawlessly for another 40 years.

It’s important that you can latch the oven door shut, so that movement of the boat doesn’t allow it to suddenly pop open. It’s bad enough if the oven isn’t on and no one is standing in front of the door, somewhat more annoying if pans that are stored in the oven slide out, and downright dangerous if the oven is one and someone is hit first with the hot door and then by a pan of hot food. If it does not come with a latch, you’ll have to figure something out (some tie the oven handle to a grab bar in front of the oven but admit that it’s a pain to tie/untie all the time).

The second really nice feature on an oven door is what’s called a “slide away” door. As the door opens, it slides under the oven. This is a very nice feature for two reasons: the cook doesn’t have to lean over a hot door to put food in the oven, look at it, or take it out (a huge safety consideration considering that it’s easy to just slightly lose your balance on a boat) and when the oven is open, it’s still balanced — if you’re using the gimbals, opening the door otherwise changes the balance and the stove will tip towards the cook.

More than one person has commented that they like Princess Seaward ovens because they are porcelain enamel-lined as opposed to stainless, and thus hold heat better. I haven’t used one to have a personal opinion, but it seems reasonable that dark enamel would be better (it’s used on most home ovens); I don’t know if any other brands have this feature. Most boat ovens that I have seen are stainless — or at least that’s what I remember.

Many companies make a big deal about the fact that they have some sort of lighter built into the burners and oven. Most people that I know find that these fail frequently and, while they can be fixed, decide that it’s simply easier to keep a long-nosed butane lighter near the stove and light it the old-fashioned way. I wouldn’t choose one stove over another because of this feature.

Our first cruising boat came with a Force 10 3-burner stove and we never had a problem with it in the coastal cruising that we did. However, there are anecdotal reports of several failures of mounting and gimbal hardware in rough seas. If you are considering a Force 10 stove (or have one on your boat) and are planning blue water voyaging, please read this article — and the comments below it — on Attainable Adventure Cruising.

466 Shares
Some links above (including all Amazon links) are affiliate links, meaning that I earn from qualifying purchases. Learn more.