You are here: Home / Buying a Boat & Gear / A Better Boat Toaster 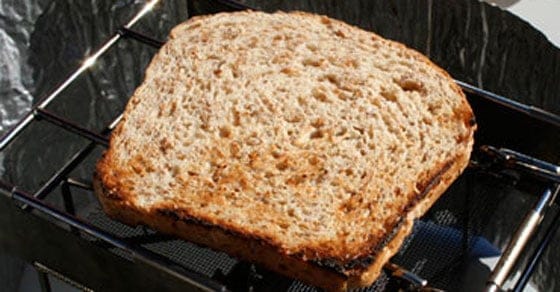 One of the first posts I wrote was about “toast without a toaster” — one of those questions that hits most Americans when they start sleeping on their boat and realize that a conventional toaster takes up a lot of space, does just one thing, and requires a bunch of power.  But most of us like toast for breakfast and wonder how we can have it without a conventional toaster.

One of the ways that I described was using a camping toaster that goes over a burner on your stove.  The bread sort of “stands up” at an angle over the burner.  While these work, they require constant attention so that the bottom of the slice doesn’t burn when the top isn’t toasted at all.

Last spring, aboard our friends’ boat in the Sea of Cortez, Robin had a much better toaster that she had bought just in the grocery store in La Paz.  To top it off, she said that it had been fairly inexpensive — she couldn’t remember exactly, but definitely under $10.  Here’s a picture of Robin’s aboard The Cat’s Meow — if you are in Mexico you can look for one of these.

So when we returned to the US, I looked to see if I could find a similar one.  Well, I couldn’t.  But I saw a similar one made by GSI (Glacier Stainless) at the Annapolis Boat Show, and then a couple of readers wrote to me about it, too.  They raved at several things:

Long-time reader Leslie LaBute, aboard Afeica, wrote  to me saying, “It works much better that a camp stove 4 slice toaster and cuts down on propane consumption.”  About the only disadvantage to this style of toaster is that it makes one slice at a time.

As can be seen in the photo below, it has a screen on the bottom which lets heat through.  You simply put it on the burner over medium-high heat and put the toast on the grate, and flip when the first side is done.

The GSI Camping Toaster is now my recommended toaster for making toast on the stove top.

You can buy one from numerous online merchants — in larger cities, it may also be available from large camping/outdoors retailers, but I have not seen it:

Primus makes a fairly similar toaster, but it costs more (see on Amazon).  There are similar ones available in other countries under other names, too.  The Argau — sold in Australia — looks quite similar to the one that Robin bought in Mexico.

600 Shares
Some links in this article (including all Amazon links) are affiliate links, meaning that we earn from qualifying purchases.