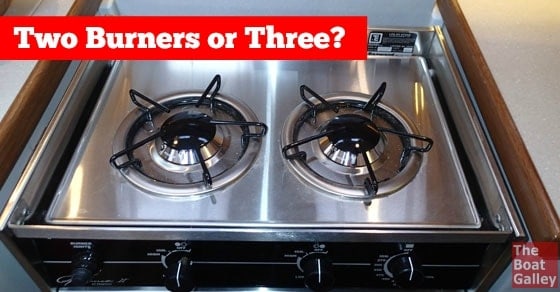 A big trend that I noticed at the Annapolis Sailboat Show a couple of years ago was the use of 2-burner stoves on almost all of the boats under roughly 45 feet.  I also saw this on some of the smaller power boats during the powerboat show.  (While I noticed it at the show, going from boat to boat, the basic issue is one to think about whether you’re looking at new boats, used boats or contemplating a new stove in your existing boat.)

When I commented on the number of 2-burner stoves I was seeing, my husband Dave asked why it was a big deal.  He asked how often I cooked with more than two pans.  And there are some advantages to a 2-burner stove:

For the last five years, I’ve lived on a boat with two burners. And while it works, there have been a number of times that I’d LOVE to have three burners. When I have to cook things in shifts, or change the menu so that I don’t need more than two burners. If you’re the cook most of the time, don’t let the non-cook convince you want.

But the number of burners isn’t the only difference between a 2- and 3-burner stove.  The 3-burner also has a larger oven.

The larger oven is good for several reasons:

The specs are slightly different for every stove manufacturer, but here’s a comparison of three models of Force 10 — the American Standard 3-burner, American Standard 2-burner and the European Compact 2-burner (which I saw in many boats).  Force 10 has other models as well — I choose these as being some of the most popular sizes.

Dimensions are outside measurements.  Space inside the oven is considerably smaller.

If you plan to bake in your stove’s oven — and admittedly, not everyone does — it’s important to realize that the stove size will play a big part in how satisfied you’ll be with your baking.  If you only envision baking rarely, you might actually be happier with just a stovetop instead of a stove with oven, saving what would otherwise be the oven space for storage, and get an Omnia Stove Top Oven for the times when you do want to bake.

Everything in a boat is a compromise and the space allocated to the stove/oven is no exception.  There are plenty of reasons to decide to go with a 2-burner stove instead of a 3-burner.  But when you make the choice, realize it’s not just a burner that you are giving up.

617 Shares
Some links in this article (including all Amazon links) are affiliate links, meaning that we earn from qualifying purchases.