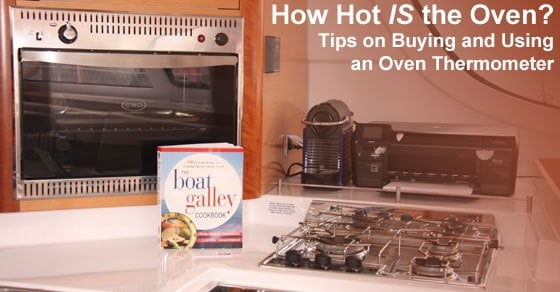 How hot is the oven??

If you think your built-in oven thermometer might not be accurate, or if you don’t have one at all, the best solution is to get an add-on one — they’re generally about $10.  I’ll suggest one I like below.  But that won’t help if you’re wanting to bake something right now — so I’ll also pass on a couple of tips from my grandmother, who used an old wood stove until she was in her 50’s and never quite trusted the thermostat on her new-fangled gas oven and always double checked the temperature with her hand.

Buying and Using an Oven Thermometer

An oven thermometer is really simple to add into your boat oven — “installing” it is just a matter of hanging it or setting it on a rack. You can usually get one in the housewares department at any “big box” store as well as lots of places online.

If you start reading reviews, you’ll quickly come to the conclusion that none of the thermometers are very accurate, and begin to wonder why you’re even thinking of buying one.  I think that some (most?) of the reported inaccuracies arise from where the thermometer is placed in the oven.

An oven thermometer is most accurate if you can set it on the shelf right where the food is to be cooked.

If you use a baking stone (highly recommended in a boat oven to even out hot spots), setting it on the stone is perfect.

If you want an accurate temperature, don’t hang it from a rack right over the burner in the bottom of the oven, or place it on the bottom of the oven, or stick it on a wall (despite many thermometers coming with mounting magnets just for this purpose — the walls are usually hotter than the air that the food is cooking in), or put it right at the top of the oven (heat rises, so it will be hotter there than on the rack where the food is cooking).

Several other features are important, too:

Finally, most oven thermometers are what is called “slow-reacting” – that is, the temperature readout doesn’t instantly drop when you open the oven door to look at it.  This is an important feature.  I’d also like one with big numbers, but the only one I’ve found with big numbers gets horrible reviews for accuracy, so I’m not sure that it’s just a case of bad placement.

My choice for an oven thermometer is available at Amazon:

I’m aware that it doesn’t get the best reviews of all the oven thermometers on Amazon.  It’s worked well for me, and it was also chosen by Cooks Illustrated in a comparison test.

My Grandma Phila and her sister-in-law, my great-aunt Martha were born before the turn of the last century.  Both were great cooks (Aunt Martha was the first Dean of the School of Home Economics on SUNY-Oneonta) and neither one of them ever believed that little light that signalled that the oven was up to temperature.  Cooking with them as a child, I learned to test the oven with my hand.

Now, you have to realize that with this method, you’re not going to be able to distinguish fine differences in temperature — say between 350 F. and 375 F.  Old-time cooks only had three designations for an oven: slow, moderate and hot.

Slow (also called low):  anything up to about 300 F., used for long slow cooking

To test, open the oven door and hold your hand in the center of the oven.  Begin counting slowly (as if counting seconds) until your hand is just too hot and you have to take it out.

Yes, this will be affected by your heat tolerance and exactly how fast you count.  But it will get you in the right ballpark.  And remember, lots of great food was baked long before there were oven thermometers — just keep a little closer eye on the oven!

66 Shares
Some links above (including all Amazon links) are affiliate links, meaning that I earn from qualifying purchases. Learn more.

What’s the scariest thing about cruising? Just learning to take that big leap. Here’s some encouragement. [More] Taking the Leap to Cruising

You don’t have to give up baking in the summer. Learn how I manage cooking & baking onboard on hot days. [More] How to Bake and Cook in the Heat