You are here: Home / Recipes / Shrimp 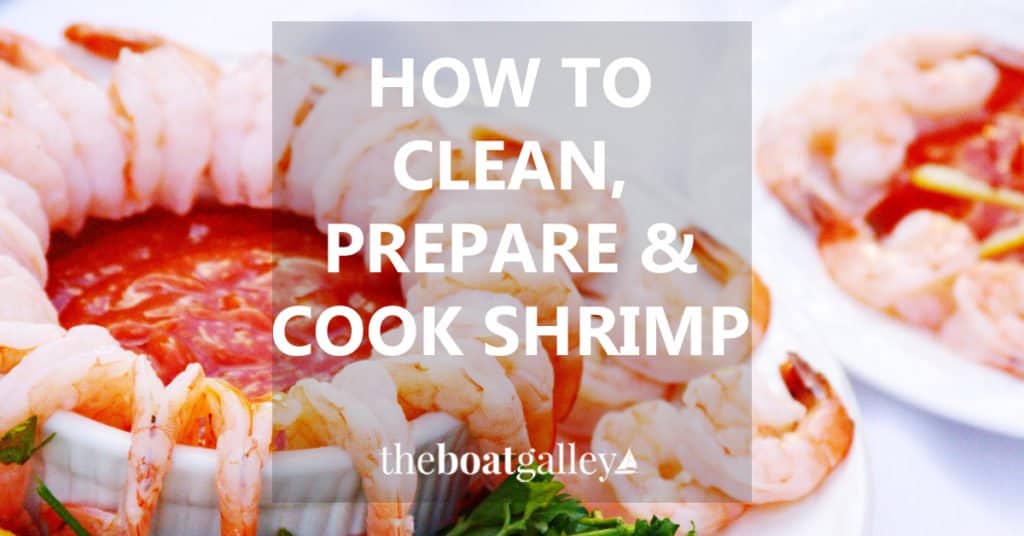 Aboard Que Tal, we loved it whenever we shared an anchorage with a shrimp boat — that meant there was a pretty good chance of having shrimp for dinner!  And in mid-July in the Sea of Cortez, when temperatures soared, we doubly loved shrimp as they took almost no time to cook and were a wonderful cold meal.

I really didn’t know what to do with fresh shrimp the first time we encountered a shrimp boat.  One pulled into our anchorage at Isla San Marcos (photo) and our friends Dick and Judi aboard Corazon called on the radio to say that they were going to dinghy over and see if they could buy some shrimp — did we want some?  Sure!

Dave went with them, armed with the suggested plastic bag.  Ten minutes later, he arrived back at Que Tal with about 10 pounds of whole shrimp.  Well, this was wonderful, but coming from the Midwest I didn’t have any experience with cooking or cleaning my own shrimp.  The last time I’d had shrimp had been at our wedding reception . . . and that had been catered.

I dragged out my trusty cookbook — my mom had always taught me that if you could read, you could learn to do anything — and followed the instructions for cleaning shrimp, then cooked about a pound and put the rest in the freezer (thankfully, it was pretty empty right then!).

The cleaning went pretty well, but, as with cooking scallops, I learned that the cooking instructions in my cookbook left them rubbery.  And again, I turned to other cruisers to teach me how to properly cook shrimp.  Over time, I combined advice and methods from numerous friends to come up with the following information on both preparing shrimp and boiling/steaming it.

De-Head the Shrimp. If you get shrimp from a shrimp boat, they’ll undoubtedly still have the heads attached.  Just take one shrimp at a time, grab the head firmly between your thumb and index finger and grasp the body in your other hand.  Give a quick twist of the head and it should pop right off.

Rinse the shrimp in cold water.

To De-Vein or Not? You don’t have to de-vein shrimp, but I prefer to.  The dark vein running along the shrimp’s back is its gastric vein.  Usually they’re small and most people don’t think they make a taste difference.

I simply peel the shrimp, then run my thumbnail under the vein to remove it.  Most people use a paring knife but I found that my thumbnail was much faster and I almost never broke or cut the vein.

My friend Jan, who I wrote The Boat Galley Cookbook with (she also has a website for part-time cruisers called CommuterCRUISER.com) has a little de-veining tool that she bought at Wal-mart.  She swears that it’s the easiest way to de-vein shrimp.

The first few times I cooked shrimp, I wanted to be sure that they were cooked through.  So I cooked them until they were pink, then a few minutes longer.  And then I wondered why they were really tough!

The number-one rule with shrimp is not to overcook them.  In fact, they’ll cook a little bit more even after you take them out of the water, so you want to cook them only until they are just turning pink.

If you get shrimp fresh from a boat, it’s unlikely that they’ll all be the same size.  So when I clean them, I try to separate them into rough piles by size.  This isn’t an exact science, just putting the really big ones together and the really small ones together, with everything else in their own pile.  Then I can cook ones that are about the same size together.

My cooking method is pretty simple — and one of the reasons that I really like shrimp in hot weather.

Boiled shrimp are a great hot weather meal — delightful tossed on a salad or as shrimp cocktail. The secret is in how you cook them.
Print Recipe Pin Recipe
Total Time10 mins
Servings: 4 1/4 pound servings
Calories: 119kcal
Carbs (g): 1

485 Shares
Some links in this article (including all Amazon links) are affiliate links, meaning that we earn from qualifying purchases.