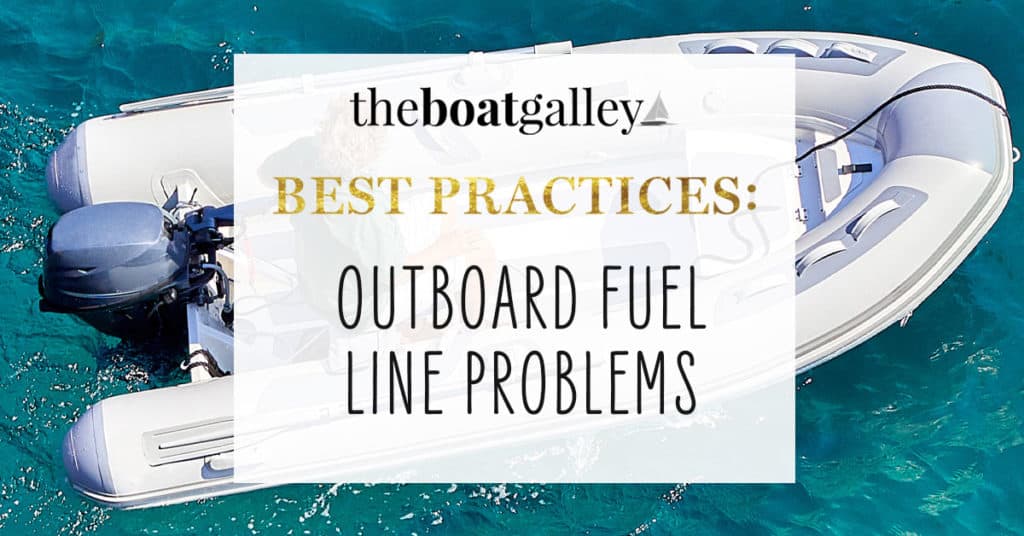 What is causing the rise in outboard fuel line problems? We’ve had problems with two hoses in the past three years.

A blocked outboard fuel line prevents fuel from getting to the motor. It generally starts with a partial blockage, where playing around with the fuel hose and pumping the primer bulb will get the motor to start or keep it running. But blockages don’t cure themselves. In a few days, squeezing the primer bulb does less and less, possibly getting to the point where there is no resistance in the bulb and it does not expand when released.

When this happened to us recently, the solution was pretty simple: a new hose.

PICTURES OF THE BLOCKAGES

I was curious about what had happened – both basic curiosity and wanting not to have continued problems.

Dave, my husband, began by trying to blow through the old hose. He couldn’t in two out of the three sections. That confirmed a blockage. Or actually, at least two blockages.

The first cut end of hose that I looked at didn’t seem to have a problem:

But the second one looked a little funny:

It looked like the inside of the hose had melted and twisted.

Turns out, these new hoses have a “non-permeable liner.”

And it can break free (delaminate) from the outer hose and twist itself up. Hmm, I didn’t see that liner in that first bit of hose that I saw. Wonder where it went? I split the hose lengthwise:

Hard to get a good photo, but basically the liner appeared to be totally wadded up. No wonder fuel couldn’t get through!

Everywhere we cut, we found a problem:

WHAT IS HAPPENING TO THE HOSES

In talking with clerks at the local NAPA store, West Marine, other cruisers and outboard mechanics, it seems that we are not alone in our outboard fuel line problems.

For the record, this hose was made by Attwood and is not quite 18 months old. We’ve used non-ethanol gas more often than not; when we’ve used gas with ethanol, we used a gas additive as well. I don’t remember the exact designation of the hose, but I remember when buying it that it was supposed to be okay for use with ethanol gas.

What I’ve learned (and this is all word-of-mouth and anecdotal):

Our “solution” was to get automotive fuel hose. Since it doesn’t have the UV protection, we may try to cover the exposed portions of the hose with tubular webbing or even just tubes made from old t-shirts to give it some UV protection. We’re still working on that.

Bottom line, however: carry replacement fuel hose and hose clamps! There is basically no sure-fire method to avoid problems either with the liner or UV damage. Either type of hose can have a problem.