You are here: Home / Living on a Boat / Getting to Know Your New Boat 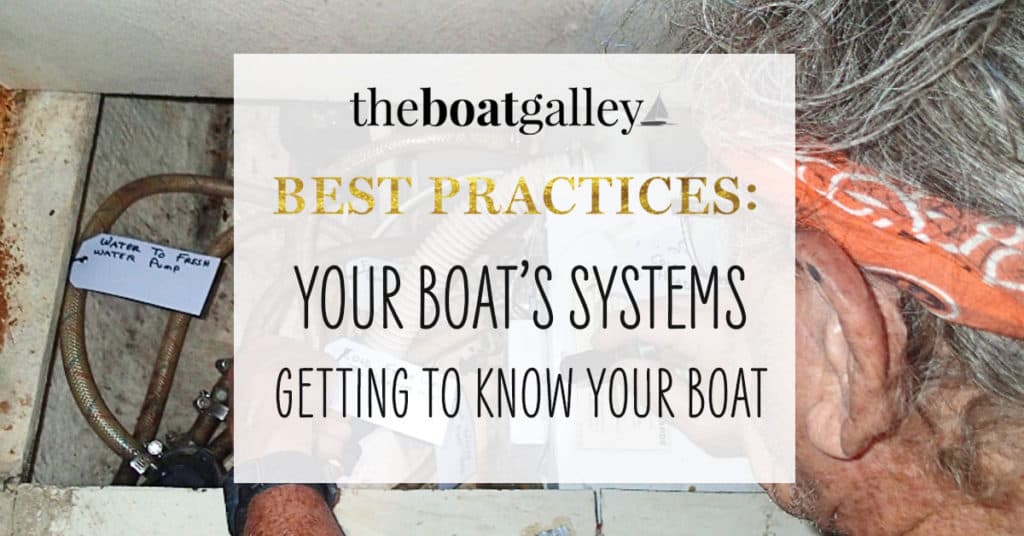 How do you get to know a new boat?

If you have recently purchased a boat, it’s easy to feel like you have no clue about how anything operates!  Ditto if you’ve begun a new relationship and your significant other has a boat that you’re suddenly trying to learn.

My husband, Dave, has a background in heavy industry (blast furnace supervisor in a steel mill).  He was the hands-on manager, who knew exactly how everything operated and was the first one called in an emergency just for that reason.

And when we bought Que Tal, I began to understand how he operated.  When we bought her, the boat was in Puerto Vallarta, Mexico and we were in central Illinois.  And when we made the “purchase trip,” the former owner was present and went over many of the systems with us.  I assumed that on our next trip to the boat, we’d head out of the marina for a few days at a nearby anchorage.

Dave had a different idea.  And frankly, his was much better.

How to Learn the Systems on a New Boat

Our next trip — actually, the next two trips of about a week each — we spent learning the boat right at the dock.  Together, we traced and sketched out every system on the boat and labeled it all. That way, when we left the dock and were out on our own, we felt that we really knew our boat and how everything worked.

To use a galley-specific example, we began with the freshwater system.  We started at the deck and followed the hose down to where it entered the water tank.  Okay, no filters on that . . . meaning that we needed to use a filter on the dock hose.  Then we traced each line out of the water tank . . . here’s one to the freshwater pump . . . hmm, there’s also a foot pump . . . this line goes to the head, this one to the galley  . . . here’s the filter for the cooking water . . . here’s the air vent . . . the drain and the seacock . . . and so on right to the thru-hull.  We labeled every hose one and drew in the direction of flow.

Several things were important about this:

Getting to Know Our Second Boat

When we bought Barefoot Gal, we went through exactly the same procedure. Admittedly, it went a lot faster as there were a lot of similarities to systems on Que Tal. And we did a lot of it while we were still working on the boat in the boatyard. Again, time very well spent as things went pretty smoothly when we launched for the first time.

Two Tips to Help You Learn

Okay, for us it was easy as we’d just bought the boat and neither one of us knew her.  But it often happens that there’s a new relationship, one person has a boat (and knows it) and the new squeeze starts going out on it, etc, etc.  Okay, you’re not going to go over all the boat systems on the first date!  But as time goes on and the relationship becomes a little more serious and you’re spending more time on the boat, I’d really recommend trying to go over the systems together.  I think that sketching them out for yourself — not just looking at drawings that already exist or taking photos — is the best way to really understand how things work.

I also know from our cruising days that there will be some who say “but I’m not mechanical!!  I’m not going to understand it!”  Don’t worry — you don’t have to be super-mechanically inclined to understand the basics of how the boat works.  And by tracing the systems instead of just trying to understand how something works in the abstract, I’ll bet that you find it makes sense.  O you know the basics of how things work, you’ll be a lot more confident in using them and dealing with any problems that come up.

Boat Systems You Should Know

Here’s a quick list of the main systems that I can think of to check out (different boats will have different items, leave a note in the comments of any you think I’ve missed):

While it might have been a good idea, we didn’t trace out all of the wiring initially but did as we worked on various items.

Take It Slowly and Go Back Over Systems

Okay, I know it seems like a lot.  Don’t try to do it all at once.  Take it slowly and enjoy learning about your boat.  Remember, you didn’t learn all about living ashore in a day. You just picked it up over a period of years.  Don’t expect to know everything at once about the boat.

While everyone’s learning style is different, Dave and I found that after each of our times on the boat, we’d go back home and read more about the various systems both in books and on the internet. Things that had seemed incomprehensible to us before suddenly made sense.  Our confidence at being able to master this new lifestyle just soared!

A final note. Most boaters and cruisers that I talk to all say the same thing:  the first year is by far the hardest.  There is such a learning curve.  Other boaters are one of your greatest resources. While it was hard for Dave and me to ask for help, many times we found that there was an easy solution for what we thought was an almost insurmountable problem.  And in time, we became the ones that were offering help instead of always asking for it!

This article was originally written on March 25, 2013. It was updated, expanded and republished on January 10, 2019. Older comments were not removed and may not apply to the current version.

4.8K Shares
Some links in this article (including all Amazon links) are affiliate links, meaning that we earn from qualifying purchases.