You are here: Home / Worries & Concerns / Hurricane: Stay On the Boat or Not? 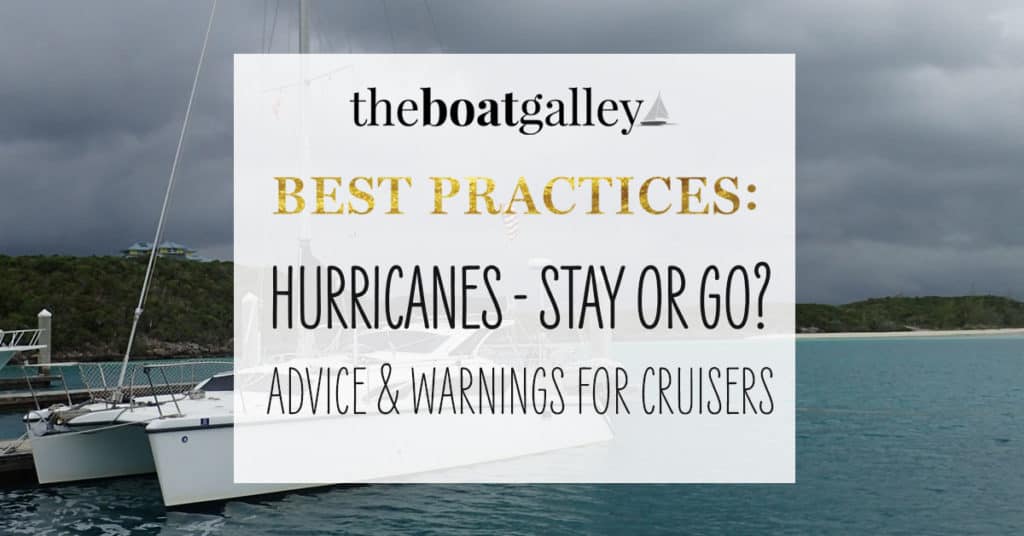 One of the questions that I am often asked about hurricane prep is whether it’s best to stay on the boat or go ashore.

Deciding To Stay On the Boat or Not

My answer is simple:

Seek shelter ashore if at all possible; stay on the boat only if it offers better shelter than anything ashore.

In 2003, we went through Hurricane Marty aboard Que Tal, our Tayana 37. Yes, aboard.

Marty’s eye passed directly overhead as a Category 1 storm. We had anchored in Puerto Escondido, an excellent hurricane hole in the Sea of Cortez. At the time, there were no sturdy buildings ashore (there are concrete buildings there now). The nearest town was 15 miles away, with hitchhiking the only way to get there as the storm closed in. So we stayed on the boat.

We didn’t know if we were taking our lives in our hands or if we’d be able to help Que Tal protect us. Obviously, we survived, as did everyone on the other occupied boats. And in one sense, it wasn’t that scary: we did what we had to, as we had to. But having gone through it and then having seen the aftermath, I would not recommend it at all.

I will never stay on a boat during a hurricane again if there is any reasonable option ashore. But since I’ve done it, I’ll say a few words about staying on the boat.

If You Have to Stay on the Boat During a Hurricane

If there isn’t a viable option ashore and you stay on the boat, the question becomes should you just hunker down below decks or stay on deck. Admittedly, once the winds hit 35 knots or so, there isn’t much you can do. But there are some things you can do to help your boat and yourself.

Perhaps I should first offer a clarification: when I say “stay on deck” I’m not meaning that everyone aboard will be on deck all the time. One person on deck, tethered in the cockpit, on watch.

And keeping watch is probably the most important thing to do. Are you dragging? Is another boat dragging toward you? If you can’t dodge it, you may have to call others on deck to prepare for a collision . . . or a grounding. At the same time, if there are too many unsecured objects flying through the air, everybody may be better off staying below. There are no rules as to what is the best course of action; you have to react to what is actually happening around you.

If you’re going to be on deck, you have to be prepared for it. Hurricane-force winds with torrential rain are ferocious and can result in hypothermia. Our foul weather gear was simply insufficient. Wetsuits kept us much warmer. Wearing our dive masks enabled us to keep our eyes open in the driving rain and it was actually easier to breathe through our snorkels.

One important thing for anyone who is on a boat during any storm, not just a hurricane: wear shoes all the time. If you have to abandon the boat quickly, or if it should suffer damage, you do not want to be barefoot and you are not going to want to look for shoes. Wear sturdy sandals or sneakers, not flip flops. It’s also a good idea to have some sort of waterproof light — a small flashlight or a glow stick.

How Can You Help Your Boat During a Hurricane

During Marty, boaters generally agreed that trying to motor forward on their anchor to relieve the strain actually did the opposite: during lulls, slack would develop in the chain, then gusts would slam the boat back hard on the anchor, threatening to break it out. But if your anchor was dragging, motoring could definitely keep the boat from grounding. Most ended up running the engine in neutral at the height of the storm so that they could put it in gear instantly if needed.

Other boats dragged and didn’t have sufficient engine power to make headway against the storm. But they were able to slow their rearward progress and they could steer sufficiently (yes, while sliding backward) to avoid hitting other boats and hooking someone else’s anchor with theirs. They also could “pick” where they went aground to a certain extent, avoiding rocks in favor of sandy beaches or mangroves.

Is the Hurricane Over?

And one more note about hurricanes, which takes on additional importance if you’re staying aboard: it is very hard to know where the storm center is in relation to you. Your standard weather sources are very likely to be knocked out. Don’t count on the storm going where it “was supposed to.”

Hurricane Marty’s eye was forecast to pass to the east of our location and when the storm suddenly let up, everyone in the harbor thought it was over. Instead, we were in the eye and 30 minutes later we were going through the second eyewall.

Lesson: if it gets too good too fast you are likely in the eye. What do I mean by “too good, too fast?” Well, basically, for what the conditions had been and how long it took to build to those conditions. For example, if the storm built to 70 knots and a total white out over a course of 6 hours, then the wind goes to almost 0 in the space of 5 minutes (our experience in Marty), it’s too big of a change too quickly. If you suspect you’re in the eye, make any repairs or fixes that you need to, but make them quickly and be ready to be back in storm mode at any minute because when the second eyewall hits it will get ugly quickly.

Friends took the following two pictures of Que Tal (the sailboat) about 20 minutes apart — one, just as the eyewall was about to hit (it was a total white out as the eyewall hit) and the second one in the eye (you’ll notice that Que Tal is facing the opposite direction as the wind changed 180° as the eye passed over). We should have realized that the storm was not over, wishful thinking got the better of us.

563 Shares
Some links in this article (including all Amazon links) are affiliate links, meaning that we earn from qualifying purchases.