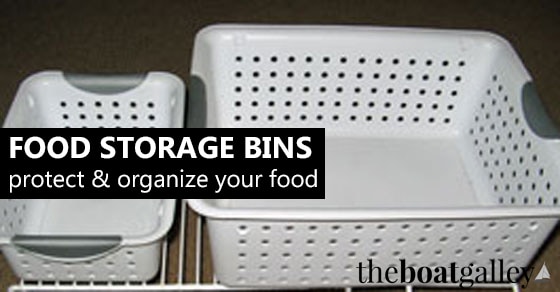 I highly recommend using bins to organize lockers and your refrigerator.   They’ll not only keep like foods together, but they’ll keep cans from rolling and packages from sliding . . . and, should anything break or leak, at least the mess will be contained.

What should you look for in your bins?

Size. Size is a two pronged question.  First, will the bin fit where you want to put it?  Not just will it fit in the locker (and through the locker opening), but will it fit tightly with other bins in the space?  The tighter they fit together, the less they’ll slide when underway.  This translates both to less noise and less chance of something being damaged.

Second, the bin has to be properly sized for whatever you want to put it it.  You’ll need a combination of larger and smaller bins, shorter and taller.

Ventilated or Not. For most items, I prefer ventilated bins so that there is some airflow around whatever is being stored.  In lockers, this will result in less mold and spoiled food, particularly for produce.  Other food containers will also benefit from air circulation, too.

In the refrigerator/freezer/cooler, air flow and ventilated containers are essential to allow the cold air to reach the food.   While solid containers will eventually get cold, using them will result in uneven cooling.

There were a few times that I could not find a ventilated bin that fit a space.  I soon learned that I could add air holes to most solid bins — and I learned that it was a LOT easier to make “squarish” holes with a Dremel tool than try to use a drill on plastic!

Solid Bottoms. Regardless of whether the item needs a ventilated bin, solid bottoms are a real must, for several reasons:

Plastic. Plastic bins are easy to clean and can be quickly sterilized with a bit of bleach water.

Shape. While the height of the bins will be determined by the space available and what you’re planning to store in the bin, virtually all storage spaces have square corners.  And therefore, square or rectangular bins make the best use of the space.

Handles. Handles are nice on bins that you move around frequently, but they do take up space.  Unfortunately, the reality is that it’s very hard to find bins that don’t have handles.

Lids. I only used lids in three instances:

Rugged Construction. How sturdy the construction has to be depends somewhat on what you’re going to store in the bin.  For example, a bin holding canned food is very susceptible to damage as the cans rock or slide with the motion of the boat.  Bins that you frequently move to get to something underneath them, as well as bins with another bin on top are more likely to crack.  And bins that are overcrowded will easily break.  In these situations, heavy duty bins will really pay off in the long run.

If you’re starting with an “empty” boat, it can be a daunting task to find all the bins you need.  And good ones aren’t cheap!  However, I learned my lesson that trying to get by with fewer bins, and buying lower quality ones, just didn’t work.  I lost several bags of flour that split after sliding in the locker on an overnight passage (the motion chafed through both the outer plastic bag and the inner paper bag).  On that same trip, canned vegetables cracked a lightweight bin.

Further, if you’re planning to cruise outside the US, it can be difficult to find high-quality bins in other countries.  Where we were cruising in Mexico, I could find plenty of less ruggged containers, as well as lots of very large solid bins.  But I never found the high quality organizing bins that I could get in the US, and so I ended up making do, holding broken containers together with duct tape and using waste baskets with holes cut in them.

Luckily, when we had first moved aboard I had bought a bunch of Sterilite bins (without lids) and had used them to transport things to the boat, then used them in the boat.  I quickly learned that they were cherished possessions!  The previous owner had also left a couple of really good Rubbermaid bins.  I highly recommend either of these — most of the other brands I’ve had a chance to look at recently just aren’t as good . . . but you may find something that I haven’t seen.

While many of these bins are available at Wal-mart and Target, here are links to them on Amazon so that you can see the styles I like (sometimes Amazon’s prices are better than local stores, sometimes not):

Wire bins don’t work for most items — they create pressure spots along the wires.  Ventilated “milk crates” also tended to have pressure points from the ridges (and most have open bottoms).  For small, lightweight items — particularly in small lockers — I successfully used rectangular juice bottles with the tops cut off and the cut edge reinforced with duct tape.

563 Shares
Some links above (including all Amazon links) are affiliate links, meaning that I earn from qualifying purchases. Learn more.