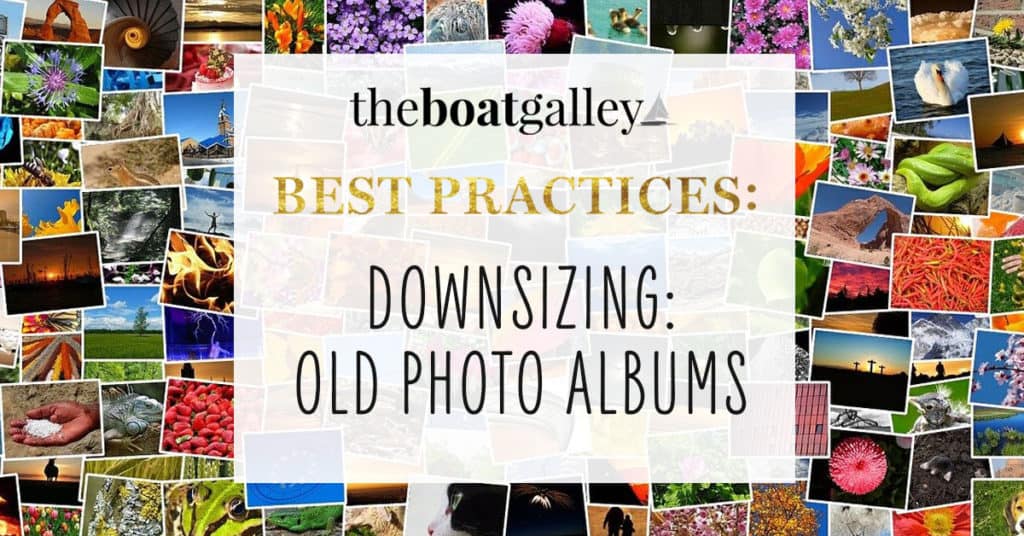 One question that comes up frequently in the context of downsizing to move aboard is what to do with old photo albums? No one wants to throw them away — in fact, most of us would love to take some with us, except for that space problem.

Before we left to cruise the first time, I went through all our old photo albums and scanned our favorites — several thousand of various family members, trips we’d taken, houses we’d lived in and so on.

It was a big job, using a flatbed scanner and doing one at a time. Even though I had what was, at the time, a “fast” scanner, it still took several minutes per photo to scan it and save it.

Yet it was one of our best downsizing moves — I am so glad to have those photos with us. I keep a number of them on my phone and it’s surprising how many times as I’m talking to someone I pull out a photo to show the boats we raced on or a trip we went on. And every so often we play them on the laptop as a random-order slideshow and reminisce.

Scanning them also means that I was a lot less nervous about putting all the old scrapbooks into a storage unit — I know that should something happen to them, I’ve got copies. Just to be sure, I keep two backup sets:

The good news is that there are much faster scanners available now, and better software that automates a lot of the process (the other option is to send the photos to a scanning service but they are expensive at about $1 per photo and there is the risk of the box being lost in the mail).

Karen, a reader, and I had a couple of notes back and forth about “what to do about photo albums” a few months ago and I’d almost forgotten about it until I got a follow-up note last week. She wanted to tell me about the photo scanner she’d gotten and how much easier the job had been than she anticipated.

The Epson FotoFast FF-640 (Amazon) has a photo feeder that will handle up to 30 photos at a time, and scan them in about 1 second each — plus detect if there is writing on the back (and if so, scan it), organize the photos and even send them off to an external drive and/or cloud storage. To top it off, the software with it will automatically restore images — fixing faded colors and so on. Karen said it did an excellent job on her photos.

It’s not a cheap scanner, but it makes the job enough faster that I’d say it’d be worth the price if you have a number of photos — and it’s still less expensive than using a scanning service.

IMPORTANT: I haven’t personally used this scanner as I did all my old photos years ago. In addition to Karen’s liking it, however, I notice that it gets good reviews on Amazon.

Several things to note about using the scanner:

Admittedly, it’s still not an afternoon project as you have to take the photos out of their albums and so on. But it’s no longer a “dreaded” job.

If you’re starting to plan your moving aboard and casting off the dock lines, this is a great project to take on early in the process. Later you’ll be tying up all sorts of loose ends and won’t want to take the time for it, but I guarantee that once you’re aboard you’ll be glad you did it.

236 Shares
Some links in this article (including all Amazon links) are affiliate links, meaning that we earn from qualifying purchases.