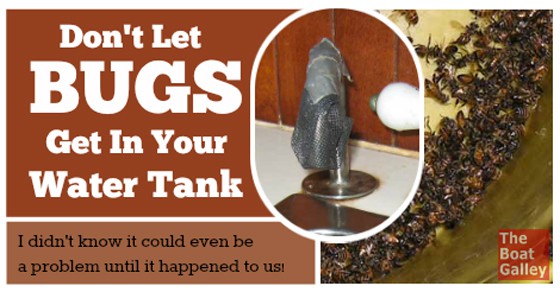 Every boat has an air vent somewhere for the water tank.  And bugs soon learn that they can get a drink from these.  In the Sea of Cortez, where we spent a lot of time, it was bees that were looking for fresh water.  Cruisers in other areas have told me of problems with mosquitoes, ants and moths.

On most boats that I’ve been on, the air vent is the overflow spigot located by a sink – the spigot you watch when filling the water tank to see when the tank is full.  But it’s also possible that the air vent is on deck somewhere or, on occasion, in the bilge.  On our boat, it was a spigot in the head.

For some reason, these vents are often made without a screen over the opening, which most regular faucet spigots do have.  And thus the bugs can not only get a drop of water right at the opening of the air vent/overflow spigot, but they can crawl inside.

Some will make it into the tank, where they most likely drown, and others may get stuck in the vent and die right there.  That’s how we even discovered this problem.

We were in an anchorage where there were bees.  They had come to the boat looking for fresh water (we knew this as they were all around a bucket that had a few drops of fresh water in it — see photo — and were almost fighting over each individual drop of water in the bottom).  We knew from past experience that they wouldn’t sting us if we didn’t bother them and they’d leave at sunset.

We got the boat closed up and shoo’d out the few bees that had come inside with several mosquito coils, and didn’t really think any more about it other than to plan to move to a different anchorage at first light, before they came back.

As I was cooking dinner, I needed water and turned on the galley faucet.  KA-BOOM!  No air was getting into the tank to offset the water I was taking out – basically an air lock – and the tank walls were sucked in.  The sound was unmistakable as the metal tank flexed.  Dave and I looked at each other in surprise and I quickly turned the water off.  How in the world could we have a air lock in the water tank?

The first clue as to the problem was the back end of a bee sticking out of the overflow spigot.  We assumed that one had gotten in there and gotten stuck, and he had blocked the air.  We removed him with a pair of tweezers and tried running water again.  Nope, we still had the problem.  We pulled more bees out, then had to use a pipe cleaner to clear the bend in the spigot where we couldn’t reach with tweezers.  It seemed that quite a number of bees had gone up the spigot.  Eventually, we got the entire vent clear, evidenced by the tank popping back into its normal position when air finally got through.

I’m sure there were bees in the tank, but they wouldn’t show up in our drinking and cooking water, thanks to our water filter.  It also removed microscopic traces of them as well as any bacteria that might accompany them.  And the screens on our regular faucet would catch any “bug parts” in the water we used for other purposes – we had to clean them out several times over the next few weeks.  YUCK!

We did not want to have to deal with this again.  So how to prevent the problem in the future?  Obviously, if it had happened once, it could happen again – lots of anchorages had bugs that would come aboard for a drink and we couldn’t totally seal the boat up 100% of the time.

We came up with a very low-tech and cheap solution:  a piece of mesh screen duct-taped over the spigot.  In doing this, you have to be careful that there aren’t any un-taped gaps where the mesh is pleated around the spigot, or bugs will still get in – they’re extremely resourceful!

I’ll admit that this is not the prettiest installation – but it works.  I’m sure that handier people can come up with ways to make it look nicer.  If you do, please add a comment with your idea or send me a photo and I’ll post it here to inspire others.

If you’re not 100% positive that your tank air vent has a screen already incorporated into it, go check it now — before you have a problem.  And if it doesn’t have a screen, tape a piece of mesh screen over it!